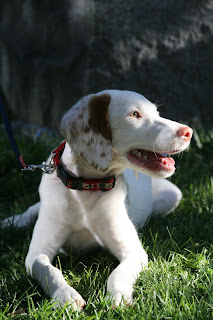 Yes, this is a post that is entirely based on pictures of Tess. 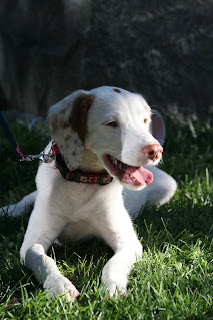 We had a social BBQ at school yesterday afternoon, and a classmate took a ton of pictures of the dogs present, including Tess. 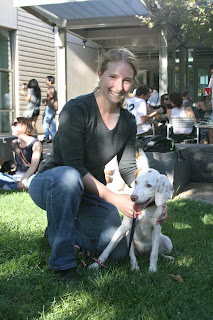 Tess did well – especially considering she’s just 5 months old. I did let her off leash to play, but made sure she checked in often. There were a TON of dogs there and it was nice to see that she interacts appropriately with unknown dogs and maintains a decent recall. Her puppy brains didn’t instantly bleed out of her puppy eyes the minute she was allowed to play. 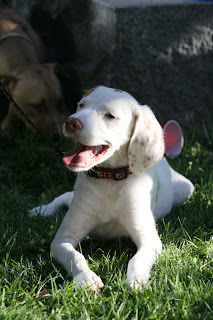 Her obedience is coming along very well. The only area I’m unhappy with is her leash work. She’s “OK” at the heel – meaning she doesn’t pull on me – but I don’t like how her position creeps forward. She HATES her gentle leader – so we have a deal. As long as she’s responsive to heel, the gentle leader remains in my pocket. BUT, if she’s naughty, the gentle leader goes on, but the leash doesn’t get attached unless she continues to ignore my requests to heel….

I’m looking for an obedience class as prep for doing agility with her. I need to introduce the clicker soon (that’s the method favored by the agility instructor that I want to work with). I’m considering working the “heel” with the clicker and see if that can positively reinforce the command.