UPDATE: I found her this evening in the bushes of a neighbors house.  Was on the porch and when I called her, immediately ran and hid (typical for this cat, very shy).  Would look at me but very hesitant to come forward so I ran into the house for a can and a canopener.  She’s never been on wet food in her LIFE, but because when I originally accepted her company at the Wild horse Sanctuary I lived and worked at I used to share my can of tuna with her, I think that’s why she comes running at the sound.  Sure enough, it worked like a charm, she came to me, and is recuperating in the bathroom where she won’t be stressed by the activity of the household.  Hopefully if she gets outside again, she’ll be familiar enough with the neighborhood that she’ll stay close again.  WHOO HOO! 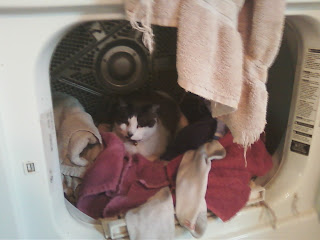 Just wanted everyone to know that my cat is is missing.  Obviously none of you are local and I don’t expect search parties are anything!  But I would appreciate good thoughts being sent her way.  I’m leaving for a week out of state in a couple of days and it’s now been officially 24 hours since she went missing.  She was a feral that chose me almost 10 years ago and has chosen to be a house cat since then, although for a couple of years she did have to be a ranch kitty while I finished college!  She slipped out of a screen in the bedroom that had a tear in it wednesday early morning and I haven’t seen her since.  She’s a shy cat that likely hid somewhere and i fully expected to see her that evening but so far no luck.  She’s wearing a safety collar and is easy to identify so I’m hoping that if I leave a message at the pound i have a good chance of getting her back if she was picked up (instead of “random tabby”).  Of course she’s the only pet I have that isn’t microchipped! I’ll update this with a picture of Mickie once I get home. I can’t figure out how to post blog pics from the iPad and my email posting isn’t working right now.