Happy new years to me! First trail ride of 2013 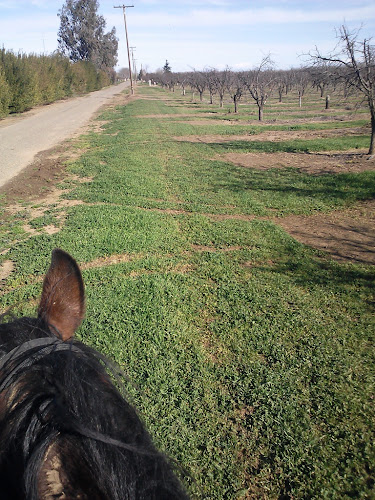 Let’s start with a Farley update.

I haven’t ridden Farley on the trail since she bucked me off in October. October!!!!!!! It really has been that long. We’ve done some free lunging and turn out, and 2 rides in the arena at walk trot (dressage) since that time. Some of it was me –> illness, school, etc. Some of it was her –> lameness (that old wire injury aka “abscess” and some was neither –> an unfortunately wet Christmas break.

She’s looked super super absolutely sound in the arena during turnout and lunging so a couple days ago (Monday) I jumped on for a couple of minutes and confirmed that she’s really really perfectly sound in the saddle at a trot, even when asked to do some on the haunches, tight dressage moves. Time to take it out on the trail.

Yesterday was PERFECT weather if a bit windy. I joked with the high schooler as I mounted up that it was the first time that we had been out in 3 months and (hahahahaha……) she had bucked me off last time.

I kinda of regretted it when I saw the look of concern on his face and realized that it would be highly embarrassing to be “rescued” from my stupid fat short pony just because we were out a bit longer than usual because we were having fun.

Farley really is a good girl, even with time off. She’s not mean or malicious or deliberately unkind. I wouldn’t have kept her through vet school if I couldn’t ride her sporadically. During out October “adventure” it was 100% my fault for coming off and was an example of pure stupidity on my part.

Which I made a pact with myself to avoid such mistakes on this ride.

1. I was in my saddle with seatbelts (ie the aussie).

2. I had no intention of cantering. In fact, I wasn’t sure we would make it to a trot. She hadn’t necessarily been BAD during those 2 arena sessions….BUT she also didn’t give me ANY comfort level that she wasn’t willing to do some airs above ground if given the right opportunity. I didn’t plan on giving her that opportunity.

3. It may have been mostly flat, but since we ARE conditioning, I was planning on making her little butt WORK – ie travel correctly, stepping underneath of herself and plumping that hind end back up. Giving a smart talented horse something to think about as you ride along (be rounder, push harder, go lower) is a GOOD THING.

The picture at the top of this post was taken a few steps off the barn property and after attempting to sign up for a GPS tracking thing on my smart phone, and realizing that “signing up for a new program on the smart phone with one hand and not looking where I was going” went solidly into that “being stupid” category, I decided I didn’t NEED to know how far and how fast and put the phone away.

40 minutes later it was safe enough to take the picture below –>; 40 minutes of some really nice trotting on a beautiful day, on a horse that was being “good enough”. Who could ask for me? 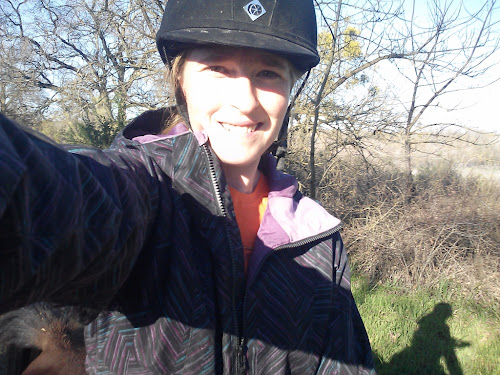 Farley, apparently wanted more.
45 minutes into the ride we encountered the best footing so far. It was beautiful. I was riding on the edge of orchard land that had recently had the trees pulled out and the ground totally and beautifully disced and prepared for the next orchard crop to go in. It was better than any dressage footing I’ve ever been in –> neither too deep or too hard, even, flat and instead of sand the most perfect dirt you can imagine.
Farley wanted to canter.
The last time I conceded to her cantering wishes I got bucked off. And I’m miles from home.
Uhhh….absolutely no way.
Farley promises to be good. She gives me a beautiful dressage trot with her head low, her back up, and with very little tension.
I relent. The next mile is some of the nicest 3 beat, balanced, non-fussy canter I have EVER had on this horse.
What a gift.
I’m more sore than I want to admit after that ride yesterday, but that’s OK. Nearing home I reflected on the time off that we both had, unplanned as it was, and I decided that we both needed those 3 months. I thought we were ready to go back to work after our LD last fall, but now I truly believe that for some reason, a little more rest was needed. I’m not sure why, and I might never know –> but yesterday I realized that now, 2 years post injury (Farley, not me) I don’t feel like I’m on the edge of doing too much.
I was talking with a fellow endurance rider and I joked that Farley and I were on the “vet school” training program, which looks a lot like the training plan that one of my very first endurance friend uses to get to Tevis each year –> lots of rest, rides when possible, and honest evaluation of the horse’s readiness using just a few key rides during the year.
Posted with Blogsy

2 Responses to Happy new years to me! First trail ride of 2013