Home » Uncategorized » What did I accomplish this year?

What did I accomplish this year?

Before we get into the post today, just wanted to say that I actually took a good look at Farley’s feet yesterday, ~10 days post Tevis and DANG they look good.  I think that’s my favorite part of riding a 100 in strap ons – the hooves just look incredible afterwards (in glueons they are always feel a bit soft and are smelly).  There’s a ton of growth, and the retained sole that I’ve been glaring at for the last couple months is falling out, and the hoof that is the “High” of the high/low is actually wearing heel and the hoof that is the “Low” is actually wearing toe.  So Cool!!!!!!!!!  If an argument could be made of riding a 100 miles being beneficial to a part of the horse, hooves would definitely be the winner.

Since Farley got hurt and I started vet school in 2011, I haven’t posted my normal “goal” posts.  It’s hard to have exciting goals that I feel like striving towards when both time AND money is severely limited, and I didn’t know whether Farley would hold up under a 50 mile effort, never mind a 100 miler.  But, it turns out I’ve had quite the successful season.

This year was all about tying up loose ends and being a part of endurance in a bigger way than just riding the rides.

I think as far as doing rides my season is done, but as you can see, I still have an item or two to check off the list.

Farley’s 1,000 miles is probably the achievement that means the most to me. 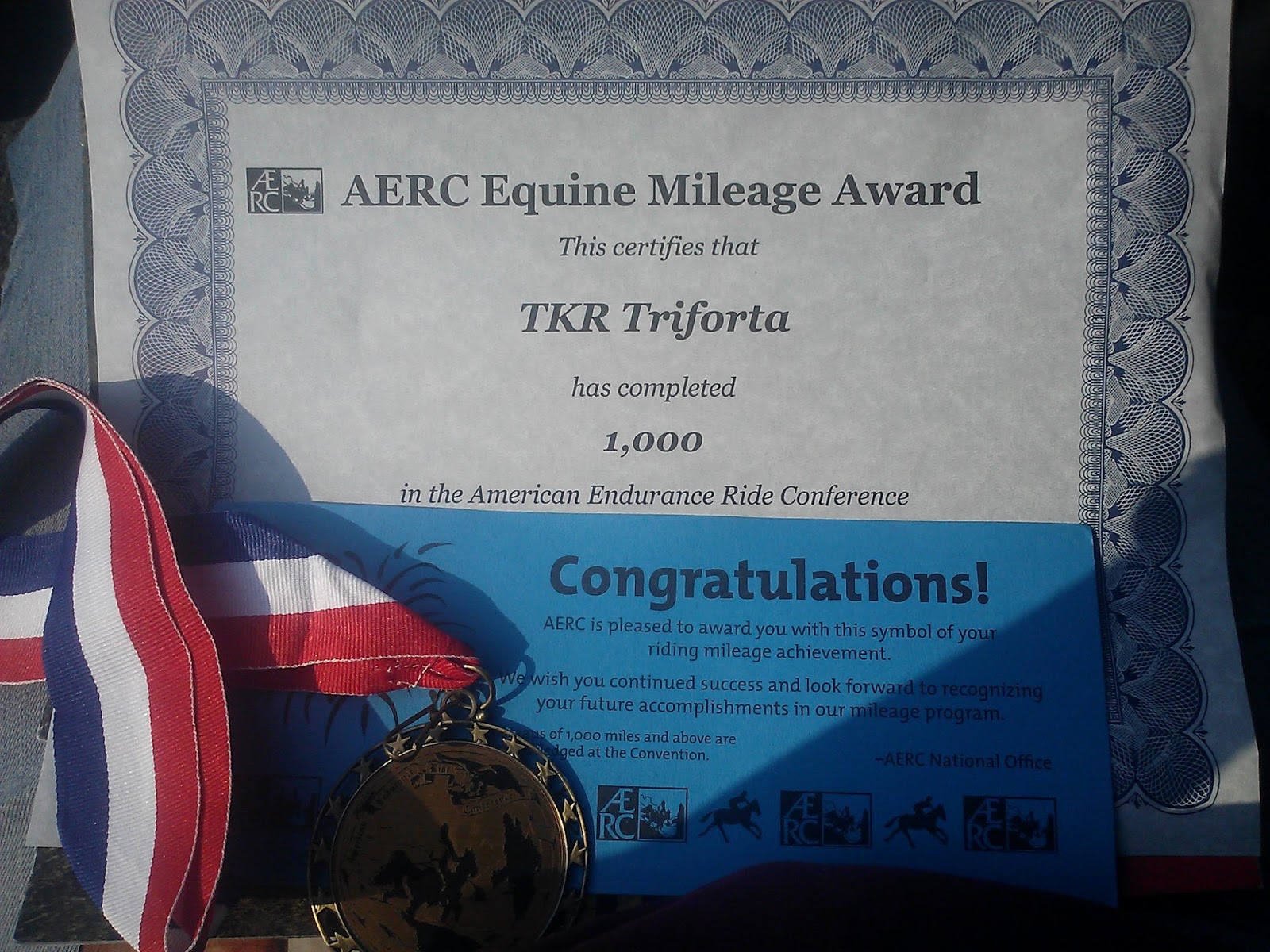 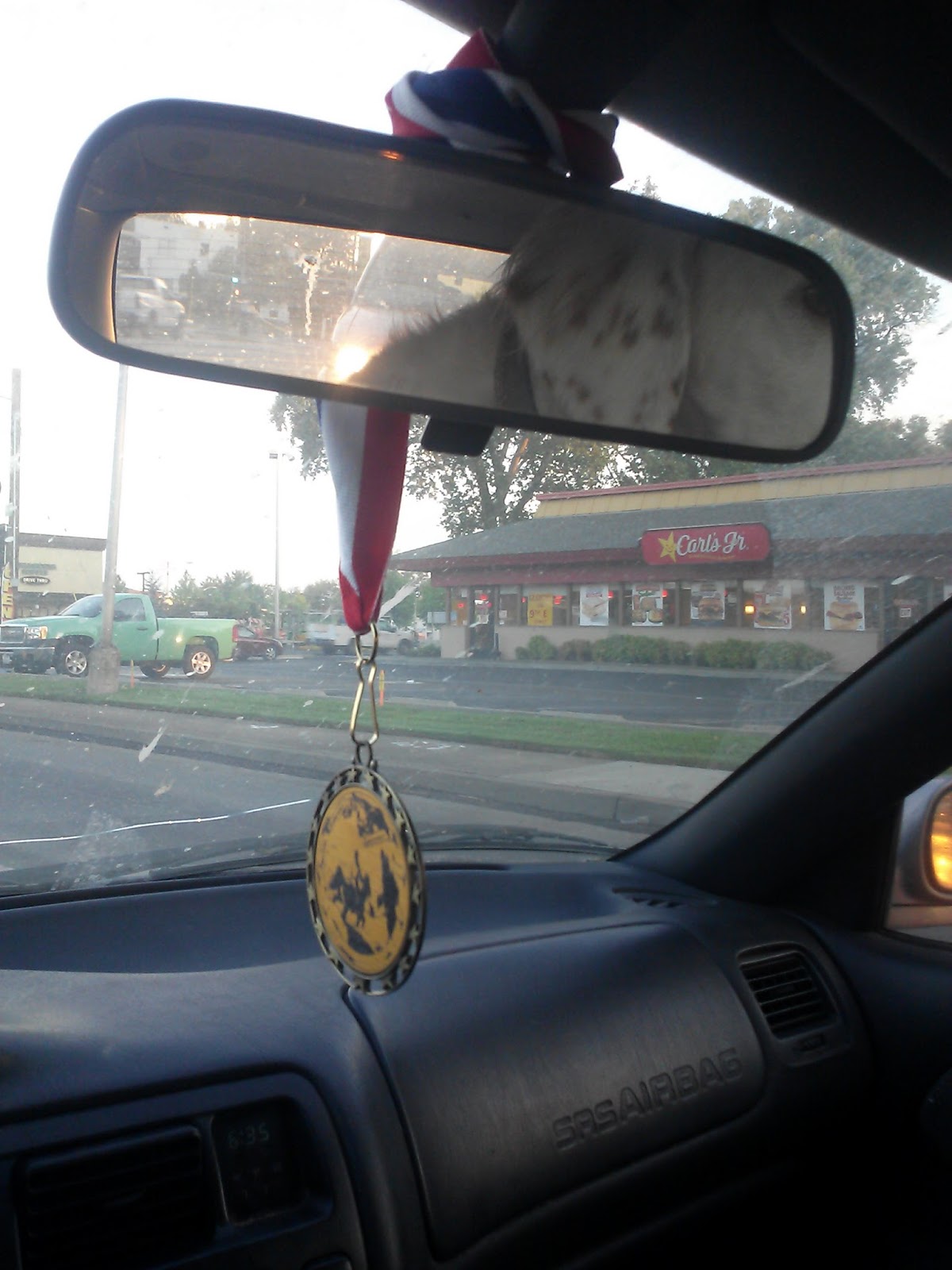 I can’t bear to put it away, so it may be the first thing that has ever lived on my rear view mirror.

Of all my riding related goals, this was the one I knew was the most doable, and it was the one I cared the most about.  When I started the season, I was 3 50’s away from Farley having 1,000 career endurance miles.  When she got injured at 20MT in 2011, that was the goal I most regretted possibly never being able to achieve, and it was on the top of my priority list if we ever did endurance together again.

When I got lost on the first day of Wild West I was so pissed at myself and kept telling Farley how sorry I was that she had a moron for a rider.  I knew there was a good chance we were doing Tevis that year, and the odds are not “ever in your favor” for finishing Tevis, so I couldn’t count on the miles there.  After Tevis we were done for the season, and so by having to RO at WW I was letting that 1,000 mile achievement slip away for yet another year.  A lot can happen in a year and there are no guarantees that me and Farley will have another season, or a season after that – sh*t happens.  Of course, we know the ending to the story – I was convinced to go on after learning the trail was short, went out the next day and Farley had her 1,000 miles.

But, the point is: as much as this award means to me, I was willing to let it go this season if I couldn’t do right by my horse in the process.  And I think that’s what I’m most proud of.  I earned this award, even while being determined to pull Farley at the *hint* of NQR in any of the last 155 miles.  That wasn’t always true over the course of these 1,000 miles – Before I was willing to manage through minor issues, and thought many of my less than “A” scores were “normal”.  But, my perspective and goals are different now, and while I know I’m a competent horseperson enough to managing issues during a ride, now I realize that I don’t want to if I can’t feel 100% good about what I asked my horse to do  when I look back over the ride.

3 Responses to What did I accomplish this year?