Home » Uncategorized » The lesson of 2 horses

The lesson of 2 horses 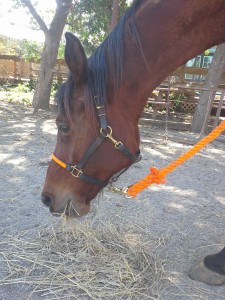 I pulled Farley out to give me a hand with Tig today.

Farley: My contract explicitly states that I get 2 weeks off after a 50.

So, for a double portion of mash Farley put on her game face and took care of business.

With my 50k in 7 days and my required rides for Tig met, I’m trying to minimize risks of being injured or tweaking something, which means riding the 15 year old, not the 4 year old if possible.

I have no idea if Farley ever ponied or was ponied before I owned her (edit: breeder just let me know that Farley was ponied extensively when she was on the track as a youngin’ but doesn’t know if she ever ponied other horses), but like everything else I’ve ever asked of this mare I said “this is what I need” and she said “I’ve got this”. No drama, no fuss – just making the right decisions in the moment, even when I’m distracted/compromised enough that I just need her to read my mind and do it.

Farley isn’t a very social horse (she definitely appreciates her friends, but really could care less about being part of a herd dynamic) so the first time I ponied Tig about a month into her time with me,  I had Farley’s buy-in in keeping this a strictly business relationship. I got everything prepped, approached with Tig on a leadrope,  jumped in the saddle as fast as I could and started moving.  No hello’s, no sniffing, no sorting stuff out (and especially NO SQUEALING). Especially because I suspect that left to the natural order of things Tig would be dominant over Farley and that would make ponying potentially very complicated.

It was the first ponying ride where I realized what a good tool having an older and more experienced horse is. Tig quickly figured out that moving ahead of Farley’s shoulder or trying to take liberties got pinned ears from Farley and a growl and pop on the leadrope from me. Any silliness quickly resolved itself as Tig realized that she better save her energy for moving forward because that is what we were doing!!! On that first ponying ride that lasted about 30 min, Farley taught Tig to lead and and where her place should be better and more thoroughly than I had been able to – and it was cool because I was there too reinforcing what Farley was teaching her and so I got “credit” for some of that lesson. At the end of that ride Tig was following along as meekly as a lamb giving me and Farley “baby face”. That ponying ride in the first month was a turning point for me and Tig and our relationship.

Having 2 horses has been a lot of work.  Especially with the pressure of it being someone else’s horse and needing to ride and get results in a very short amount of time. However, today I was cantering around with the arena with Tig in tow (actually, Tig was cantering and I was taking pity on her and holding Farley down to a dull roar at a medium trot) it reinforced the decision I’ve made to get another young horse NOW, before Farley is retired. Farley is still sound and fit enough to match a younger horse – but isn’t silly or unpredictable. She’s actually helping me shape her potential replacement (and even with all her faults, having another Farley in my life wouldn’t be the worst thing in the world).

I’ve always felt like I’ve had more time and energy than what I should devote to one horse.  One horse means I’m likely overriding and over-conditioning. Although vet school and getting a dog has done a good job of moderating that, I still have a tendency to want to ride far more than what is good for one horse.

However, adding Farley as a second horse when I owned Minx taught me that having multiple horses wasn’t necessarily logical math:  Two horses wasn’t double the work, it was TRIPLE the work.

I had 2 horses in their prime (7-9 years old) that were in their first or second season as 50 mile endurance horses, as well as being in my first 1000 miles in the sport which I’ve been told is the sharpest learning curve in the sport.

By the time Minx died about 14 months after getting Farley, my life was truly out of whack. I wasn’t running any more. I wasn’t taking care of basic things in my life like buying food or cooking.  I rarely visited friends and family or went out and did non-horsey things. My horses and getting them ready to do endurance rides had become a job.Losing Minx, as tragic as it was, allowed me to push a reset button. And I am eternally grateful for that.

I resisted the idea of getting a second horse because of my lessons learned with the Farley+Minx combo. However, what Tig proved to me was that having an older and a younger horse isn’t at all like having 2 horses in their “prime”.

I’m learning that there are different “kinds” of 2 horse combos and different combos will produce different math:

If you would like to calculate your own justification, here’s the breakdown of the variables:

Below: Farley looking GOOD after Derby. 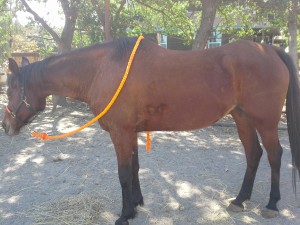 This post is significantly longer than I thought it would be, so I’ll save the next set of thoughts on some girth issues I had with Farley at Derby for the next post.

8 Responses to The lesson of 2 horses