If I had to hazard a guess, most of my readers either have a horse endurance background, or no background in endurance and somehow ended up here and stayed for the promise of a good story, even if they think all us endurance people are batsh*t crazy.

Here’s Mel’s guide to the other “less important” differences (and similarities).

Tevis: The weekend of a full moon in either late July or early August

Tevis: Rider must have completed 300 miles in rides 50 miles in length or longer that were sanctioned by the country’s national organization, in this country most commonly the AERC. (there are other ways to qualify such as completing Tevis before, presumably prior to the mileage requirement, so have less than 300 miles…but this doesn’t apply to the majority of riders.

Bottom line: Every year I’ve wanted to get in I have. There’s a cap of 210 riders for the event. I typically register after my last prep ride in May or June.

WS100: To enter the lottery to get in, you must have completed a qualifying race (there is a list of accepted races) during the qualifying period. The lottery is held in December prior to the June race. Typically you have from January-November to qualify for next year’s WS100.

Well. Let’s start by looking at the Lottery statistics for the 2016 race.

Wait, there’s more. If you name isn’t drawn, you have to re-qualify EVERY SINGLE YEAR you want to get into the lottery for a chance to run WS100.

OK. What if you say phooey on the lottery? You gain entry other ways, like winning major races, getting a sponsorship spot, having an aid station thank you for years of service by giving you a spot etc. Not applicable to most of us.

Show me the money

Tevis: $400 entry. Various stable fees. $160 if you want to prepay for your buckle (non-refundable if you don’t finish). I can’t find the post ride fee for the buckle but as I recall it was about double the cost (which is what I did the year I finished).

Tevis: You have 24 hours to finish. Except…there’s 2 1-hour holds on the course that are mandatory that count against your ride time. So you really have 22 hours. And then there’s a bunch of gate and gos where you have to pulse down but no holds so (if you are efficient), it’s probably more like 21- 21 1/2 hours.

WS: You have 30 hours to finish and earn a buckle. If you finish under 24 hours you get a special silver buckle. There’s aid stations and some spots where you have to do mandatory “stuff” (like weigh in) but there’s no mandatory holds. You decide where you rest and take a break and for how long.

Tevis: In any given year about 50% of the competitors will finish.

WS100: I don’t have an exact number but looking at this table give me the impression it’s probably in the upper 60s to low 70’s. Some years close to 80% of the participants cross the line prior to the 30 hour cut off.

But what about the trail? 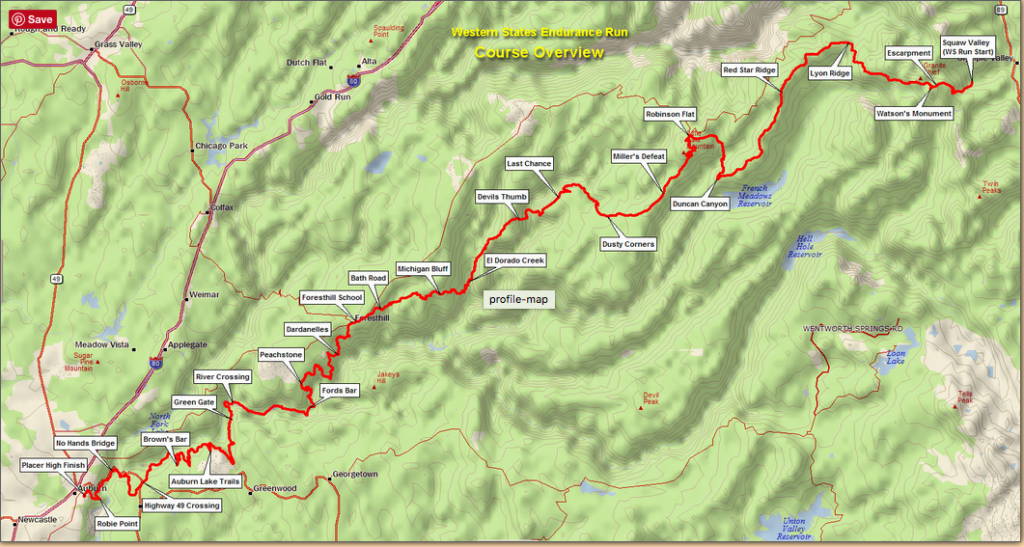 Let me just say that the WS100 run website has some AWESOME maps of the course. Unlike the Tevis site.

In addition to the start/finish differences, I’ve been told there’s some other small differences too, but in general it’s the same course.

WS100: Yes, starting at a certain point in the race.

WS100: No specific restrictions on age that I could find. Youngest female finisher was 22. Don’t know about male. I suspect that as long as you enter and qualify and get in through the lottery….then you are in!

5 years ago: Celebrate Something