Nailed It, Failed It: Loco Edition

Three things I nailed, three things I failed. Every race, every time. (BTW if I could only give you one piece of advice, I’d tell you to do the same thing.) 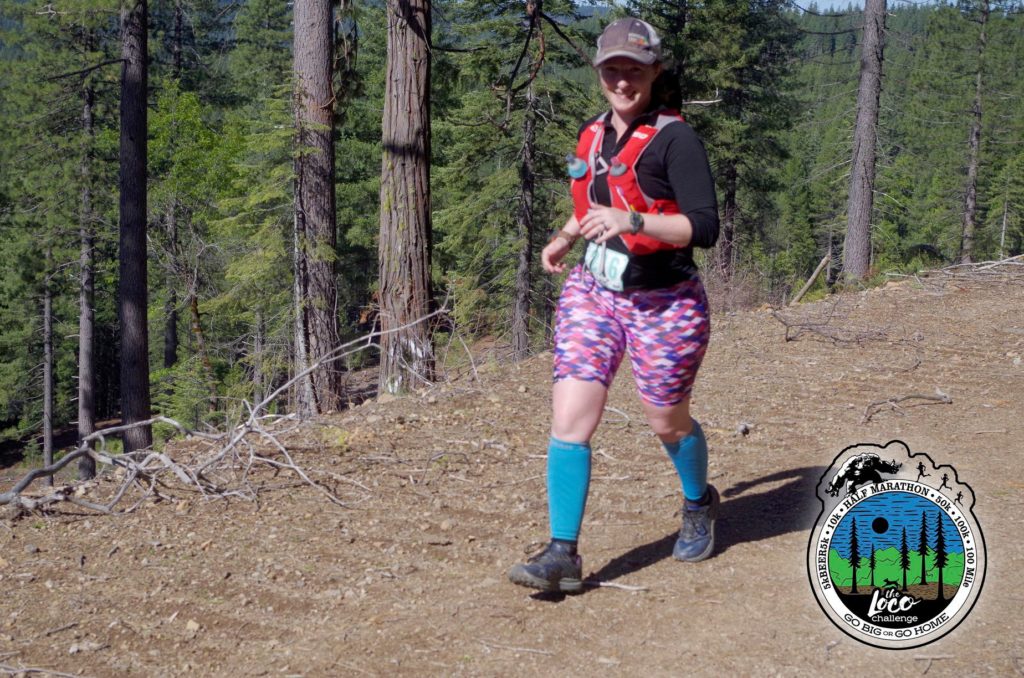 Am I hiking or running here? If I’m running we have a problem because I’m heel striking, something I thought I got rid of years ago. Time to do more barefoot training and get my husband to video me. I’m going to pretend I definitely am hiking here…..

I carried a jacket after dark

FINALLY. I was sure I didn’t need a jacket leaving out of the aid station into the dusk. Just like I was sure I didn’t need it at Tahoe (at Rio I didn’t have time to grab it because I was so close to cut offs, but who knows if I would have actually taken it?). BUT, I’ve finally gotten it through my thick head that you don’t carry emergency gear because you think you will need it. You carry it because when things go down the toilet, it keeps them from getting even worse.

Was I running really well at that point? Yes. Did I intend to only be out there another 4 hours? Was it a warm evening? Should I really go to the trouble of tying the thing around my waist? Yes, yes and YES!

This is the first race that I got to try out my new race strategy of running up some hills, starting in the very beginning (Quicksilver’s hills were too steep to do anything except try to survive every step).

It made a huge difference overall.

On the rolling sections I only gained a minute or so per mile. Not much to write home about. My times on the downhill sections remain about the same. The real gain comes on moderate uphill sections. For example, on a 2 mile mostly uphill pavement section at Loco I made up 5 minutes compared to last years pure hiking effort. Five minutes over 2 miles for the same perceived effort and it’s spreading the work over my quads, hamstrings, and glutes more evenly so I’m actually running better at the end of the race (which typically I’m running uphill better than downhill because my quads are more tired at that point, which was the inspiration for the new strategy).

On longer climbing sections the time gains were even more impressive. At the end of the race while climbing up to Colby Mountain (which includes one mile of trail too steep to run) I did the 8 mile section 13 minutes faster than last year.

The tricky thing about this strategy is that it isn’t black and white. I have to keep an eye on perceived effort and decide whether a hill is “too steep to run”, or when I need walk breaks. I have the advantage of having run distance for a long time and I don’t usually get carried away with thinking I’m superwomen at the beginning of races. Bottom line: Know thyself and don’t be afraid to try a new race strategy.

With the addition of the Topo Ultraventure shoes, I’m really happy with my gear set up. I was sure they wouldn’t work the first 10 mile test run, was pleasantly surprised after 41 miles at Quicksilver, and now after 62 miles……I THINK I’VE FOUND MY NEW ULTRA SHOES. With all the creek crossings, lava rocks, roads, technical trails this race is a really good test for a new pair of shoes. These had about 100 miles on them going into last Saturday’s race and came out of it with only minor damage and they could definitely do another couple of ultra races. In contrast, the Hoka’s got shredded here last year and I had to get another pair before my next race a month later.

My Smartwool running shirt continues to be my favorite shirt for events that I can get away with long sleeves, my calf sleeves are somehow still holding together despite years of dirt and grime, and my run vest survived being accidentally put through the dryer last week. I’m still super happy with my Z-poles I got for Xmas a couple of years ago and even though I can’t strap them to the outside of my pack like I was inspired to do after Tahoe last year, I seem to have finally found a way to have them lay comfortably across my back in the rear pocket of my vest.

I know better. I know that 2 caps an hour is a good maintenance dose for me. During a really hot race where I’m working hard, I might even go up to 2 caps every 30 minutes. WTF was I thinking? I took FOUR in 17 1/2 hours.

In the last 2 or 3 races I’ve gotten out of the habit of taking the elytes as regularly. I’ve started drinking some elytes solutions, so backed off accordingly on the number of caps, but realistically my consumption of elyte drinks hasn’t been that significant – which I know. I also tend to crave real food options at races, so those food tend to be lower in salt overall.

I hate puking. I could really do without puking after a race ever again.

I was on antibiotics (Amoxicillin) at the time of the run. I had trepidations of what toll it would extract since GI health is so important to ultra running, but over all I was OK. Early in the race I downed a chocolate milk–usually no big deal– and almost immediately my upper GI revolted. I spent a couple of minutes stooped over, wondering whether this was going to be the race where I finally earned my badges of a “real” ultra runner: puke and black toenails.

I was fine after a couple of minutes, but I didn’t try milk again during the race. I don’t drink milk on a daily basis (although I don’t avoid dairy otherwise), and I think my GI flora just wasn’t up to it on race day. We will see if it still works in the future.

The ankle I sprained on my Flagstaff vacation in mid-April still isn’t healed. It doesn’t help that I keep slightly re-injuring it on every subsequent adventure since. *sigh* It’s a weird, low sprain in my foot rather than in the true ankle. It doesn’t bother me until I step wrong and everything goes sideways. It happened once at Loco, at about the 50k mark, while running downhill. It was very angry for a couple of minutes, but then simmered down. Which makes it hard to take seriously. It also doesn’t feel great in the saddle. I don’t have any more races or other events scheduled right now, so hoping benign neglect does the trick?

Adding to the train wreck, I had a cough from some sort of plague that the dear husband/daughter unit had bestowed upon me the week before. Running definitely exacerbated the cough, and I’m still not sure how I was able to run 62 miles with compromised GI, ankle, and respiratory system? I did pay for the respiratory system after the race.  For the last 15 years after hard all day efforts at altitude of a couple thousand feet or more, I get really wheezy. I have mild exercise-induced asthma and this feels similar, but it happens when I lay down to sleep after a race or endurance ride. I have to sit up every couple of minutes to cough the fluid out of my lungs and hack and wheeze for a couple of hours post race. using my inhaler really helps–assuming I can find one that is in good working condition. I suspected that this race was going to be particularly bad because I also had that cough, and yep, it sucked.

For my next ultra, it would be nice if I was sound of wind and body.  Just sayin’.

Yes, the aid station told me to go the wrong way. No, it isn’t their fault. Wanna know why? I didn’t go off course because I got lost at a confusing intersection, or blew past a trail marking. This was an aid station that was clearly NOT a turn around for my distance in any way, shape, or form, that for some reason I turned around at, instead of going straight. Because some kid there told me too. All I had to do was glance at my map or directions, or remember that there was no out-and-back on my course.

My own dumbass fault that I lost 25 minutes. I am very grateful to the guy in jeans that ran down a hill to catch me and tell me to turn around before I took that road all the way to the start. I would have been very sad to see the start/finish only 15 miles into my run!

It’s been a long time since I’ve gotten lost at an event. No, I do not need bonus miles. Ever.

I still need a Western States Qualifier for this year, and based on my calendar I suspect it will be Rio. Again. *sigh*. I hate waiting until the last minute (that’s the last race to qualify at for the year) but I don’t see any other races on the qualifier schedule that I think I can finish at, that also don’t have a waiting list of at least 70 people. :(.

I want to do 1-2 more 50-62 miles between now and November that are like Red Dragon and Loco–budget friendly, local, laid back. I’m not sure what’s out there but I’ll find something.

ML is coming along very well, but I’m not sure I’m ready to get her to an endurance ride this fall…I like taking my time with her. Honestly, I enjoy vetting rides so much more than riding them right now.

I have a LOT of camping trips planned this summer, multiple articles lined up with editors now through September, and a couple of other personal writing projects in progress.

Rather than a list of events and goals, I’m taking each week and day as it comes, trying to stay focused on the things that are important to me, and let the rest go. I’m doing a better job of staying in the present right now, which was reflected in last weekend’s race. I left my phone, ipod, and ear buds behind in camp (on purpose) and every single step of the 62 miles was spent in my own head, in the present and focused. There’s something transforming about that, and it’s worth remembering that when I’m off the trail too. Whatever I do in the second half of this year, I’ll come back and share the adventure.

5 Responses to Nailed It, Failed It: Loco Edition