My favorite sweater and knowing can wear it all day.

Starting a book and knowing it’s going to be six hours until I unbury my nose and it’s ok because it’s just me, a snuggly blanket, and zero other commitments for the day.

Watching the rain run down the glass window with a cup of tea in my hand.

My truck and trailer hitched up, with a horse in the back, and starting down the highway for the first leg of some adventure.

I call these the quiet joys.  They aren’t an accomplishment. There’s no shoulds, no guilt, no justifying the happiness or pushing down the worry.  The joy isn’t complicated by adrenaline or tempered by the thought of the hard work that is needed to get there.

As a goal-oriented anxious person that is often uncomfortable in my own skin and head, when these moments hit me it’s the best feeling in the world.

As long as I pay attention and notice them.

The tiniest of small smiles sneaks to the corner of my lips and I take a big breath. Sometimes it’s the biggest one I’ve taken all day (week? month?). The kind of breath that actually fills my chest and…. the confused squirrel in my brain pauses for just a minute.

…And then the moment is gone.

It would be easy to overlook these moments. Discard them  in favor of the bigger wins that I have earned.

I’m going to tell you a secret.

Don’t let them float by without acknowledgment.

Make them last just one or two more breaths. When the feeling of contentment…of the rightness of the world….passes, take one more deep breath. And then carry on.

I believe paying attention to these moments is the secret to happiness.

Actually listening to my brain and recognizing when it is happy or struggling still feels weird. For most my of my life I’ve been shouting at my brain how it should feel and function, drowning out anything that didn’t fit with my plans of who and how I wanted to be. 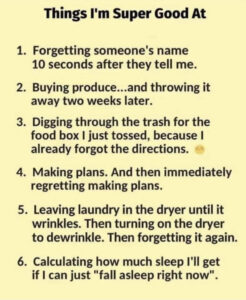 Ironically finding out (and listening) to what makes me happy started on the other side of the spectrum.

For years I had no idea that I was having panic attacks. I mean, doesn’t everyone feel like vomiting and lose their ability to read actual words when they miss their train stop and have to figure out how to go back one stop where their car is parked?

Ten years ago I was probably having 3-5 major panic attacks a week and not even realizing it.

Figuring out how to manage a panic attack and then having the tools to deal with or prevent them depended on one thing.

Being able to recognize the brief feeling of the special wrongness my brain whispered right before it completely derailed. Stop. Breathe. Feel. And ultimately….listen.

It took a lot of work but I’m down to a couple panic attacks a year.

Just like ignoring the panic attacks, bulldozing over the feeling of the simple joys is another version of ignoring what makes my brain tick. Being oblivious to the whispers of joy doesn’t have the immediate consequence of ignoring the warning signs of a panic attack. But, without lingering on them briefly, the squirrel in my brain never pauses in its race to do. It just frantically runs on and on and on and on and on……Until I forget why I’m doing and accomplishing and spending time on these activities that used to be fun. Only at that point does the squirrel sputter to a stop, completely confused and I realize I can’t quite recall when the fun disappeared.

To be honest, I find it inconvenient that I have a brain that needs something other than goals and accomplishments to make it happy. How annoying is it that I can’t just ignore my anxiety and any self care that don’t directly progress my goals?

In the end I have this one brain to enjoy this life with. Why not partner with it? Figure out this thing called living together and embrace who I am as a whole person, not just the parts that I like or feel that are worthy.

What’s the point of all this?

Listening to the quiet joys and learning to trust the whispers of your brain may be the path through burnout.

When I thought about writing a blog post this *morning, I felt a moment of quiet joy. Writing this post didn’t feel like a task or a chore today. When I recognized the “favorite sweater” feeling and trusted it. I open the computer and for once didn’t struggle to find the words. I wanted to be here, writing.

*Ok fine, it was a week ago I started this blog post. But “this morning” is a lot simpler than “this morning” I mean “2 days ago” actually “1 week ago.”

*Insert sob of relief* ’cause it’s been a while. I want to want to write. But I’ve been drifting aimlessly for a while.

But my recent running and writing “mini”-burnouts are small potatoes compared to my  five year burnout of horses and riding.

It’s not a quiet joy because there’s quite a bit of fear and nerves…but I’m riding again. A lot. And it feels right.

It’s been such a very long time since I wanted anything to do with horses. That tight feeling in my chest when I think of horses is slowly going away and while the anxiety and fear that’s always been associated with riding is still there, those emotions are tempered by at least an equal portion of excitement and joy, just like it used to be.

The catch is…I’m not riding endurance.

Horses. In my life again. After years of significant burn out.

(I still can’t quite believe it).

Here’s what I think happened. I practiced ignoring the shouts of ego and listened to the small quiet things my brain was saying instead, learning to trust the quiet voice that it really had my best interests in mind. When it finally whispered a suggestion of something horse-related I actually noticed.

Take a polo lesson from Bonnie.

It immediately gave me the “favorite sweater” feeling. Ironic since I was also on my way to take Fig to urgent care after she broke her arm by falling off her horse on a trail ride…but I had ridden one of the new polo ponies on the same trail ride and I couldn’t shake the feeling that I could actually play that horse and have fun.

The thought was almost immediately replaced by fear and an ego that screamed “YOU WILL SUCK AT THIS. And also you are old, haven’t ridden at a canter in years, and also you will destroy your hands and wrists and be disabled and never work again.”

But last year (and also in this post) I learned to ignore the voice that told me not to do something because it was scary (not a valid reason) or I might suck at first (learning a new skill = being bad at something for a while, so also not a valid reason), and my ego couldn’t figure out a solid reason not to take a polo lesson. So I did.

And then I took another. And another.

And I loved it.

Is this what the other side of my horse burn out looks like? So far I like the view.

Working through burnout is incredibly hard and scary. If you haven’t listened to the quiet voice in your head for a while, give it a try. It might have a surprising idea that just might work.

2 Responses to The Quiet Joys