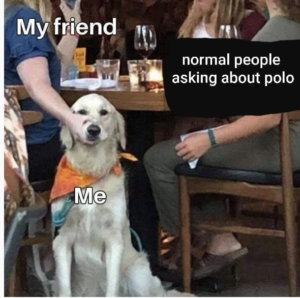 Credit: @pololessonssandiego. Look! I found someone else that also “corrects” memes. I have a whole folder on my desktop to do….someday.

On Friday I was awarded the horsemanship award at the mini club tournament. 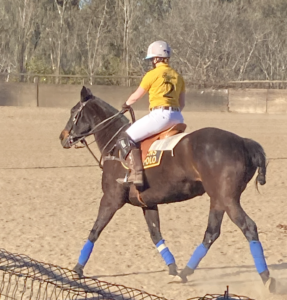 The first thing I assumed was that there was some mistake.

I had been *given* it because of *reasons* because there was no possible way I actually *earned* it.

Around 10p, at a lull at my ER shift after the game, I worked up the nerve to ask whether I actually deserved it.

I just couldn’t believe it. There’s no way *I* was recognized for horsemanship. Right?

But, it turns out I really did earn the award on Friday. It wasn’t a mistake. That award was jointly awarded by both the student and the adult coach at the game. It wasn’t awarded out of pity, or because everyone else was having a bad day. It was awarded because everyone agreed that on that night, at that particular game, I earned it. 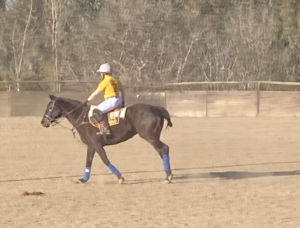 Here’s how the game went down (only two chukkers played since there were three teams and we played round robin style).

The first chukker was a perfectly reasonable intermediate chukker. Intermediate newbies against newbies of a similar level. Lots of cantering, time to think and turn and generally feel good about polo. I felt good. Hot Damn! Look at me playing polo! Making plays! Doing some defense, backing up teammates! Damn girl!

And then came the second chukker. 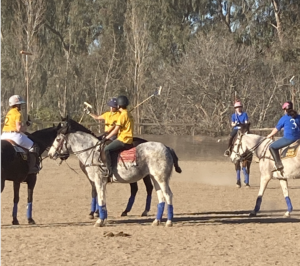 My newbie intermediate team against two of the varsity players.

The play was stepped up a notch and it was FAST. “You can handle it,” they said and then they played.

It was like this wretched scary Wednesday night advanced lessons but on a hotter horse than I had ever begged for those few times I did show up on a Wednesday  and I was. not. ready. for. this. 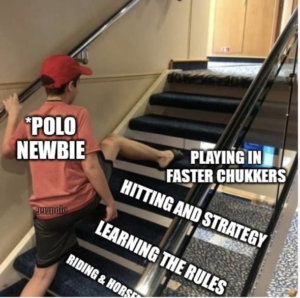 I was doing a surprisingly good job of holding it together if you count that as 1. staying on top of the horse 2. not grossly fouling anyone 3. no crying Nevermind. I definitely *screamed. Something to the effect of “I’M GOING TO DIE I CAN’T DO THIS!”

*At least if I was screaming I was breathing? 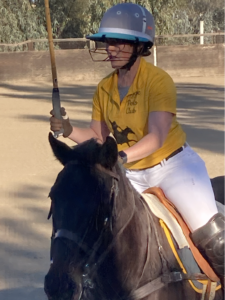 I made it through a couple of plays but then….I panicked. I freaked. My brain got stuck. My body froze.

I had been running towards the ball in front…and then…I just shut down. My horse popped – not because she was naughty but because I had my hand clutched and I just froze and tried to dive out of the play. Exit stage left. Do not pass go and collect $200.

I was toast. When this has happened before, I give up and just run behind the play for the rest of the chukker. I’m not in position to do anything so no one can ask me to do anything and I let the time run out. It’s easy to do when the chukker is only 7 minutes long. Not long enough to sort my head out. Lots of horses in front of me, that’s it, just follow the pack as we gallop and canter around.

But Friday, some how I did something different.

I trailed behind for one play…and then I galloped up to be in position and I started playing again.

I did not opt out of the rest of the chukker by keeping myself out of position. I did not quit even when it would have been easy to do so. 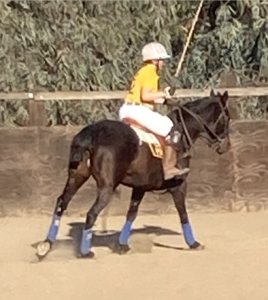 I’m so proud of myself. When I allowed myself to dwell on what happened in the second chukker – how scary it felt. How uncomfortable it was….and then how I was able to put that aside and play through it out of confidence instead of fear…..When don’t dismiss all of that and actually think about what happened,  I feel like maybe I did earn that horsemanship award and can be proud of it. :).

When I finally allowed myself to believe this I was so overwhelmed. Even right now I’m getting a little teary eyed. My hard work is paying off in an objective way. I’m getting better at something and some day I might even be good at it. It’s stupid that I need outside atta boys to validate myself, or to feel like I’m worth something, but I do. I need for someone else to tell me occasionally that I’m doing a good job and mean it.

And then I found the pictures. 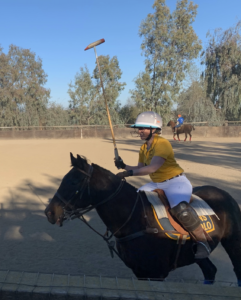 Paige was hanging out in the bleachers and had my phone so she could rock out to some music until Matt was off work and could pick her up. When I finished up my game, found my phone neatly placed next to my water bottle and stuck it in my pocket as I raced to make my overnight ER shift after finishing the game.

It wasn’t until 6am the next morning that I found the candid pictures she took of me while I was warming up Moxie.

Even more shocking to me than the horsemanship award was that I didn’t have to cherry pick the one or two decent pics out of the lot or freeze-frame videos for exactly the right moment to share them online.  I could post any of the photos proudly and (almost) without caveats.  (Don’t look at my drappy left top rein. *facepalm*)

Who was this person riding around the arena in those pictures and where was I? I *know* what I look like on a horse and that isn’t it.

Is this what being a perfectionist feels like? I’ve never thought of myself as a perfectionist but I’m starting to  suspect that maybe I am in certain parts of my life. Ironically mostly in areas of my life where it’s impossible to even obtain the illusion of perfection, like horseback riding.

I do like a challenge! Motivation and reaching for high goals and all that.

Except this particular “goal” isn’t serving me…and the most important thing to do when you realize something isn’t serving you in life? Let it go (let it GOOOOOO, can’t hold it back any mooooorrreeee…..Hey. You don’t have a six year old. Stop looking at me like that). 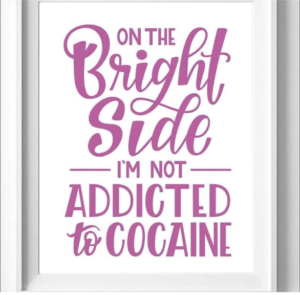 So here’s my new goal for the next term. It doesn’t have anything to do with my defensive plays or how well I hit the ball, it is simply to Believe in myself. And let go of the thoughts that aren’t serving me.

PS. Here’s what happened “the other time” I “won” something that had to do with horsemanship and one reason last week’s award was such a surprise to me.

There was that one time that I earned the high point award at a club dressage show. A little endurance arab in a sea of thoroughbreds and I won a big fancy oversized wool cooler that was clearly designed for the intended warmblood or thoroughbred winner. The overall consensus that wasn’t said to my face but implied by pretty much everyone in varying degrees, including my trainer, was that I got lucky. People and horses that would have usually be top contenders had some uncharacteristically bad days, and I had ridden “well enough.”

It confirmed what I had *known* all along. Any success I had in horses was solely due to the inadequacy of someone else, not any inherent skill on my part.

Of course it was too good to be true, that we had all shown up on a particular day to do our best, and my best was better than everyone’s best that day. Nope. My success was based merely on the fact that I had been present and everyone else had a bad day.