Over ten years had passed since I last purged and cleaned the tack room.

Ten years is a long time.

But not quite long enough to forget what happened during the last Great Purge of 2011. I will never quite forgive myself for selling my favorite endurance saddle in some misguided attempt to pare down. Oops.

This time, the Great Purge of 2021, it was merely a pair of white breeches that I probably shouldn’t have gleefully tossed while shouting “I will never have to wear white breeches again.” (spoiler alert. The Universe: haha. haha.)

Regretting a pair of breeches versus a saddle?  I’m getting better at this! 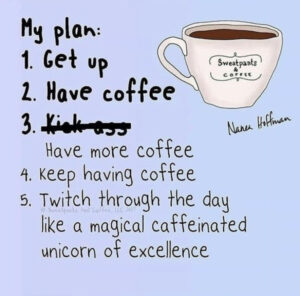 When I started vet school (aka The Great Tack Purge of 2011) I remember getting rid of the “good stuff” (the afore mentioned endurance saddle and dressage bridles etc) because I was sure I wouldn’t have time to do endurance in grad school (spoiler alert. The Universe: haha.haha.)….And making sure I got rid of junk that inevitable builds up during active horsey hobbies.

What I can picture in my mind from that purge is the mountain of stuff that I sold, gave away, and threw away.

And yet….despite only riding a couple 100’s and a handful of 50’s since then, and mostly wallowing in burnout for a decade, this summer I still found two wheelbarrow loads of stuff to give away, and another wheelbarrow load of trash.

Where does it all come from?

Most of my life I’ve been broke AF. This might lead you and I to believe that I wouldn’t accumulate much tack. I want that saddle? Find it for half the price of new. That fancy saddle pad? Better start browsing the horse tack ads. A certain bit? Where’s the tack exchanges this weekend.

But, completely counter-intuitively, being broke is likely the problem. Everything I own has been acquired through determination to never pay full price for anything. A certain amount of luck and effort goes into finding whatever my heart desires, so the idea of  getting rid of anything is terrifying because I’m afraid I won’t be able to get it back again if I need it down the road, even if it’s not quite the right thing for right now.

The other problem with a limited budget there is often compromise. The cheap used thing is 80% of what is needed….so it’s good enough right? But not really. It doesn’t quite do its job, often requiring more time, energy, and space than it should. The creative cheap home-hack works OK, but there’s usually reason that not everyone uses bicycle inner tubes as tie-around reins.

Guys. I have half a tough shed and a trailer tack room to call my own for horse crap storage. That’s it. I can’t keep stuff “just in case” or that “kinda works.”

I’m also getting used to a new reality. I’m not broke AF anymore.

Now I’m just normal person broke. The kind of broke where I’m choosing between fancy coffee in a drive through or home coffee + splurging on at the used tack shop for more non-mice chewed schooling pads.

I DON’T HAVE TO KEEP ENGLISH SCHOOLING PADS THAT WERE CHEWED BY MICE BUT-NOT-WHERE-THE-SADDLE-GOES-SO-REALLY-IT’S-OK.

I gave myself a stern talking to about sunk cost fallacy, the need purge all unused things, and a solemn promise to only buy those things that were perfect for the purpose in the future.

I opened the tack room door, took a deep breathe, and vowed to purge all unneeded things, keep all necessary and useful things, and have the wisdom to know the difference.

When I went to vet school I sold my favorite endurance saddle because I didn’t want it to get ruined in storage and I thought I could use that thousand dollars to take a piece out of the crushing ocean of my student debt. I figured I’d just start over if I did endurance again.

It was a saddle that fit me.

That fit my horse.

Turns out that was a combination that I did not quite appreciate until it was gone.

Confession. I contacted the buyer after a couple years to see if she was interested in selling the saddle back to me.

I did rebuy the “same” saddle but it just doesn’t feel the same, and I sincerely swear that I have learned my lesson.

There is a middle ground.

*That is where the wisdom lives.

*I’m a regular “tosser of things” at the house too. My husband and child regularly accuse me of throwing away their stuff. Stuff makes me feel stress! Happiness is clean closets! And charge cords that only go to the electronics currently owned! It’s much harder for me to find the balance at the stable. I guess I’m more emotionally attached to my barn stuff than 99% of the stuff in my house. I’d be sad if my house burnt down. I’d be devastated if my tack shed got destroyed.

This time as I went through the good, the bad, and the ugly, I was struck by how creative I was in my past horse-life .

Sure, budget-friendly “solutions” adds to overall chaos, and most of it belongs in the trash can now, but most of it served it purpose during the time it needed to, and I’m impressed with my past-self creativity.

But, it was tempered with sadness. That creative passion is gone from my horse life. Nowadays I’m less likely to spend that kind of effort and time when I can just buy the thing I really need.

But, then I realized something as I Konmarie’ed these items. That drive to find creative solutions within a budget isn’t gone, it has just moved to another area of my life – my career in medicine.

I find it much more fulfilling and interesting to practice medicine in lower income settings with limited resources. You gotta think outside the box and the whirring as my brain focuses on the task, evaluating and discarding options is so much fun. I’ve always waved off the gratitude of a clinic or a client for some ingenious solution with a “phah! That’s what coming from large animal will do for you!” But, looking at some of the past magic I wrought with duct tape, bailing twine, and some bicycle inner tubes, I’m starting to wonder whether this is part of who I has always been: Someone who takes what they have and creatively finds a solution to fix the problem.

I think I can be proud of that. 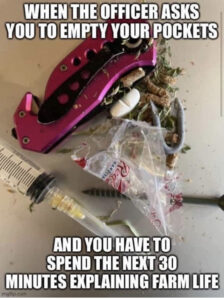 It’s good that I’m just normal broke instead of broke AF right now, because the purging gods demand their tribute as always.

Along with past creativity, chewed saddle pads, and bell boots, I also dumped all my dressage show clothes into the give away wheelbarrow.

Good Riddance! I never have to wear *white breeches again!!!!

*unflattering, expensive, unsuitable color for a horse activity. There is nothing to love about a white breech. Consider this my burning bra moment.

Guess what I need for “real” polo games.

Guess what I don’t have. 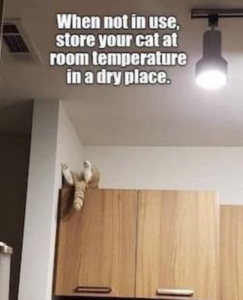