In which I check out a new riding place, meet a fellow blogger, score a pair of sunglasses, have another boot malfunction (and deduce the cause), and finish another bunny.

BTW – the first person to comment on this post gets the bunny…. 🙂 It’s not quite finished yet – it has temporary stuffing and it drying, but I promise cuteness when it is done! 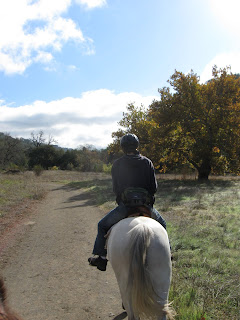 Jaime and I have been trying to get together and ride since the beginning of the year, since we first met on the horse grooming forums.

So, on Saturday, off I went to ride with someone that I had never actually talked to. I kept reassuring people that she couldn’t be a green 2-headed monster because we both had a HUGE internet trail. 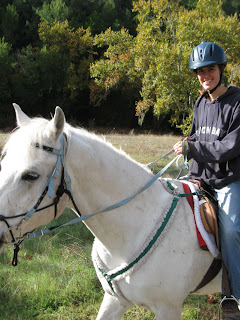 Henry Coe park is absolutely amazing. There’s a little bit of everything (except rocks). Flats, jeep roads, single tracks, single tracks on ridges with incredible views, water crossings, horse overnight camps with bathrooms. If you are an endurance rider (or a pleasure trail rider) and you are within 2 hours of the park, it is worth your while to go check it out. I will add it as a place to condition on my side bar. 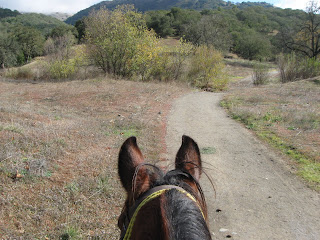 DO follow the directions to get to the park. Do NOT decide that your GPS knows best, and it will be faster to follow an “alternative” route. I navigating through the narrowest road to ever sport a center line. Beautiful and historic, but absolutely white knuckle induced driving (and I don’t say that lightly). I did manage to NOT hit a flock of turkeys in the middle of the road, but I think a squirrel sacrificed its existence. 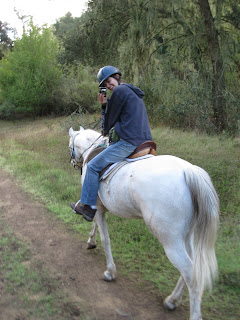 Jamie has owned “Ocean” for exactly one week. This is one, very nice horse. He does have some quirks that Jaime is doing an admirable job of retraining….such as not trotting. He prefers to canter. He may be the only arab I know that doesn’t jig – instead he canters in place with flying lead changes. Jaime has the patience of a saint and a seat to match!

I did warn Jaime that my conditioning rides NEVER go the way planned. I never do the time or mileage planned. I usually end up just doing whatever “feels” right for the day. Here were the beforehand agreed “rules”.

1. It was going to be an “easy” ride since both of us are riding Desert Gold next weekend.
2. No trotting up hills
3. Between 2-3 hours, closer to 2 hours
4. Back home before dark.

1. It was an easy ride – we did a lot of walking, we dismounted for periods of time to walk downhill, let them graze etc. The trotting we did was very slow.
2. Ummmm……technically we did not trot up hills. We galloped. Once or twice. The horses wanted to. It was fun. I have no other defense except those 2 reasons.
3. 3 hours and 11 miles
4. Absolutely! Goal accomplished.

I think we were both happy with the way the ride went.

It was SO NICE to ride with another endurance rider who is also independent and just rides. We didn’t micro manage each other’s ride to have a good ride for ourselves. It was WONDERFUL not to have to worry about the other person getting over their head and getting hurt. The only time I asked her to stop was when I had a boot malfunction on a single track along a ridge……. 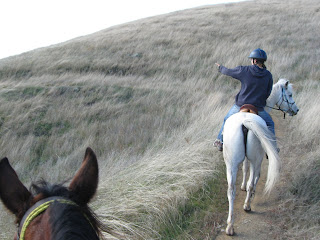 We were on a single track much like the one in the above picture. We alternated walk and slow trot (because Ocean was trubo walking). All of a sudden Farley’s LF book was off and around her pastern. She reacted by walking faster, but none of that silly bolting, spooking stuff. So I think we are over that particular reaction?

So I’m almost positive that her boot is coming off because the hind is pulling it off. Her LF is her club foot so it may not fit into the boot the same way as her RF (which has never come off). I’m going to try tightening the cables on her LF boot and see if that helps, the straps seem kind of long. The LF is also the only boot that I have cut back because the length of that foot is less.

What’s very very odd is that there seems to be no pattern of the boot coming off. It also never happens more than once per ride, which is very “deal-able.”

As long as it happens fairly infrequently, I will probably just shorten the cables and take a “wait and see” approach. I think she is still transitioning. Even though she isn’t uncomfortable barefoot, there’s still a transition going on where the shape of her foot is changing, the white line is getting tighter etc. This problem may go away on it’s own, as the transition continues and her foot changes.

This was the first ride that I felt she really moved well in the boots. I no longer feel like we are going down the trail in galoshes. 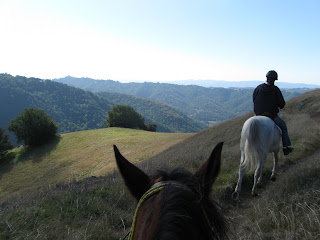 About halfway through the ride I spied a pair of sunglasses in the dirt. I shouted in glee as Jaime looked at me as if I had sprouted a second head (maybe there is something to the whole “met on the internet” thing after all). I haven’t had sunglasses in since Oroville LOVE ride when they broke on the plane. The sunglasses in the dirt were literally a God send and well worth a dismount. They had been there long enough that I didn’t feel guilty not putting them on the trail head with a note saying “found”.

I’ve also “donated” enough sunglasses to various local trails, that I feel like the trail is paying me back finally! 🙂 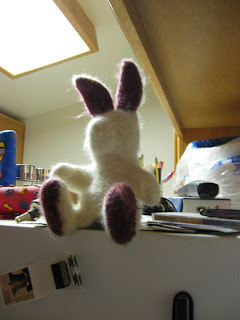 The absolute coolest thing about this weekend was meeting Jaime in person. I don’t think I’ve every met someone so much like me! 🙂 She’s the same age I was when I started endurance. We are both OCD, data-mining affectionados, independent, over-analyzers. We even got into blogging for the same reason. We both carry on full, out-loud conversations with our horses. We have a very similar horse training philosophy. There aren’t that many people my age doing endurance. They are all too busy being in school, getting married, or having kids. The fact we are both in our 20’s doing this crazy sport is very very cool. 🙂

Watch out for Jaime and Ocean – I think they are a great match and going to do great things together.

BTW – this was a much more entertaining post last night, but in order for my boyfriend to feel valued, I have agreed no e-mail or blogging the night I arrive at his house…..*sigh*. The sacrifices we make….