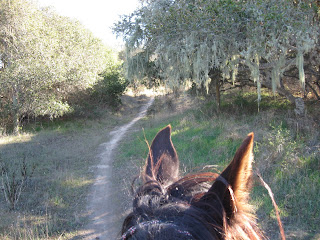 Minx is lame….again. I tell you, I will be the EXPERT on horsey lameness if this keeps up. I had an absolutely fabulous ride mid January in the BLM lands near Marina (Monterey), CA. I enjoy Farley and she’s a great little horse, but nothing compares to the content feeling in my heart when I ride Minx. It could be the fact that it doesn’t happen very often as she spends exactly 52% of her time lame due to something or other….*sigh* 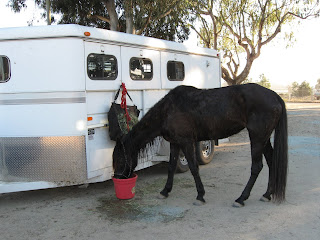 Last Tuesday I took her out after a very rainy week. A very easy, flat, with good footing, 4.5 mile ride. Maybe her frog and soles were soft because of the mud? All I know is that she felt normal at the trot on the right diagonal and WEIRD (like – “is she racking?” weird) on the left diagonal. Trotted sound after ride but doesn’t want to stand on her right hind (left diagonal while trotting….) when tied or standing still. I’m thinking stone bruise. So the ride I had planned for the 3-day weekend in February is out. I’ll see how she is for a March ride. 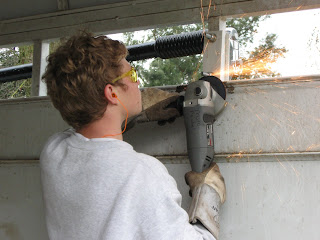 On the plus side I got the trailer tricked out for the 2009 season! Interior lights, bucket hooks, exterior lights, and various bolts ground smooth. My father also replaced 2 running lights that had shorted/corroded out. Lots of stuff was done, not because it was necessary, but because it’s those small luxuries during a ride that really matter. Here’s a pic of my brother using his grinder. He’s 16 and is starting to get power equipment for his Christmas presents. LOL

2 Responses to Minx and Trailer update