And now – let’s play catch up 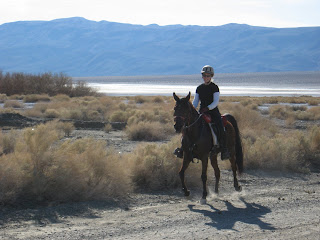 The 2009 AERC (the national endurance club for the US) season has officially began. Farley, my 1999 (that would be a birthdate….) Arabian mare did herself proud at Death Valley 4 day LD ride and we start the season with 110 LD miles. She felt great the entire time, especially considering she had completed her first real endurance race – 55 miles – one month prior at Desert Gold in Monterey. The picture left is Farley and I completed day 3 at Death Valley, headed towards camp at Ballarat. I have great hopes for Farley, including (perhaps? maybe?) the Tevis. If she continues to stay strong this year, who knows? I have a 65 miler scheduled for 2/28/09. Here’s the action plan:

1. Put weight on her. She was a BC of 5.5-6 2 months ago! what happened?! She’s now a solid 4, which means I need 50 pounds on her. I floated her teeth 2 weeks ago and have been supplementing with beetpulp (and LMF gold when I ride) since December.

2. New saddle blanket. I have purchased a skito pad for her. It’s a pricey endeavor (~150 bucks), but the Toklet woolback adds too much bulk under my leg (wide horse + wide twist saddle + bulky pad = unhappy mel…) and doesn’t dry in between days at a multi day. So far I really like it. Here’s a picture along with her new boots. 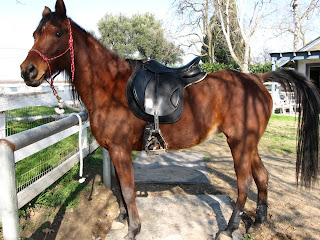 3. Interference fetlock boots for hinds. Farley demonstrated at DVE that she needs fetlock books for her hinds due to her taking large chunks when navigating miles over rough footing. I have had recommendations for Griffin boots (doesn’t hold heat in), and so far I’m very pleased.

I’ll talk about Minx in the next post…..needless to say she is lame….AGAIN

2 Responses to And now – let’s play catch up