Acid Base Balance Part 2: Sodium and Intro to Plasma Volume

Low plasma volume is called “hypovolemia”. Losing body water to sweat during exercise causes a SIGNIFICANT loss of plasma volume. Plasma volume is protected by the body, because in the presence of hypovolemia the cardiovascular (to put in a very non-vet way) crashes.

Plasma volume expansion is one way the body adapts to exercise and to heat conditioning.  Decreasing plasma volume that occurs in the older horse is cited as one reason older animals can’t thermoregulate as well as their younger counterparts.

In summary, how much fluid is in the plasma ECC body water compartment is REALLY important.

Remember how I said water follows solutes?  More precisely, in the body, water follows sodium.  So, if the body wants to add water to the ECC/plasma compartment, it needs to increase the amount of sodium in the plasma.

And it turns out, that is exactly what happens.

If plasma volume goes down, sodium increases in the plasma.

If sodium increases, the solute content of the ECC increases. Sodium cannot pass through the barrier between the ICC and the ECC, so water moves instead.  Water redistributes across the body water compartments and moves into the plasma/ECC, drawn there because of the sodium.

How does the sodium increase in the plasma?

The answer to that question in most of my “general” text books is “Aldosterone acting on the kidneys (and the gut).” 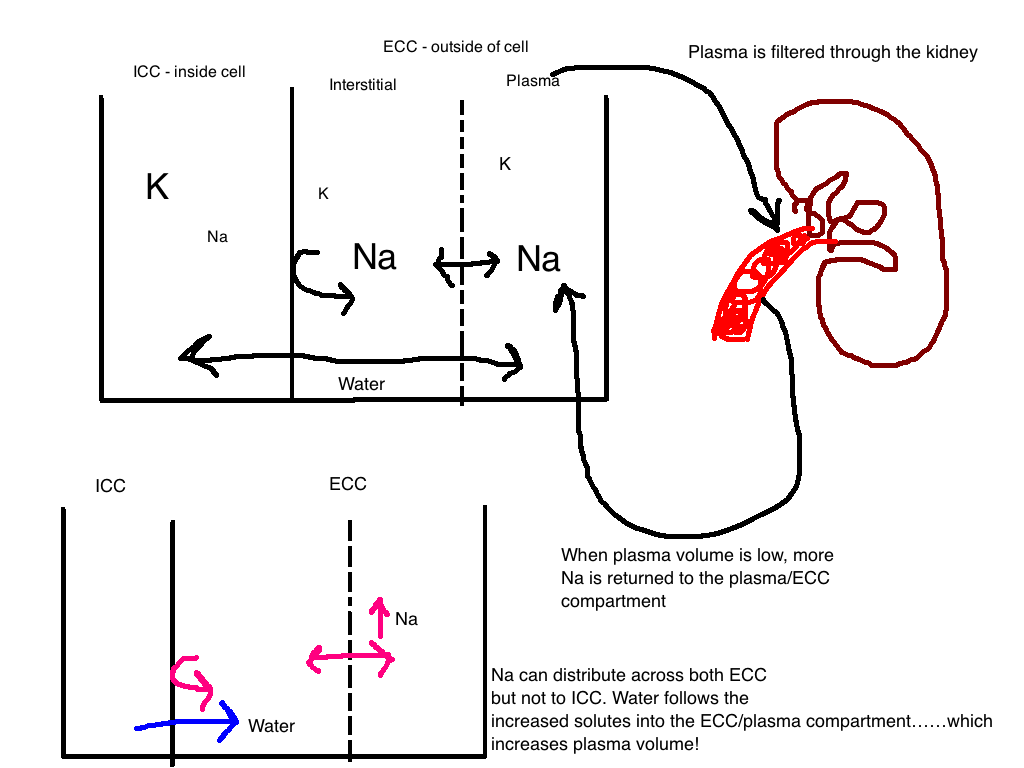 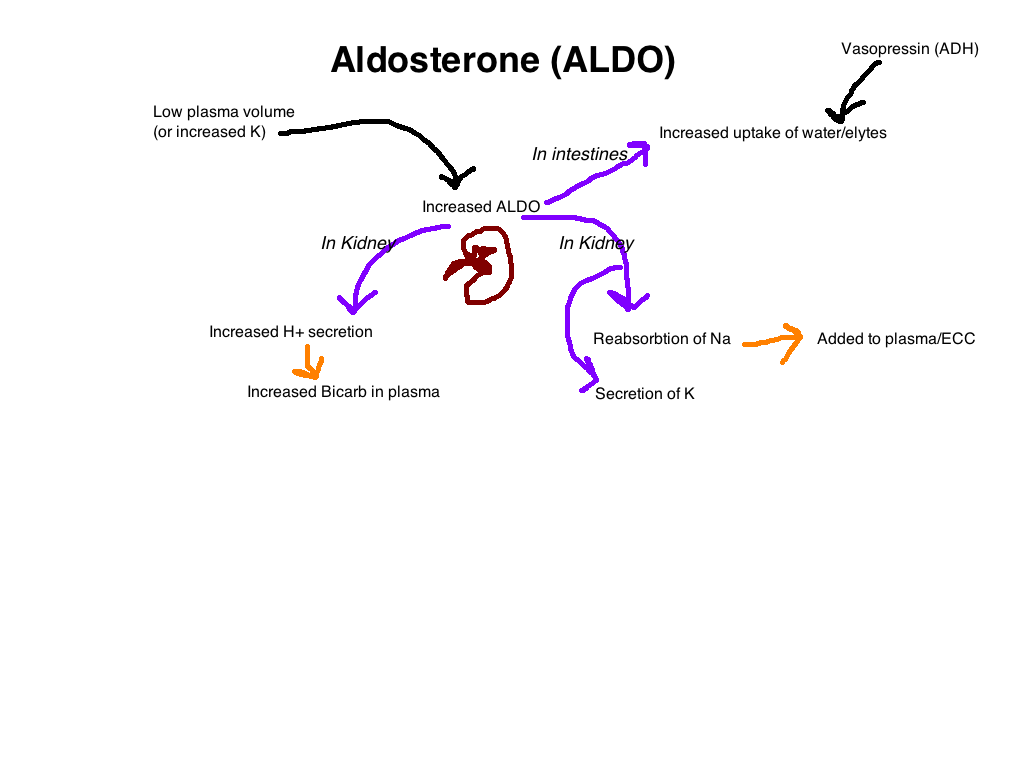 Kidneys filter plasma and depending on what the body needs at that moment, will either retain stuff (like elytes and water) or remove it.  For example, it removes or leaves more water depending on the balance between how much you drank, and how much you sweated, making your urine more or less concentrated.

Aldosterone (ALDO) is a biological molecule that is released when the body senses that there is low plasma volume (such as during exercise because of sweat losses) or high potassium in the plasma.  ALDO causes the kidney to reabsorb more sodium than usual, and secrete more potassium.  Voila!  Result: more sodium in the plasma that will attract water.

Side note: ALDO also causes the kidneys to produce more bicarb and dump it into the plasma.  As we will talk about later, Bicarb is one of the very important buffers in maintaining acid base balance.  So tuck this away in the back of your brain, and we will come back to this later.
ALDO also acts on the intestine.  Along with vasopressin (ADH), ALDO increases the uptake of water and elytes from the gut!!!!!!

Several sources observed that a horse, especially those on a high roughage diet, have an enormous fluid and elyte reserve in their gut.   In the presence of ALDO, this reserve becomes even more available.

Unfortunately, when I started looking at ALDO in the exercising horse, it turns out that ALDO is considered to have a “limited” response in “acute” exercise (ie sudden, short term), although it remains elevated in the body for HOURS post exercise – helping the body to recover in the acute phase to replenish water and elytes lost.

There are other more major factors that are moving water and adjusting solute concentrations during exercise.  However, let’s finish talking about the equine gut reserve before moving on.

This reserve in the gut was cited as a possible adaption to make up for their simple sweat glands and the amount of elytes lost in the sweat and this “gut reserve” can be utilized during exercise.

You might recall from the thermoregulation posts that there is a difference between horse and human sweat. There is a LOT more elytes in horses sweat.

As humans sweat they lose water, but since their sweat glands filter out sodium, there is less sodium per water than in plasma.  Less sodium lost means, less chloride is lost (Cl has a negative charge, and thus follows Na – which has a positive charge – in the sweat to maintain “electronuetrality”)…….Bottom line: there is a relatively low concentration of sodium and chloride in human sweat.

Equines are different.  They lose sodium in their sweat in the same concentrations as what is in plasma.  They are also losing tremendous amounts of Cl because like in humans, it’s negative charge is matching sodium’s positive charge.

How does this matter?

In the human, as they sweat and water is lost from the ECC, very little sodium leaves with the sweat.  So, even though the total amount of sodium in the ECC is relatively unchanged, the decrease in water means that the ECC is more “concentrated”.  Remember what happens where one body compartment has an increase concentration of solutes?  Water moves to the area where there are more solutes, restoring plasma volume.

In the equine, sodium and water are leaving as sweat in the same concentration as they exist in the plasma.  So, even though your plasma volume decreases and the total amount of sodium decreases…….the concentration of sodium remains relatively unchanged.  In fact, horses can lose up to 30 liters of sweat OR MORE before sodium concentrations in plasma change.  In endurance horse studies, there are minimal changes in plasma concentrations of sodium, even though the total sodium content has significantly decreased. Because of the large amount of sodium lost in sweat and the chloride that is accompanying it, horses also experience tremendous losses of plasma chloride – which decreases in both concentration AND content.

As you can see – because of these differences it can be very difficult to extrapolate from one species to another on the topic of exercise and electrolytes!

Next up: If ALDO doesn’t fully explain how a horse supports plasma volume during exercise, than what does?

3 Responses to Acid Base Balance Part 2: Sodium and Intro to Plasma Volume