Acid Base Part 3: Continuing with plasma volume and exercise

Quick update on me:
Third year is so far, much more awesome than previous years. Mostly because they split the class up into large and small animal.  Any guesses of how many large animal people there are from a class of 140?

Turns out I’m much more motivated to study and learn and prepare when I’m sitting in an itty bitty room with just a few other people and an instructor that doesn’t have to use a mike, and can write on the board instead of droning through powerpoints (powerpoints are a way for instructors to shove way more information than should be presented in 50 minutes at students – akin to having someone read every 3rd sentence out of a text book for 50 minutes (x8 a day) and is about as interesting.  Having to talk and write on the board provides a much more reasonable pace/amount of information and forces instructors to interact with their students as we ask them to decode their handwriting and whimsical drawings.

Anyways.  I’m pretty sure that was a tangent.

The second half of this year will be even more cool as out of that 25 students….there are only 4-5 food animal students.  Talk about individual attention!!!!!!  (which is nice considering the bill I’m paying for my education).

So, I’m writing bits and pieces of these blog posts as I can squeeze them in.

I had some reader questions on the last couple of posts.

I said in the previous post that when Na is lost in sweat, Cl follows it. It’s not because Na and Cl are stuck to each other like they are in a NaCl salt compound.  It’s because Na has a (+) charge and Cl has a (-) charge. All the body fluids want to remain “electroneutral” – ie the same amount of negative charges to positive charges.  When Na leaves at a high rate in the sweat, the ECC is losing a lot of (+) charge.  The loss of an equal number of (-) charges keeps the body fluid close to electroneutral.

This was sort of a side point to the main topic, which is why I skipped over it.  However, electroneutrality is an important concept :).

The other question had to do with what a blood vessel wall was actually composed of, as opposed to tendon sheaths etc.  Are the all the same thing?

Nope. All blood vessels contain a cell layer called “endothelium”. Depending on the exact type of blood vessel (artery versus vein versus arteriole versus capillary) there are more or less additional layers to the vessel such as a elastic fibers made of protein and protein.  Capillaries are the smallest blood vessels are are just made up of the endothelium.  Think of endothelium as a layer of cells, like skin, that make up a sheet, that happens to form a round tube.

Here is some excerpts from my Histo book (Bacha, William J.. Color Atlas of Veterinary Histology, 3rd Edition. Wiley-Blackwell (STMS), 01/2012. p. 77), because they explain it so well, BUT I vainly don’t want delete what *I* wrote….so including both.

“Vessels of the cardiovascular system are lined by an endothelium, which is typically a single layer of squamous cells. The smallest of the blood vessels, capillaries, are tiny endothelial tubes.

The walls of arteries and veins are arranged into concentric layers: the inner tunica intima, middle tunica media, and outer tunica adventitia. The composition and thickness of these layers vary with the size and type of vessel. The tunica media is not always present.

Small arteries can be defined, arbitrarily, as possessing up to eight or nine layers of smooth muscle cells in the tunica media. The smallest of these vessels is usually termed an arteriole. Its wall is comprised of an endothelium (tunica intima), one or two layers of circularly arranged smooth muscle cells (tunica media), and a bit of surrounding loose connective tissue (tunica adventitia). Some of the larger small arteries have an internal elastic membrane (a sheet-like membrane forming the outer surface of the tunica intima). Small arteries are accompanied by small veins. The smallest veins are called venules. These are similar to arterioles, but have relatively thin walls and lack a tunica media of smooth muscle. An internal elastic membrane is not found in small veins.

As the diameter of a vessel increases, the tunics become larger and more elaborate. For example, the tunica intima of a medium artery contains connective tissue interspersed between the endothelium and internal elastic membrane. The thick tunica media, with varying proportions of smooth muscle and elastic fibers, comprises the bulk of the wall. The connective tissue of the tunica adventitia contains collagenous and elastic fibers, small blood vessels (vasa vasorum), and nerves. A medium vein, in contrast, has less smooth muscle and fewer elastic fibers in the tunica media and possesses a thicker tunica adventitia.”

To recap, we’ ve talked about solutes and their ability to push and pull water in the various body compartments.  We’ve talked about a mechanism that the body uses to correct low volume in the plasma or vascular compartment….and then followed up with a statement that ALDO is actually not that involved DURING exercise, even though it is elevated after exercise for a couple of hours.  We know that during exercise, water leaves the ECC (of which plasma is a part of……) as sweat, which the body has to react to because “hypovolemia” (low plasma volume) makes for a very very very unhappy horse (or human for that matter).

So, let’s talk about exercise and the fluid shifts that occur.

Veins are also referred to as “capacitance vessels”.  There’s your fancy vet word of the day that I just couldn’t resist :). Basically, the vessels can hold a lot of blood volume and can return more or less of it to the heart depending on the body needs.  When the demand for lots of oxygenated blood is (low – for example when I’m standing at a library study desk typing this blog post) blood sorta pools into the veins, which expand (they are loose and flopping and can stretch to accomodate lots of blood).

When a loose, rabid dog barrels into this room and my body decides it needs to run like hell, the net result of a lot of different physiological responses is that the blood in the veins will decrease because it’s no longer pooling – it’s being pushed though the system as fast and furious as possible. No longer is it sluggishly making its way through my veins.

Bottom line, the immediate response is the redistribution of fluid from “capacitance vessles” and interstitial spaces and plasma volume increases.  This allows the increase in cardiac parameters needed for that fight/flight response – it creates an increase in “cardiac output”.

After this immediate response, MINUTES later, plasma volume DECREASES. This is because of hydrostatic pressure (the pressure of water pushing) driving water and elytes etc OUT of the vascular compartment into the intersitium.

Notice that so far all the shifts in water are occurring between the ECC “subcompartments”.

At first this seems counterintuitive……having all that fluid in the vasculature is good for performing exercise right?  That’s why there’s initially an increase….so why would there be a decrease?

Because the fluid in the ECC has more functions than just to participate in cardiac output. Remember that the interstitial compartment of the ECC is the body water that is bathing the cells, delivering nutrients and taking away waste products. This push of fluid out of the plasma into the instersitium allows the working muscle cells (and other cells) to take up the fluid.  It can either be turned into sweat for thermoregulation (extremely important), or returned to the vasculature compartment. 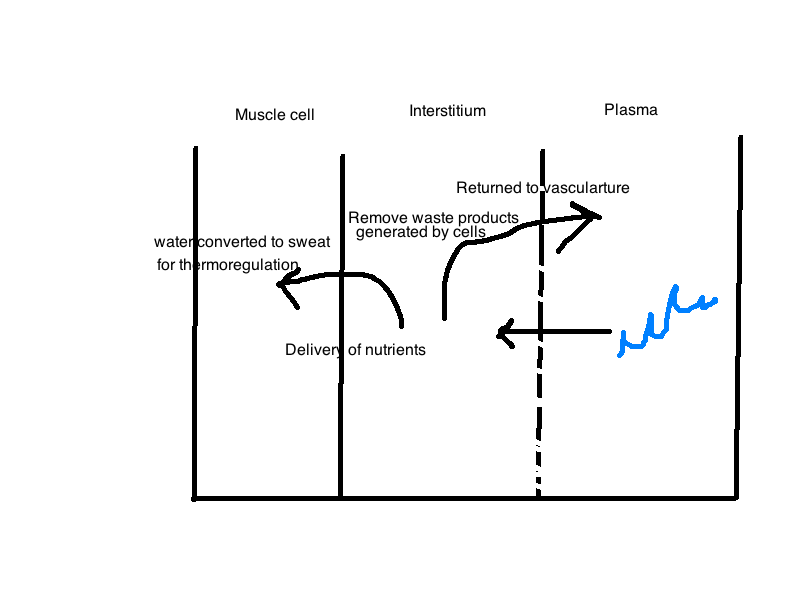 Remember that we are talking about the first couple minutes of exercise.

Going to class now, so will pick up from here next time.