Camping tips to be ignored – V

Tip: you can never have too many “ear” pictures, especially when there are bombs and serial killers around…. 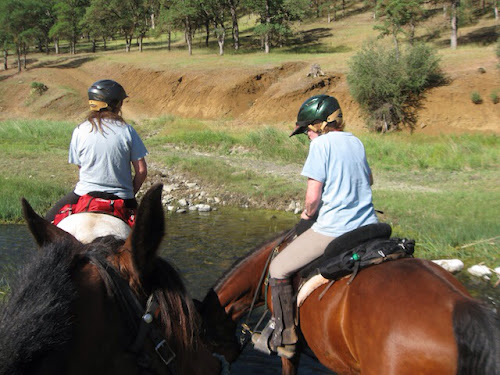 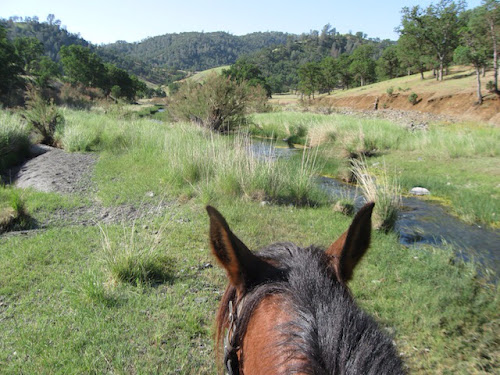 So……after arriving in Cowboy camp and tacking up to ride, we were told there was an out of control crazy horse with a saddle under it’s belly running around on the trails. AND that this horse was at some point actually caught and almost got the saddle removed…..except it jerked away fom the person, who had attached a lunge line to it….and now there was a carzy out of control horse with a saddle underneath it’s belly running around the trails, dragging a lunge line. 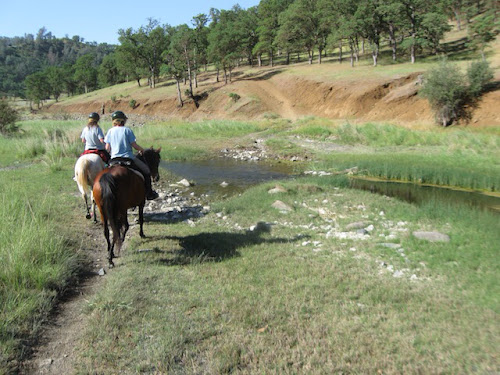 There are other little details about the situation that have more twists than the best than any country song…. but we will leave that part of the story to the imagination and focus on the little trio of riders currently pictured here. 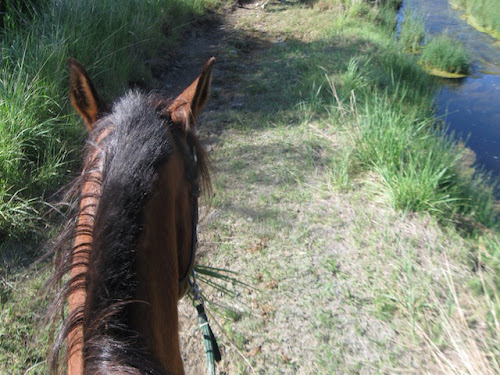 Early into our ride we end up on the side of the trail, in poke-y long grass that hid deep furrows in the ground, sandwiched between barbed wire and a trail that contained ATV’s involved in the “rescue” effort passing by.

Medusa, Kim’s horse, did a valiant impression of a Lipizzaner, bouncing around in a circle on her hind legs to express her displeasure, while Kim did her best to earn the title of rodeo queen and ride those 8 seconds. 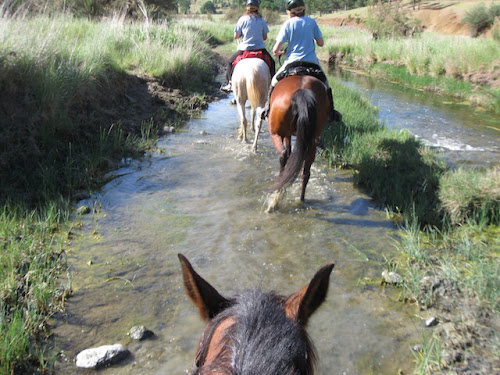 The situation finally gets under control and we start down the trail again. The horses are hyped, Medusa and Stashi (my friends’ horses) who are long time riding partners are feeding off of eachother, and I’m taking deep breathes to try to keep my anxiety about riding in a group situation with drama from bleeding over to Farley.

As we are tiptoeing down the trail expecting to see a crazed horse running towards us +/- finding the bloody wreckage of the rider around the corner, Michele makes the comment about feeling like there is a serial killer on the loose.

That was the last straw. I started hysterically pleading for a reset button for the ride, Stashi started rearing and the 3 riders were reduced to 2 as Michele elected NOT to fight a losing battle with Stashi. After assuring us that we should go on, me and Kim continue on. 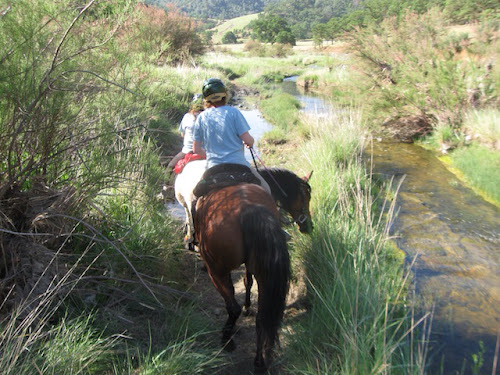 I’ve written about Stashi here on this blog before during my ride and tie experience. Stashi is an incredible horse. Who, like the girl with the curl (right in the middle of her forehead!) can be very very good, BUT when he is bad…..is very very bad!

Unlike Farley who disperses her naughtiness over time – a threatening head toss here, a little harmless, half-hearted buck there – Stashi saves it up, and when the moment of his chosing is right, releases the naughty side contained in that double whorl on his forehead.

After reassuring us that she was going to lead Stashi back to camp (1-2 miles) and would be absolutely fine doing so by herself, me and Kim continued down the trail. We tried to reassure ourselves that Michele’s style was to enjoy a glass of wine and not to plan her revenge on the 2 friends that decided to finish the trail ride instead of joining her in camp.

At the top of a big hill with a fabulous view, Kim and I decided to head back and made the trek back down the hill and rode into camp…..to find that Michele had made friends with the other campers that had a portable shade set up in the middle of the tree-less, windy, extremely sunny camp, and had decided to enjoy a glass of wine. Good job Michele!

In retrospect, Kim and I continuing on was exactly the reset button that Medusa (Kim’s horse) needed. Stashi and Medusa stopped feeding off of each other, and the crazy loose horse situation was resolved shortly afterwards. Later that day Michele and I got out in the afore mentioned evening ride which allowed Stashi to get his head screwed on right. AND because I got to go on 2 rides that day, I got more mileage and saddle time than probably either Kim or Michele wanted. The next morning the 3 of us were able to have a VERY nice enjoyable ride.

And the bomb reference? On the second day Michele was leading us through a pretty little hill trail and suddenly yells “look it’s a bomb”. And then proceeds to prance around this object. “A bomb?” I thought, “that’s a little weird that we are hanging around, letting our horses step dangrously close to the dark colored object”. Apparently she was trying to say bong. Which it was not (apparently none of us are up on our drug paraphanelia lingo) – but instead a pipe that had been (carefully?) placed on a rock on the trail.