Home » Equine Endurance » Climbing out of the Training Black Hole

Climbing out of the Training Black Hole

Me and MerryLegs have been figuring stuff out together.

MerryLegs’ current training level is a big black no-mans-land to me. I’m comfortable doing the initial ground stuff up to the first ride, and I know how to take a green-broke horse and turn them into a partner. What the heck am I suppose to do with a horse isn’t quite broke enough to RIDE, but is past the basics of “here’s a saddle, here’s a girth, and it’s not scary when I climb on you”? 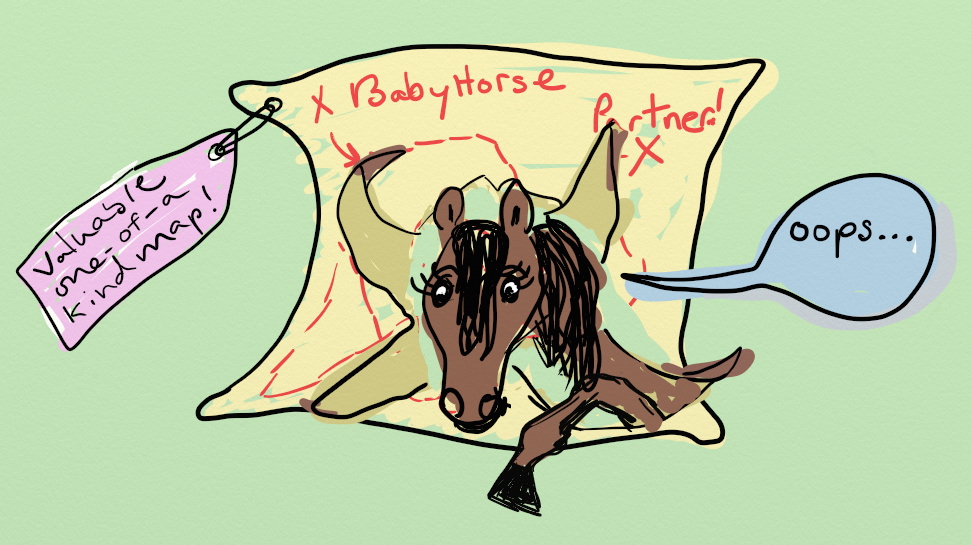 The best advice that I’ve been given so far is to ride and train my future horse now. This means when faced with a problem, try not to over-think it and just handle it like I would in any of my other horses.

So I stopped my elaborate baby horse rituals. If it’s been a while since we’ve been out, she gets turned out into the arena. If she’s been working for a couple of days in a row I’ll just pull her out and hop directly on her back.  I expect her to behave like an adult and to my surprise 99% of the time she does.

She handled being bridled and walking around the arena with halter pressure as if it had been 18 hours, not 18 MONTHS since she was last asked to do it. So this week when I saddled and girthed her up for the first time since way back when, I tied her up to the post where I normally tie Farley (I tie baby horses to the other post which is further away from the tack room but is *less scary*) and saddled her up. Discovered the girth from *last* time was a full 6 inches too short, dragged everything off her back and then redid it. Voila! She just stared at me as if to say “get on with it”.

I was prepared to go back a couple of training steps if she demonstrated that she needed it, but I’ve stopped assuming that she needs to be “babied”.

People tend to be attracted to the same type of horses over and over. Is it a surprise then that MerryLegs and is sensible, focused, and purpose driven? She also hates being drilled, is bored easily, self-sufficient and is always verifying where the line is (and whether if she puts a foot on it will it move 3 inches?). I have always owned horses that could be taken out of the pasture after a couple of months and ridden without a lot of prep work. Should I be surprised that Merrylegs is the same way?

But what about when I get to that thing that is basic but she hasn’t done and I’ve never trained before?

For example, MerryLegs knows how to take a bit on a bridle but is never had anything hooked up to the bit. Now, I could go along riding her in a halter forever I guess, but I think a horse that is never been trained to respond to a bit has a huge hole in its training and you’re limiting yourself to a very small toolbox in the future – even if you decide to ride in a halter later. A bit is about control and the nuance of communication. Two things that I would like to have before riding the  horse on the trail.

So, I tried to set aside the “baby horse” mentality and focus on the problem and if it was any other horse presented to me as rideable, but never trained with a bit for whatever reason.

Since she releases to pressure very well, has been carrying a bit for a year and a half I tried not to over-think it and just do something logical. I hooked up some light lines to the bit while holding onto the lead rope as a safety line and walked along side of her on the ground while putting pressure on the bit. The next time I jumped on her back and did the same exercise. At some point her brain would become full and we went back to the halter. But that didn’t happen very often and not for very long.

She’s not solid citizen who’s ready for the endurance trail yet, but we are one step closer and it was (once again) a step that involved zero drama.

I think the trick to getting her and I through this stage is to just do the next step and not think too far in advance. Not taking it one step at a time is when I tend to panic and think up the worst case scenarios. I get overwhelmed thinking about riding her on the trail because that’s too many steps skipped. Of course I can’t imagine it going well. We aren’t ready to do that yet. Next step is ground driving, not going for a mounted trail ride.

As me and ML do more and more rides together, I remind myself of the simple rules that should govern ALL my rides, regardless of the age and experience of the horse.

The tentative 2017 plan for ML is alternating one month with me, and one month at mare camp. She retains her lessons really well so a month off to run around a hilly pasture shouldn’t be a big deal. When she’s here I can keep my head down and focus on one step at a time. When she’s at mare camp I can look at the whole picture and make sure we are on the right path without being overwhelmed and over-thinking my day-to-day training with her.