I do a lot groundwork.  I always have – either because my horses were too crazy to ride, were recovering from an injury, or I couldn’t ride because of footing, lack of facilities, darkness etc.  In addition to riding, I also drive horses – ground work is an opportunity to tune up my body language, long line, and voice skills.

When you think ground work, are you already bored? Activities mostly at a halt or walk focusing on yielding to pressure or “sacking out”?

If you think lunging, do you think of horses going around in endless circles, or with equipment on to work on certain “positioning” of head, neck, and body?

Is ground driving you walking behind the horse holding 2 pieces of “string”?

Is round penning you in the center of the circle with the horse going round and round and doing inside and outside turns?

If this your preception of “ground work” or any of the other variations above, then I’m going to blow your mind.

Think of groundwork as something that you can adapt to any situation, any facilities, or any tools you might have on hand.  It is only limited by your imagination, and I guarantee you that my groundwork sessions are just as physical AND mental a workout as anything else I do with Farley (excluding my super long rides of course).

I’m going to share with you the ground work session I did with Farley today in an attempt to inspire everyone and convince you that groundwork is so much more than “getting the bucks out” or “joining up”.

What I did today could EASILY be done in a roundpen, or on a double line.  I happen to have a super large arena and can only find one of my long lines – thus I’m doing thus as a lunge.

First I warmed up with some moderate trotting in a circle. 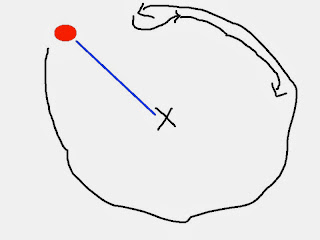 We trot 8-10 circles, then I would have her switch directions and have her trot another 8-10 circles. Sometimes she breaks into a nice little canter and I don’t worry her about it.  My goal at this point is to keep my position fairly still and central and relaxed just have her go around me at a moderate pace in a relaxed manner with a couple turns every once in a while.

Once she was warmed up, we started doing more turns.  The goal is not to ever do a complete circle. 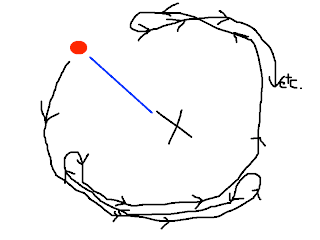 Again, I am not moving from my position much (ideally) so far. 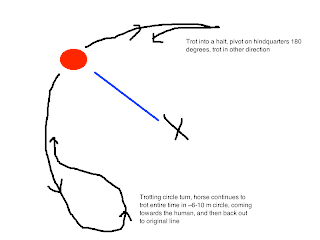 I move on from this when I can see her move more of the impulsion to her hindquarters and she’s curving her body towards me, because she’s ready to do a turn at any point, but is maintaining good forward impulsion. Now we should be travelling at a consistent, forward, rhythmic working/medium trot.

Next I move onto “spectacles” and then “figure 8’s”. The idea is to ask for turns and straights and circles and curves to mimic these 2 patterns. My goal is the patterns to be done by the horse with a smooth and even trot, without breaking stride.  With patterns, now, I have to start moving and using my body position as well as everything else to communicate the objective. 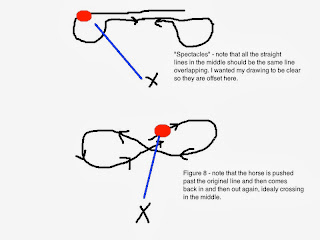 If I feel like she’s having a hard time getting the concept, or I’m getting uncoordinated in my efforts to communicate, then I slow her down to a jog or even a walk. If she’s really tried hard and finally “got” something after really trying hard at it mentally we will go back to a couple of easy complete circles, like the warm up, to clear her mind and so she can have a bit of a mental break. I really try to make exercise flow to the next one.

On noticed during the patterns that she made a much wider turn towards (into) me when doing the left side of these patterns – ie when she makes a turn that switches her direction from counterclockwise to clockwise, which is forcing bend towards the left. Some of it is my body language, some of it is her perference for a “side”.

So, I used a random object in the arena to help us not to “cheat” – a orange cone.

The cone isn’t to “force” her into a certain pattern – she could care less and ignores the cone – it’s a guide for ME of whether or not I’m communicating effectively and precisely.

Here was the goal. 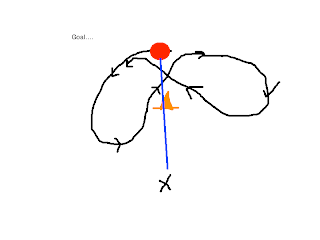 And…..here was what actually happened. Over and over. 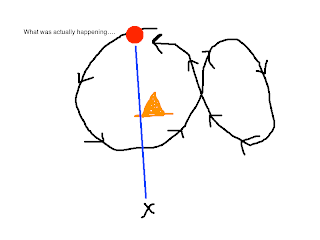 In summary, my goal with these sorts of sessions is that they are done with smoothness and calmness. As we progress through the session she should get softer and more relaxed and more supple. She should be traveling more and more with a rounded top line, pushing from the hindquarters (her natural inclination is to travel around on her forehand with her head and neck held straight in the air. *sigh*).

7 Responses to Ground work – be inspired!