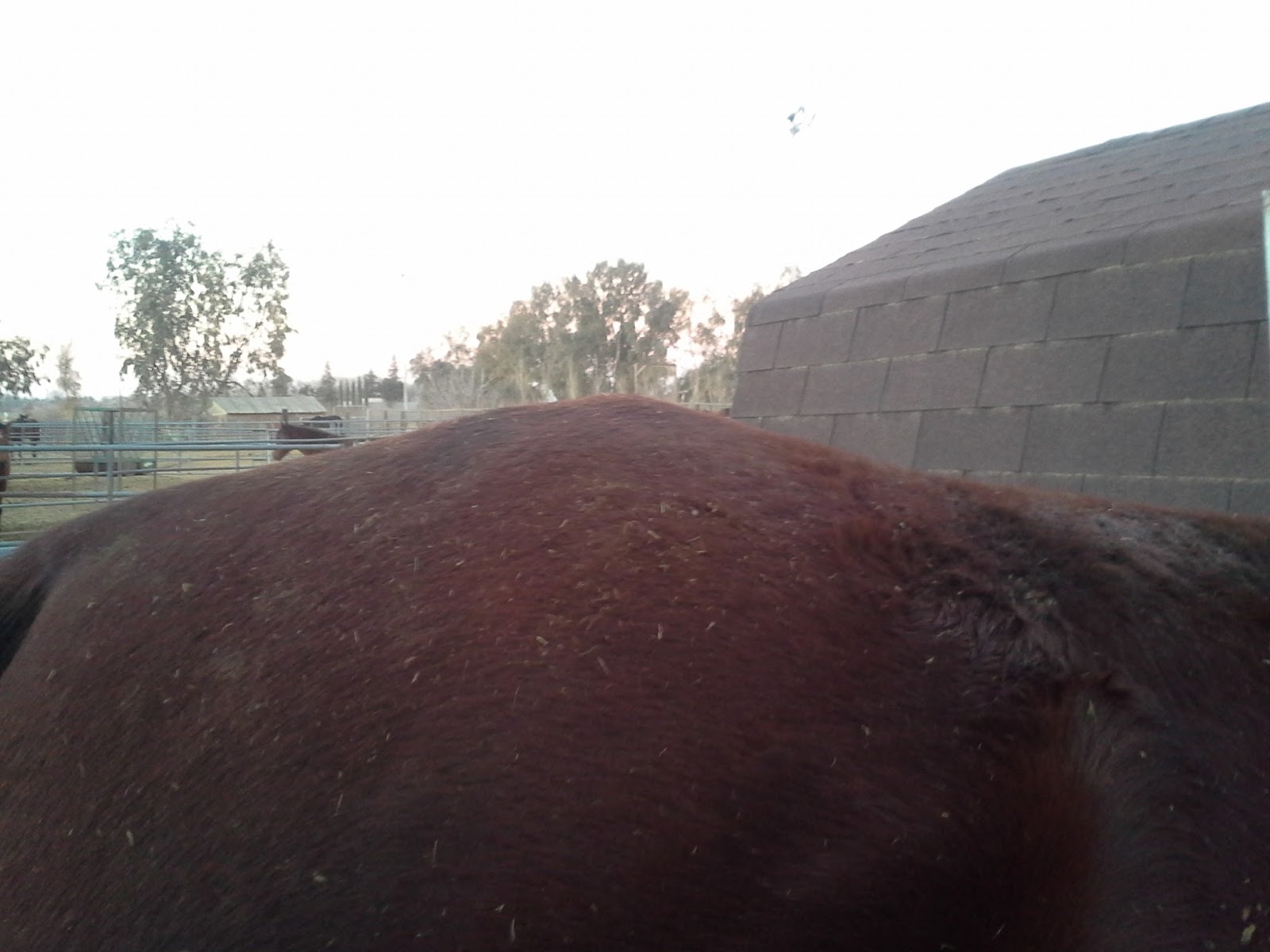 Took Farley out today for the first time since the chiro.

Wanna hear what I think so far?

Pictured above and below is the “bump” that’s on top of her butt. I couldn’t get a whole body shot of her in the fading light with my cell phone camera, but it’s definitely still reduced from where it’s been lately!!!! (both pics are from today, just slightly different angles). 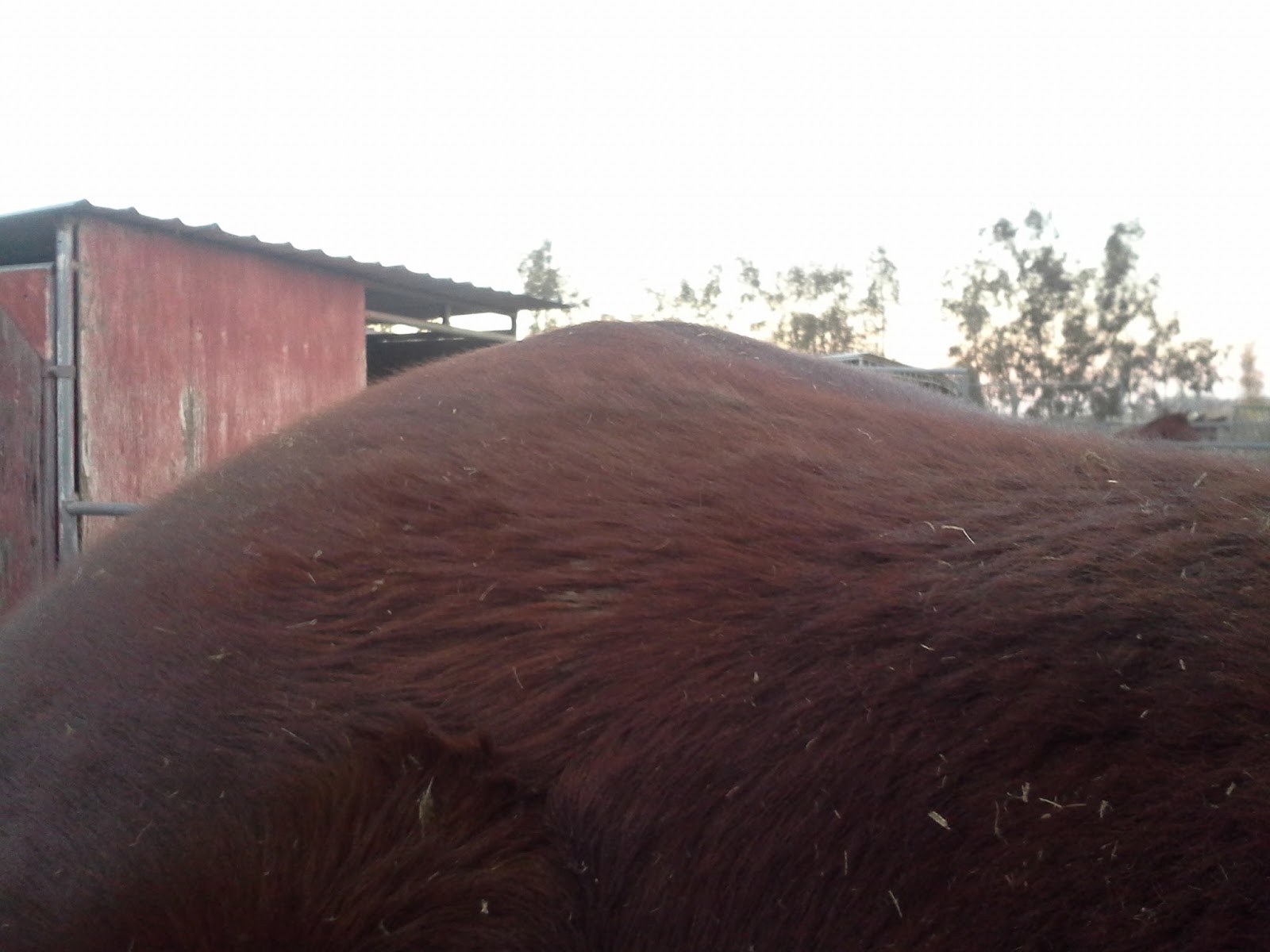 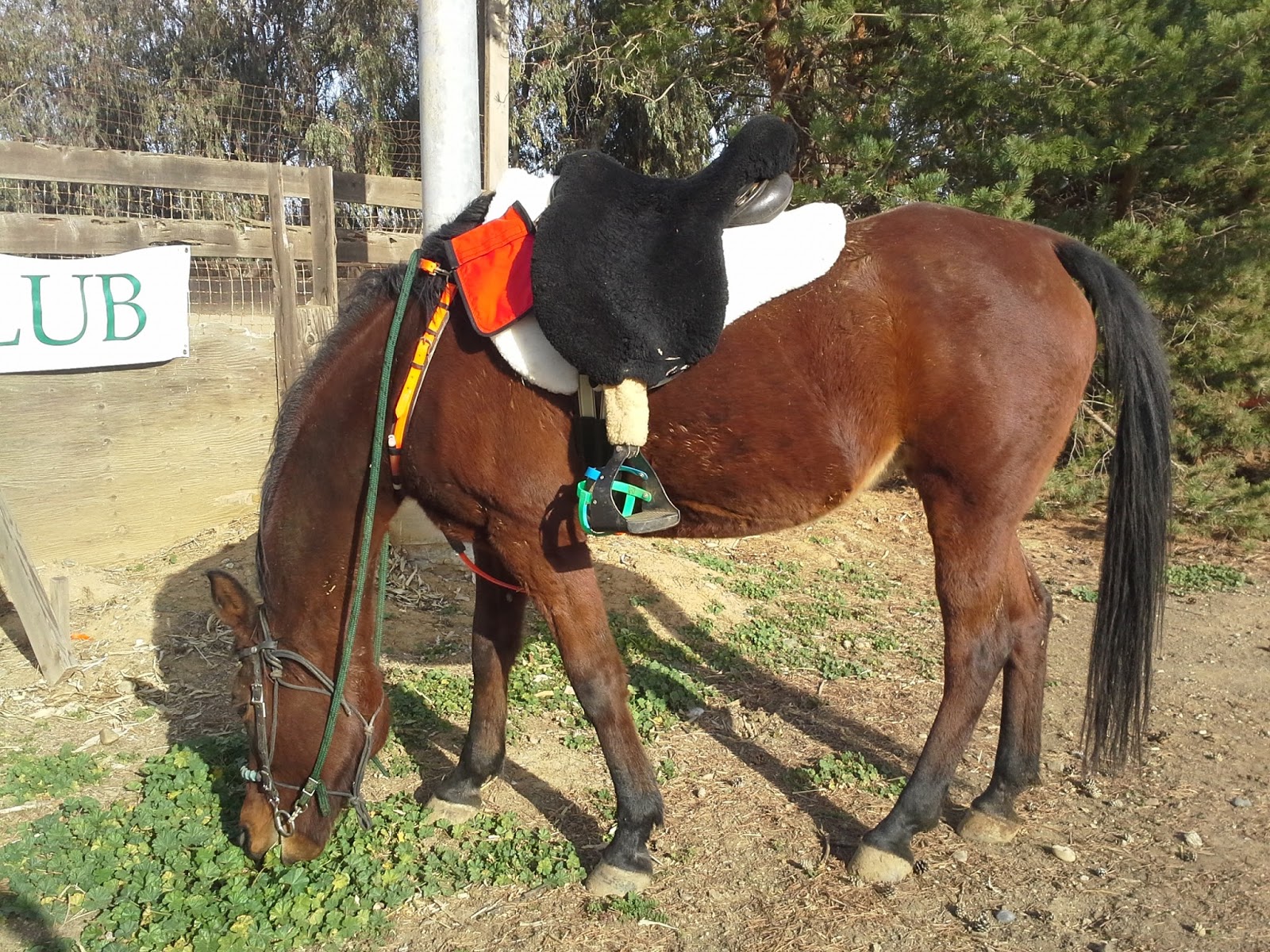 It just doesn’t show up very well, so you are just gonna have to believe me.

Moving on from the diminished bump.

For the last two weeks I’ve been having to use an additional saddle pad under my solstice. The clearance has always been closer than ideal (huge withers!) top to bottom but I started seeing/feeling the saddle sort of cocked to one side when I was mounted up – I could feel with my fingers that one side of the pommel of the saddle was closer to the wither than the other side, even though it was centered on her back?  It made me really nervous because I don’t want my saddle to touch the wither on the top OR THE SIDES, so I’ve been using a cushioned “insert” pad on my woolback to elevate the saddle off the wither area more.  This imbalance wasn’t caused by anything I could feel – the saddle was on straight, I was balanced. No amount of adjusting or squirming fixed it. It was driving me and my OCD-ness bat sh*t crazy.

Today I tried the saddle with just woolback and………THE SADDLE SAT STRAIGHT ON HER BACK. Even spacing on both sides of the withers. At rest and while moving.  HALLELUIAH!!!

She also was standing much more square and not camped under. I tried to get pictures both before and after the ride. But most of them looked like this so I gave up: 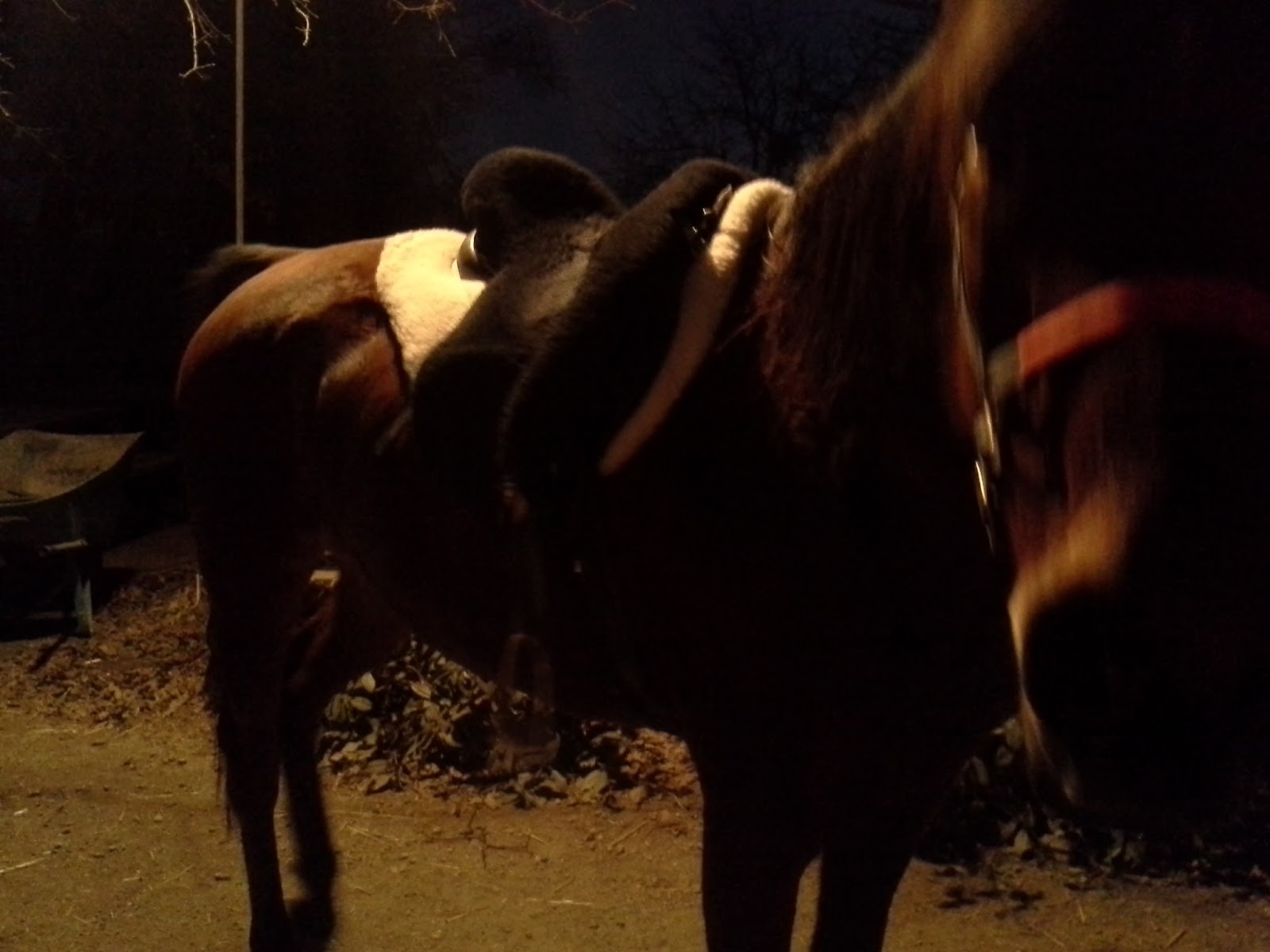 Admittedly I wasn’t trying *that* hard. Bad light, cellphone camera, and anxiety problems from poor stress/life management that I *knew* would go away if I COULD JUST GET ON AND RIDE THE PONEH!!!!!!!

She still looked around when I tightened the girth (slowly and gently like I always do. *sigh*) so I counted her as still girthy. I guess you can’t win them all.

When I picked her hind feet, she still seemed a bit stiff and tense.

So, mixed results.  Some improvement, but some no-changes as well.

Below: Burning in the evening of orchard prunings and some pulled out trees. Farley was acting 15 going on 5. 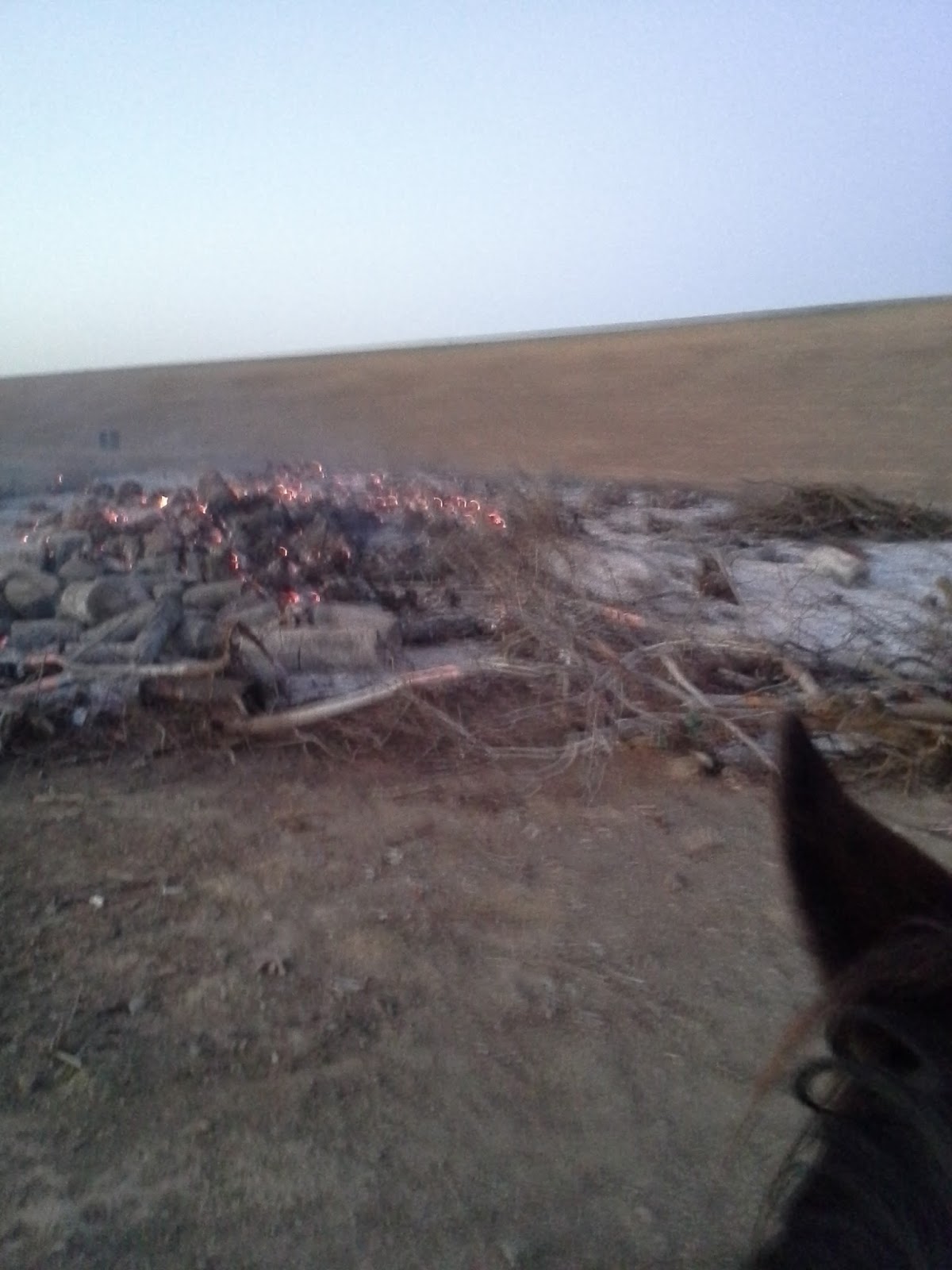 Stepped out on the trail and I noticed that she seemed to move free-er.  But I thought she might just be forward since it’s been a couple of days since she’s been out. After our normal warm up stretch we started jogging, moving onto a working trot. Shortly after that I was trying to convince her that we did NOT need to do an extended standardbred racing trot *just because*. Umm….15 years going on 5? Where’s Tig? I need to do a little relaxing trail riding.

Anyways. All I can say is WOW. The last time I felt something this dramatic in how she moved was when I got her hocks injected.  Which was in the neighborhood of $350, not $50.

Her hind end was so much more active, engaged, and through. I could feel her little motor in the back going, with the hind legs actually extending behind her in long strong strides.

She didn’t brace her neck on the side she normally braces on.  She actually traveled straight.

She still had a preference for which trot diagnol (rise and fall with the right shoulder), but today the diagnols felt so close to the same I had to actually look down to see which one I was on. When I changed diagonals on a straight away there wasn’t any adjustment in her gait or step – it was totally smooth from one diagonal to the other.

Now, you could argue that this is entirely a placebo effect. And it’s true that some days she feels more engaged than other days.  HOWEVER, I’ve put THOUSANDS of miles on this mare.  I know the range of what normal for her she feels like, and she felt DIFFERENT today.  Straighter, more active pushing hind end.  She wasn’t lame prior to the chiro appointment – I’ve actually been really happy how she’s been moving the last couple months. But, she’s always had a tendancy towards uneven-ness and a preference for a “stronger side” or lead. Her diagonals and canter leads feel different from each other.

As we flew down the trail today at a trot she felt perfectly even and smooth even at higher speeds. Normally because she has/had a stronger diagonal, it wasn’t uncommon for her to feel almost a bit gaited, or push off harder on one side as if she’s about to break into a canter – but not today.  I wasn’t having to hold her together or encourage correctness of gait *at all*.

I was told to evaluate after 4 days for the full effect – so I’ll continue to ride and evaluate. What will be very interesting is whether I notice a change back to the “old normal” in a couple of months, and whether another chiro session produces the same results (and if the findings during the chiro appointment are the same or different).

So far my verdict with this horse and this chiro (D* – same one that Aurora over at redheaded endurance uses!) is that it’s worth it.