Best as I can recall, this is the first time I’ve really posted about my saddle dilemma with Farley. It’s long, it’s whiney, it has too many details – but it will put into context some of the post that are likely to come later this week.

A recap of Farely’s saddle history is in order:

That brings us to today.  Here’s the issues I’ve noticed in the last couple of months.

My gut feeling is that the amount of mounting/dismounting I do from the ground during a ride has warped the tree or compressed the flocking or a combination of both.  I also suspect that this solstice was originally a narrow gullet that was widened to a medium which might be causing issues.  I dunno.

I need to get the saddle checked out and probably have some work done on it. Fine. I get that. I’ll get the work done.

The bigger problem is what I saw when Farley shedded out her winter coat. 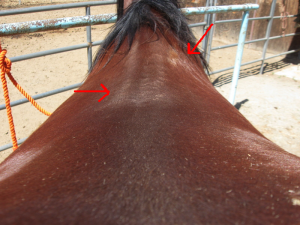 2 white spots. In a line along her spine on the left side, and a patch on the right side of her wither above her shoulder (where I’ve been seeing the “funny” patch after rides).

Undoubtedly some of the pressure is being caused by whatever issues are going on with the saddle. I don’t think it’s a coincidence that these pressure points coincide with where the most pressure is put when mounting, and with the “twisted” feeling I’m getting in the saddle.

But here’s the larger problem. The issue isn’t going to go away completely even if I get this saddle as perfect as I can. Because these are EXACTLY the same areas I had problems with in my last solstice.

My philosophy when it comes to saddles is that while it may be impossible to get a perfect fit for rider and horse, the issues need to be manageable. 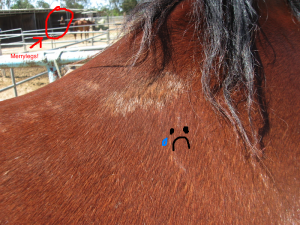 I’m not selling the solstice – it’s my go-to saddle for security and comfort and I’ll not give that up easily. I KNOW it works for 100’s, and as long as I’m not using it every day I can get away with it on Farley occasionally when needed.  I don’t know that it won’t work on Merrylegs, who will be under saddle before I know it. I’ll not make the mistake of getting rid of a saddle that is perfect for me again.

I’m especially frustrated because I feel like I’ve exhausted most of options.  The “saddle history”above  doesn’t include the multitude of other saddles that I put on Farley but never bought or rode in because they would never work.  Or the saddles I rode in and instantly hated. And yes, I’ve gone through most of the major branded specialty and non-specialty pads. (I’m great at finding good deals on used tack 🙂

How desperate am I?   Desperate enough that I’m ready to try an option that I decided a long time ago was NOT an option for Farley – Treeless. 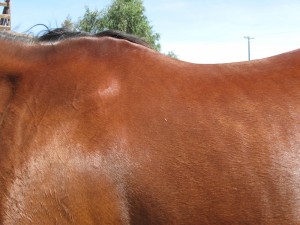 Farley has a large wither. This picture doesn’t do it justice. I’ve asked friends who do the treeless thing and they look at her back skeptically.  And I agreed.

But now, frustrated to the point of tears over trying to make treed saddles work, I’ve decided what the heck?  What do I have to lose? Maybe it will be a complete failure – maybe it will be immediately obvious that just as I suspected, it will never work. But maybe, I’ll be surprised.

When I was shopping for a solstice last summer, I had several people tell me to consider a freeform because the flap under my knee was similar to the solstice. I kept that in mind in case I ever wanted to try treeless (on a different horse).

So today, knowing I could make it to the local consignment shop both today AND tomorrow during business hours (no small feat in the middle of clinics), and remembering that they had a freeform in there the last time I was there…I drove to Auburn.  This shop lets you demo saddles and return them the next day if they don’t work.

It had sold. No other treeless in the shop.

In a last ditch effort I posted this on facebook:

Less than an hour later an endurance friend posted this:

AND she lives in the town that I was currently having lunch in.

*sob* endurance really is the best community ever.

And that is how I found myself in procession of a freeform today, and that is why Farley and I spent THIRTY minutes cantering in NINETY-FIVE degree heat in the middle of the afternoon. 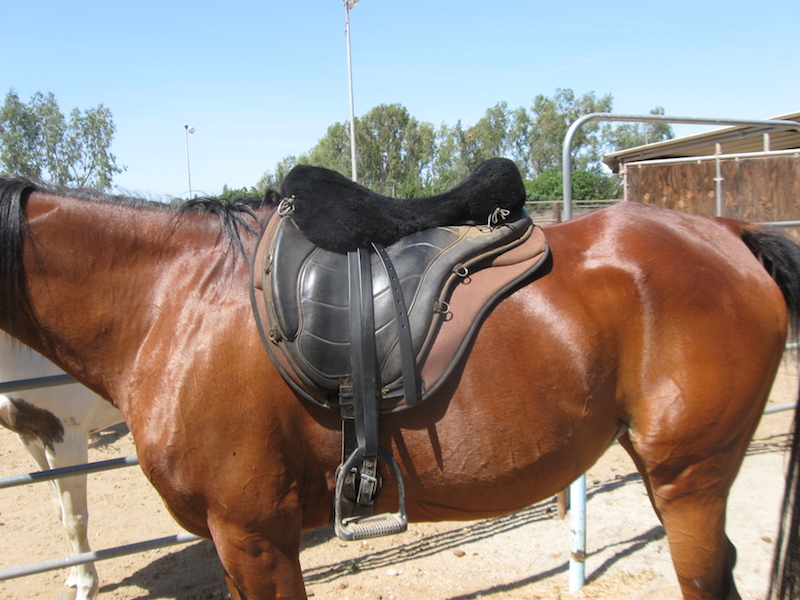 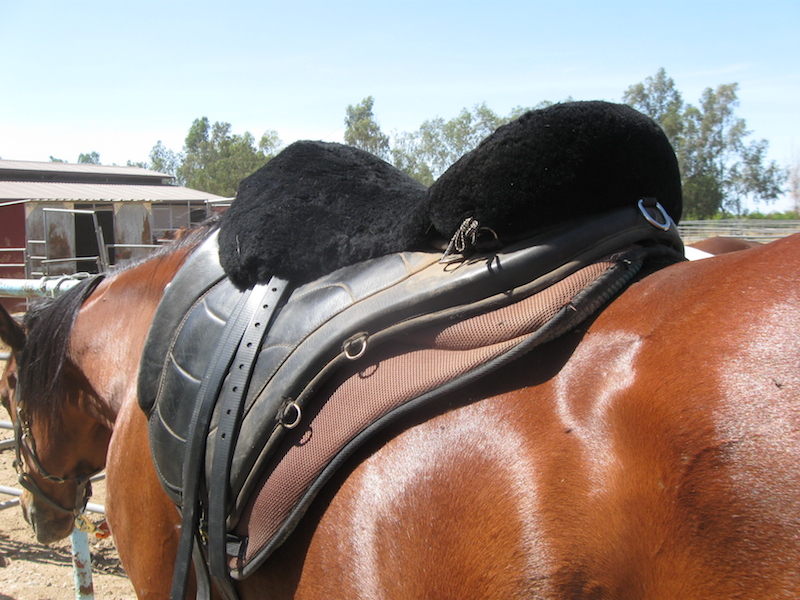 I did my planned dressage session in the arena – mostly canter because Farley said “let’s go!” and I would be a fool not to take advantage of impulsion at home when offered!

Here’s what I noticed (once I figured out that my stirrups were a hole too long and shortened them!  Ah, that’s better)

I got what I wanted to accomplish in the dressage session and don’t like to drill Farley once she “gets” something (today we practiced walk-canter transitions and canter lead changes) but I feel like she still had a lot of go left and I wanted some more saddle time so we hit the trail.

Again, here are my first impressions. 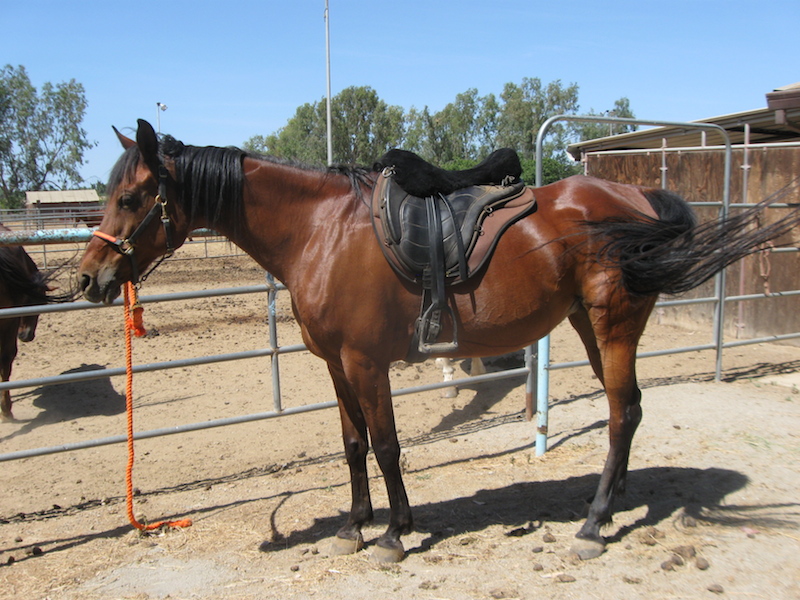 Saddle after coming off the trail work, which was done directly after the dressage session. 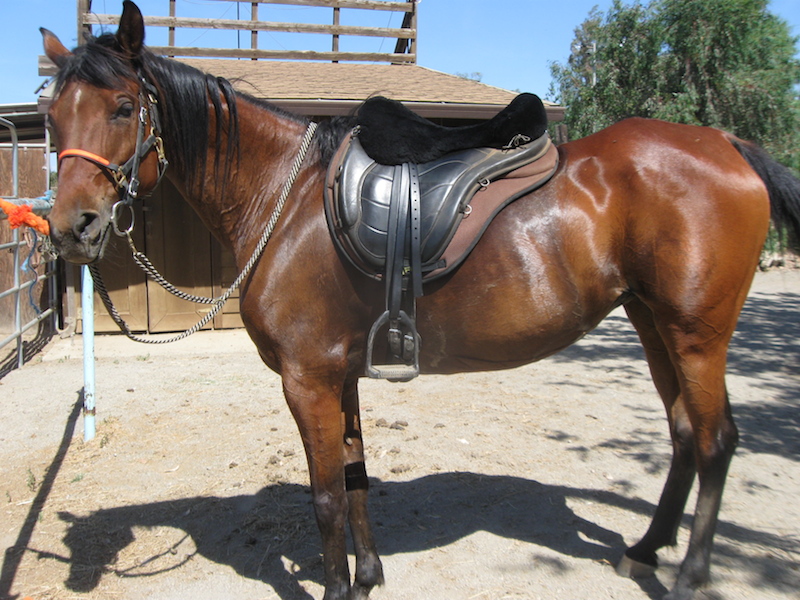 Was really pleased with the sweat pattern. 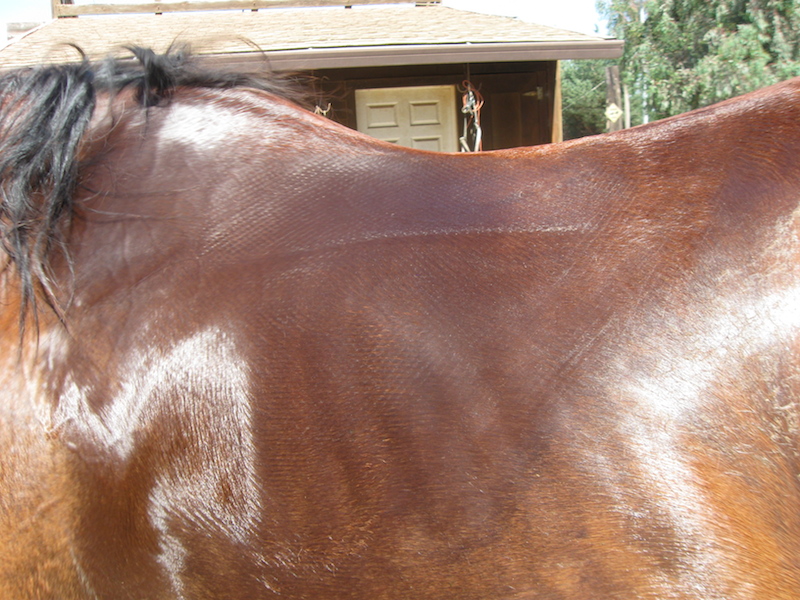 PS – do you see the glint of ribs above? It can be really hard to tell body condition score from a picture, and Farley is an example of how a horse with a well sprung rib cage that can easily fool you into thinking they are fatter than they actually are. 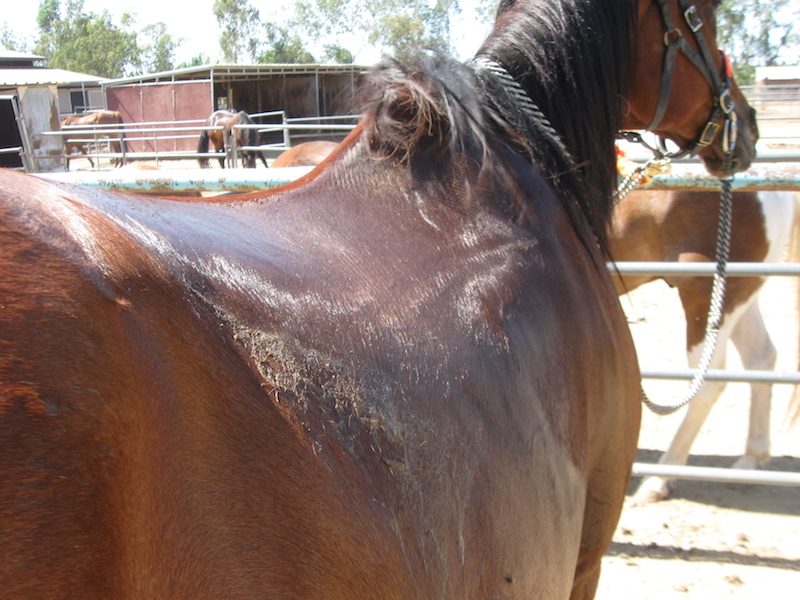 There was a dry strip running the length of her spine and wither which I don’t know what to make of…..

I get a dry line using a treed saddle too which I’ve always considered a good thing. 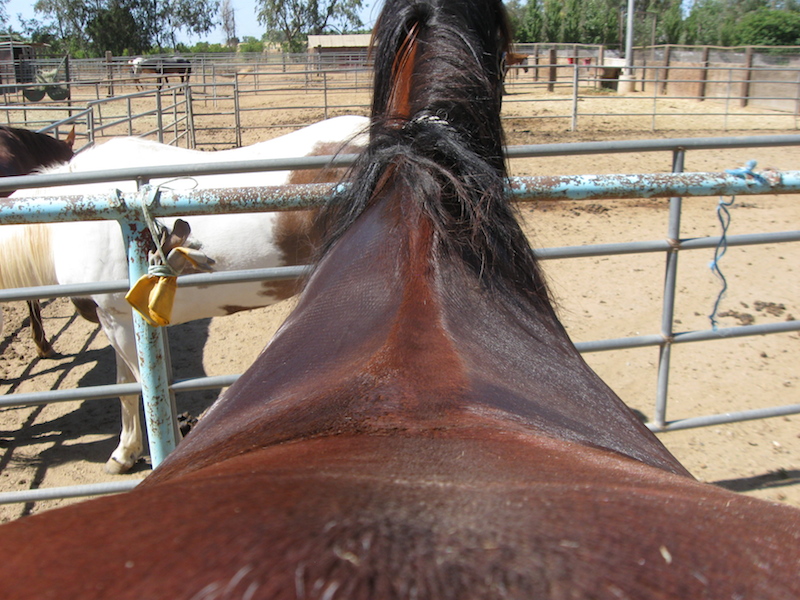 I like the saddle. I don’t love it. I don’t know what Farley thinks about it. Short term it was a very positive response – but whether that was because it was “different” or actually good I’m not sure.

Farley isn’t overly “concerned” about wither pressure. I keep an eye on it for obvious reasons, but she’s an honest horse who usually tells me what and where she’s being bothered. Ideally I would be looking at a “cutback” Freeform that gives more wither relief, but they are hard to find used and a new free form is not in the budget. I’m doubtful that a classic will work for her long term, but an endurance friend who is my size uses her classic on all sorts of “withered” horses (LOL – I crack myself up) for long hours and miles without an issue – including some that look suspiciously like Farley. So, I’m keeping an open mind.

I’m borrowing the saddle until Wednesday so I’ll get a couple more rides in and use a variety of pads and see what happens. If nothing else, I’ll know more about treeless than I did before!

Now that I have bored you’all to tears, those distant relatives at your memorial day BBQ you have to entertain will seem like an almost enjoyable reprieve!

18 Responses to An experiment