Funder suggested these head phones for my 50K.  I wasn’t impressed with them on a day to day basis – not bad, just “meh”. However for long hours on the trail, lots of sweat, and lots of imprompto conversations with the runners around me they were WONDERFUL. I was able to wear a Buff and sunglasses and these headphones without them causing any issues or irritation. That’s a lot of potential “things” around my ears.

Liz has also recently bought a pair for use in the saddle and raved about them….which reminded me that I wanted to see whether they would work with a helmet+sunglasses on horseback!  I’m not as concerned with “stuff” in my ears however, the most ANNOYING THING IN THE WORLD, is catching the cord of ear buds on something and having my EARS YANKED ON.

While demo’ing the freeform for the first time, I also remembered to snag these from my running bag…I didn’t want to clutter the already cluttered post about the freeform so saved these pics for their own separate post.

I know a lot of people have concerns about safety with headphones and riding and may be interested in my experience, beyond the short sentences I wrote here in my 50k recap about gear. 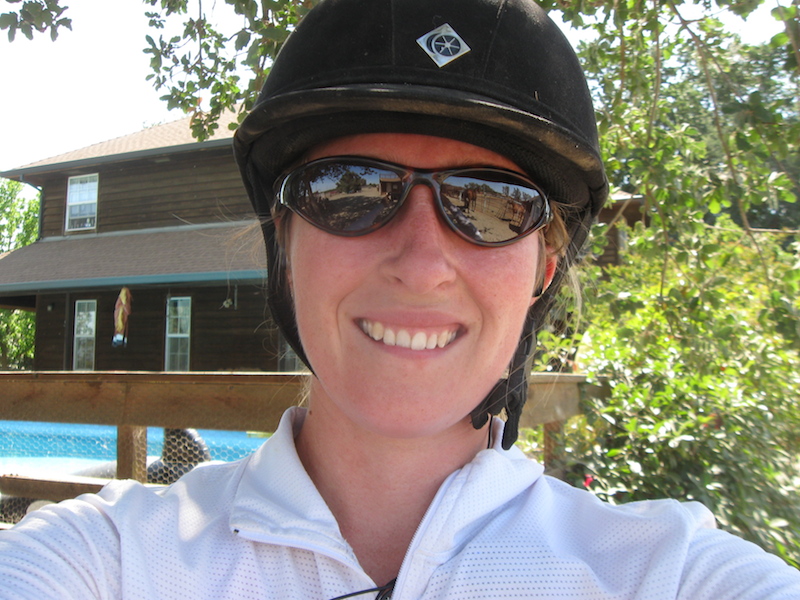 I was too lazy to dig the Tippeary helmet out of my trailer to go on my 95 degree 3pm ride so wore my old dressage non-vented helmet. Wasn’t going to admit that…but since I’m posting these pictures I guess it’s no secret now! I am such a lazy endurance rider….

And now from the side…. 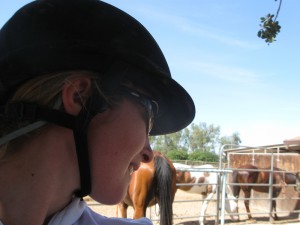 Like how I managed to include Farley’s muscle-y butt in the picture?

The little speaker thingy is sitting underneath my helmet strap in front of my ear.

Nothing is in my ear.

Like Liz said in her post about them….if you turn them up loud enough people around you can hear some noise….however you can also turn them down enough that no one can hear them but you still can very clearly.  Because they aren’t *in* your ears you don’t get that “sound blast” if they are turned up really loud (by accident in my case, because I was listening to the ipod in the car or something). But it’s suprising how low you can turn down the sound and still hear everything perfectly.

They worked REALLY well in the saddle- once I figured out where to clip the volume thingy. I ended up clipping it to a bra strap because it kept bouncing off my collar.

When I first took them out of the package I was dismayed how big and bulky they seemed – however both running and riding down the trail they have functioned flawlessly with absolutely no issues wearing a ponytail/hat/helmet/sunglasses/buff etc.

They also hold a charge well – I haven’t recharged them since the very first time I used them.  Since then I did my 50k, a bunch of night time audio books, and a number of runs (and now a ride!).