Home » Uncategorized » What we obsess about

What we obsess about

I’m taking Farley on extended ground driving trips (ouch my poor feet).  She’s good, I’m good – but I’m letting time be our trainer. It’s only with time that I’ll get tired and lazy and make mistakes. It’s only with time that something random and weird happens. So the current goal is to ground drive enough to increase the chances of “stuff” happening.

And I found myself staring…at her feet.

Her feet seemed much happier with the drive than my feet. 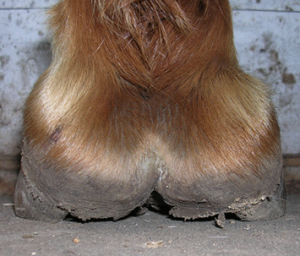 What I really wanted was a cute little cartoon. What I really NEED is to finish reward blog posts efficiently so I can continue to study.

Apparently feet while driving are the equivalent of ears while riding.

By the end of the drive I had concluded that the lateral-medial balance of her feet looked pretty good except the left front. It wasn’t apparent when we were standing still, but in movement it just looked…funky.  I spent way too much time basically crawling on my hands and knees in the vicinity of her hocks as we drove along and making hand movements to decide if a hoof is toeing in whether it was the medial or lateral side was too tall…until I just looked at the break over, which was occurring laterally from midline and used THAT to tell me that the medial wall needed a couple swipes with the rasp.

Hooking up the cart will be a blessed relief because it’s not as easy to see her feet, and then, like in the saddle I can obsess about her ears. *sigh*. 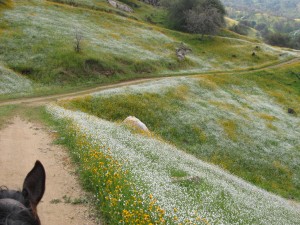 Riding in the dark pro: can’t see ears, must actually keep chin up and ride. Con: can’t see pretty scenery (although if I’m staring at the ears am I actually appreciating scenery?)

PSA: For my next “blog credit” earned through copious amounts of studying I’m planning on migrating my hosting service. This will probably create some down time on the site. The end result of this “planned” downtime will hopefully be less downtime and a more responsive server in the future, so bear with me.

*Oh, you wanted to hear about my 2 moments of stupidity and excitement? Lots of good stuff happened on the drive too, but I’m just guessing you are not nearly as interested in how she whoa’ed and stood so nicely, or how I adjusted my harness on the move.

No, you want to hear how I actually dropped a line when I squatted to take a….errr….”break” on the trail. Turns out this little maneuver is much more complicated than with a saddled horse – Farley accustomed to this ritual tried to turn and face me and I was in an err….compromised position, and my lines being really too short sailed merrily away.

Everything was resolved with minimum of drama and I added it the list of things that were successfully survived and glad happened on the ground instead of with a cart.

The second thing was firmly in the category of “stuff happens” as opposed to “Mel’s stupidity”. Near the end of the ride she tripped and did some very awkward movements to keep upright. I *think* it was because of the overcheck rein – she wasn’t able to drop her head completely to help wrench herself up.  A part of me wants to take it off so that she can do exactly what she was trying to do – catch herself when she trips on uneven footing. The other part of me was really glad it was on when twice during the drive she stopped and tried to scratch a leg or her side. Especially when hooked up there’s a lot of *stuff* to catch bits and bridles if they do that. I have it adjusted REALLY long – she can get her head below her wither easily – just not much below that. Just like any other piece of tack that is functioning like a training aid, there’s risks and benefits. I think right now in the early stages, the benefit still outweighs the risk.

7 Responses to What we obsess about