Challenges of the home hospitalized horse

I thought I was well prepared to take care of a critically ill horse at home. After all, I am a decent horse person combined with three-quarters a vet in the midst of year dedicated to managing complicated referral-hospital hospitalized patients.

Ummm..no. I’m going to share with you some of the most surprising and difficult aspects of providing care at home for a horse that ideally would be hospitalized.

(Usual disclaimers apply – discuss with your veterinarian what is right in *your* case, but this is a list of things I did not consider when offered home care as an option and some things that your vet might not think to tell you).

Let’s assume you have some sort of medical training and running fluids in a catheter is straight forward and really no big deal for you. Armed with the knowledge and technical know-how, I thought it would easily translate to home.

If you aren’t accustomed to running fluids at a hospital, than you will be under no illusions that it’s going to be easy and probably won’t be surprised by how hard/stressful it is.

Spending the money where it counts

Let’s assume your motives are very similar to mine when it comes to giving your horses at-home care. Namely to make those dollars go further….

When you are putting yourself through the sleepless night and round-the-clock care to save money, it can be hard to not continue that trend when it comes to supplies. Here’s the reality. Because you are doing this at home, you can’t get away with less than optimal supplies and equipment – you need to do BETTER than if you were in a hospital because not only do you likely not have the ability to replace stuff (like catheters), the environment is also much dirtier and harder on the equipment (not to mention you are likely more tired or less experienced than paid staff at a hospital and more likely to make mistakes). This means that when the vet says “use elasticon to wrap the catheter site”, you spend the $16 or $20 bucks on elasticon to do the job, and not the much much MUCH cheaper vet wrap. Elasticon will do a better job protecting the site, even though in most cases in a hospital setting perhaps you can get away with vet wrap. Maybe most of the time you can get away with reusing needles or syringes for injections, but if the vet says “change needles out after drawing up drugs” or “use a new syringe every time”, then do it regardless of cost. Even if you get away with the practice *all the time* in a hospital. Don’t try and save money in a way that will sabatoge your efforts to manage your case cheap(er) in the field.

Your impact on the clinic

Realize that *you* are a lot of work for the clinic. I tried to be mindful of this. Since the doctor would usually check in every 24 hours or so, I tried to save questions and concerns that were not immediate for those phone calls. Yes, the vet is there to help, but there is a balance between calling them every hour with concerns and being a little bit self sufficient. When you took up the task of doing home-care and against the recommendation to hospitalize and deciding to do it at home, you also took on more responsibility for your horse’s care.

You are going to be really really tired. Like, getting-up-every-3-hours type tired if you have to do frequent catheter flushes. Combine sheer not-enough-hours-of-sleep with worry and decision-making fatigue, and you have a recipe for *not* being able to emotionally process information or make good decisions. Not to mention living each and every up and down as it happens (which you won’t necessarily do if they are in the hospital). And as both the primary caregiving AND the person ultimately responsible for treatment decisions (together with your vet) this becomes a very delicate balance. I cried a LOT. I would barely hold it together for mature phone calls with the vet and then dissolve into sheer sobbing as I had to process yet another piece of bad news, or decide yet again whether I was going to spend another thousand dollars to do XYZ, or just wait it out.

I won’t lie. This isn’t ideal. It’s best if you can give some of the responsibility to someone else. Or at least have someone you trust tell you when it’s not the right time to make big decisions.

You can say “I won’t sleep a wink if my horse is in the hospital” but that’s different from actually not sleeping a wink because you were the primary caretaker during the illness.

Yes, money was a concern. But there were 2 other reasons I made my decision.

1. Mentally for the horse

I felt like ML was unstable enough, that the additional stress of hauling her (she’s only been a trailer once) and being in a new place wasn’t offset enough by the higher quality of care and monitoring she might have had at the clinic. Stress kills or at least doesn’t help and I felt like I had a better shot at turning her around if I kept stress as low as possible.

This won’t apply to every horse. If it had been Farley, I wouldn’t have cited this as a concern, since I know hauling and being in new places isn’t a big deal.

I didn’t want my young horse, who was likely going to be uncooperative for some procedures, roughed up.

I didn’t want my sweet 2 year old to come out of the hospital head shy, needle shy, and less trustful of humans. Her mental well-being was equally as important to me as her physical well-being.

As it turns out, this wouldn’t have been an issue with the clinic I was using. After watching the multitude of vets who came out and handled ML during this crisis I can safely say that this clinic hires excellent horseman who have exceptional handling skills and ML’s mental well being was as high a priority for them as it was me.

Unfortunately this IS a problem at some clinics. I’ve personally seen especially young horses handled in ways by medical personnel that make me sick to my stomach to think of any of my horses being treated like that. It’s hard in a hospital setting. You need to do something, the horse is resisting to the point of being dangerous, you are frustrated, and worried about your safety, and you are faced with 5 other critically ill horses *also* needing care. You know you can do something to make sure that horse doesn’t do that *this time* and damn the future behavior consequences.

I’m fine with my horses being twitched, restrained, and handled in ways that I wouldn’t do as a *horse owner* in order to get a necessary procedure done, but I do not want my horses hit, struck, popped on the head or handled in other ways out of frustration or anger.

Thus, as a horse owner, seeing what I’ve seen over the last couple years I’ve lost my faith that my young, scared horse is going to be treated in a such a way that is fair and safe in a clinic and I won’t leave my horse at a clinic I don’t personally know and trust.

Again, not an issue with the clinic that I used for this episode – their excellent reputation in the community was completely validated and in the end, I would have been comfortable dropping ML off with them, knowing she was in capable and fair hands.

Here’s my top tips if you find yourself managing a rather complicated case at home. 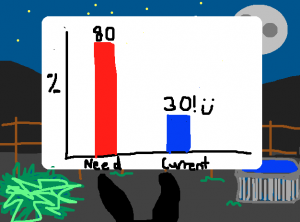 9 Responses to Challenges of the home hospitalized horse