Home » Uncategorized » What the heck happened to MerryLegs?

What the heck happened to MerryLegs?

If you are my facebook friend and saw this status update Tuesday afternoon, you probably have some questions:

“Whelp spoke too soon. After 24 hours of looking really good, Merrylegs has relapsed to a fever of 107F. Why she isn’t on the ground seizuring and dead I have no idea. I’m suitably freaked out, as it the vet, who said they’ve never seen pigeon fever with a temp this high . They will be here in an hour to place a catheter and they are going to let me run the IV fluids etc here at home to save some money. She’s not insured and I don’t have all the money in the world. Please say a prayer for us.”

In fact, if you aren’t my facebook friend, after reading that, you probably have some questions.

What the heck happened?

Which brings us to Tuesday at noon.

Where I went out to visit and do my noon treatments (cold hosing, abscess care, temp check) and found that her temperature was 107F

I checked my thermometer. It’s one I “borrowed” from school (accidentally actually) so it’s not a 99 cent unreliable piece of crap. It was working. I verified her temp several times and then called the clinic again.

The vet was in disbelief. He asked me if I was sure it was pigeon fever (I’ll believe what ever you tell me doc and as of 48 hours ago they were telling me pigeon fever…) We talked about my budget and options. Being a fourth year vet student they were willing to do a lot of the treatment myself at the ranch so my dollars would go further. (Tangent: I’ll do an entire post on the challenges of caring for a “hospitalized horse” at home at a later point).

What was going on? She was way way way sicker than she should be with just pigeon fever (“PF” from now on). You don’t see temps this high. It could be viral….but usually those spike fevers over 48 hours or so – and we were going on day 8 of fevers. Even without a specific cause, the game plan was to do 48 hours of supportive care and then reevaluate.

My hopes were not high. Between the time the vet was called, a catheter was placed and we started the first 10L bolus of fluids she had decompensated to the point where her (I’m going to use some doctor terms here – sorry) mucus membranes were injected, her CRT was slow, she was even more depressed, her heart rate was 80, and she was making grunting sounds as she breathed (we believed from pain). She also had muscle fasciculations.

Then the final piece of news that broke my heart. Harsh lung sounds and crackles on one side. Ultrasound confirmed the findings. Pneumonia.

This was not the picture of a horse headed in the right direction.

The vet went over her triage plan with me for the night. We were only looking ahead 48 hours, and knowing that if there wasn’t significant improvement by the ‘morrow, quality of life and prognosis was going to have to be seriously considered. Especially if sequela such as founder or colic occurred, which they often due secondary to serious illnesses in horses.

When I started this post on Wednesday, I had a bunch of details of exactly what we did, along with time frames so you could appreciate why I got to sleep in 1 1/2 hour chunks of time sporadically over the next 24 hours.

However, that was when I thought this was the final crisis. Now that I have so much to talk about we are going to gloss over that 24 hour period and hit the highlights (George R.R. Martin are you listening?) 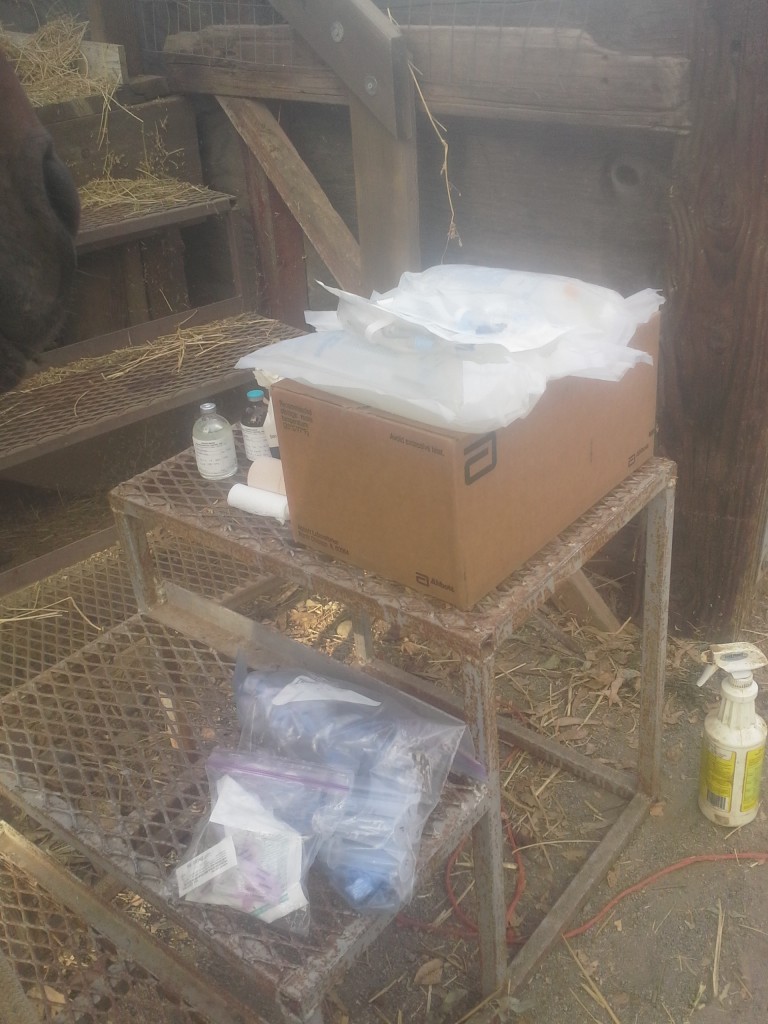 Lots and lots of “goodies” 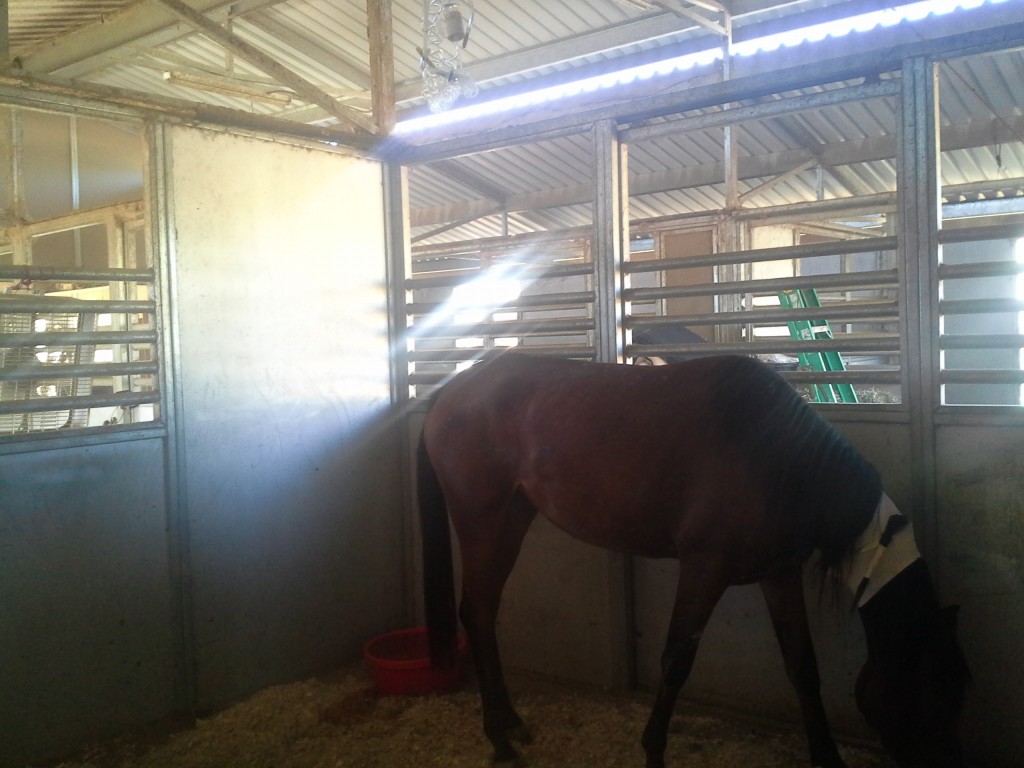 Sweet little hospital stall I got set up at the ranch. Has a fan and is the perfect size to hang fluids from the center. She doesn’t get to go outside unsupervised into the pipe stall area because she tries to rub her catheter out.

It was a long night spent in a sleeping bag on a haybale next to her stall.

But it was worth it because she looked OK in the morning. Not great…but systemically doing OK. No fever, and she was nibbling, peeing, and passing normal manure.  Her CRT was back to normal and that weird grunting thing she was doing was gone.

And then more good news – blood work came back and yes, there was evidence that major infection of some sort was going on, but her organ values look good – which meant she’s handling the NSAIDs and other medications well.

She also was slightly-to-not dehydrated. This doesn’t mean we shouldn’t have given fluids – she was shocky and there’s more reasons to give fluids than just dehydration, but it did make me feel relieved I had delayed our planned second 10L bolus of fluids a couple hours because I was worried about fluid overload from the amount of urinating she was doing.

This brings us to Wednesday morning. I’m was cautiously optimistic that were on the other side of things. We were on serious antibiotics that would completely eliminate PF as a concern – whether external or internal. She wasn’t dehydrated, didn’t have a fever, wasn’t foundering, and looked pretty darn BAR (bright, alert, responsive).

Funder came out and bought me lunch, helped me with my noon treatments and then distracted me for a glorious couple of hours.

Systemically she looked better than the day before. Not shocky, still pooping and nibbling although she wasn’t drinking as much as I would like (do horses EVER drink as much as we would like?). So I was more frustrated than freaked out, but also really worried. .

I felt like I was running out of time to get a handle on this. NINE DAYS history of fever. And while she was stable that particular afternoon, she was wobbling on a tipping point every day.

On Tuesday I had joked with the barn owner that my horse had malaria. But it was that thought that made me think of other little parasites in our area….

There’s only one thing in my geographic area that I know of that can cause really really high fevers over weeks, that wouldn’t be touched by any medications we had given her so far, that often occurs concurrently with other diseases (like PF).

Equine Ehrlichiosis. “Tick Fever”. My suspicion was only confirmed with several friends on facebook mentioned other cases in the area.

Merrylegs is not totally classic for the disease. Signs such as leg edema and some characteristic bloodwork changes are not present. “Stumbling” is a common sign and she’s not stumbling.  However, there is something odd and abnormal about how she’s using her feet. She hesitant over thresholds and inclines and is commonly misjudging the approach. I was so worried about founder on Tuesday that I couldn’t really look past any oddity beyond signs that might indicate founder, but Wednesday I realized there was something else.

It took most of yesterday to convince the vets to test for Ehrlichiosis. I was a good client. I did not scream, shout, or demand or call a million times. I was reasonable. I waited longer than I wanted to get a callback with the answer.

I resisted the urge to say all the things clients say to vets that is really irritating.

I am a fourth year vet student. They have shown me an enormous amount of respect and professionalism. The least I can do is return the favor.

I won’t lie. By the end of the day, I was almost ready to treat empirically for tick fever on my own regardless if they agreed. But in the end, the test was decreed a good idea. The point I made was that if it *is* tick fever, then everything we are doing are useless and the fevers will continue to break until we treat for it. And if it isn’t tick fever? Then that is information too, we can continue to do exactly what we are doing with confidence that likely we are providing her what she needs to pull through.

They can do the PCR test in-house, are collecting blood this morning and I should have results this afternoon.

I really really really hope that test comes back positive. Treatment is cheap, relatively simple and carries a pretty good prognosis. If it isn’t “tick fever” and she continues to spike a fever I guess it’s a game of wait and see

And that is where I am now, 9am on Thursday morning. Whether or not I get to do the 50 miler on Saturday will entirely depend on whether or not she still has a catheter in (requires q4 hour flushes), which is really disappointing. I’ve been looking forward to that race for almost 6 months. Sounds silly in the midst of such a crisis. I haven’t lost all hope, but I know it’s unlikely.

26 Responses to What the heck happened to MerryLegs?