It’s Monday and I don’t want to think too hard today. Why? Because I’m spending copious amounts of my creative energy and time planning my awesome dark-vintage-carnival themed reception. I have AWESOME help from my mom and let’s-just-call-her-my-aunt-because-she’s-that-amazing, but I do have some responsibilities  – namely centerpieces (weird things in antique cages) and putting together pictures for various short theater films.

It’s impossible to go through pics finding ones of me and Matt over the years (we are high school sweethearts) without coming across the horse-related ones too.

Here’s a selection from the hoards of pictures that I pawed through over the weekend, and just a few pre-blog stories that will be new to even my long-time Reader.

See, it’s not just having a blog that inspires me to do questionable things. (BTW there’s still good discussion happening over on the non-arabs for endurance post so if you want something less light hearted, check it out. ) 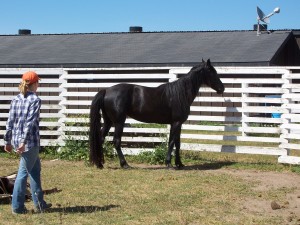 Minx and me doing our first “get to know each other” session in the roundpen at the ranch where she was being kept. I was finishing up my final year in undergraduate work and made a day trip to work with her after she was offered to me a couple weekends prior. 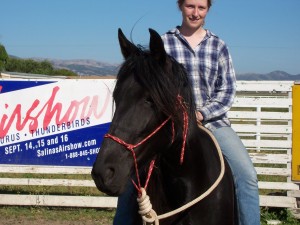 The session culminated with me hopping on her in the roundpen. Here was our first ride. 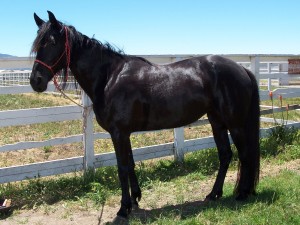 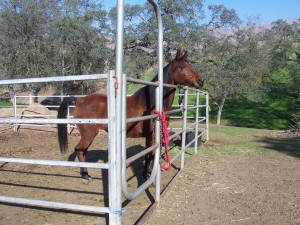 mmm…the eldest children do have it best don’t they? This picture of Farley was taken the day after I bought her. After riding her on the Tuesday before Thanksgiving, I paid and picked her up the day before Thanksgiving….and then because I had already planned to visit my aunt on Thanksgiving with Minx, so why not bring along the new yet-unnamed horse too? If I recall correctly, Minx was on hand-walking rehab at this point (30 min including some gradual hills), so I ground drove her on a couple of trail walks, but mostly rode Farley that weekend with my aunt out on her trails, which was mostly foothill cattle grazing land. 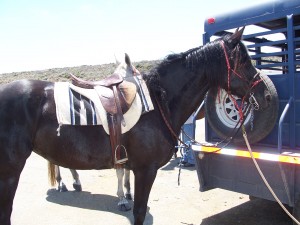 This might have been the day after the pictures taken above, or the weekend afterwards. I can’t remember.

Went out with a group of friends, the rest riding various horses out of the herd of Standardbreds that Minx was pastured with. While galloping on the beach, the saddle started to slip and I started to fall off the side, clinging like a monkey for a good while before biffing it on the sand. My sister, riding another horse close on my heels admited to watching me fall off in slow motion but had so much confidence in me “that any moment you were going to pull yourself up”, didn’t bother to move *her* galloping horse to the side, and instead galloped over the top of me with her horse once I finally hit the sand.

Thus this picture not only represents our first trail ride, and our first gallop, but ALSO the first time I fell off of her.

Galloping on the beach reminded me of another Minx story. I don’t have a picture but it’s too good of a story not to tell. 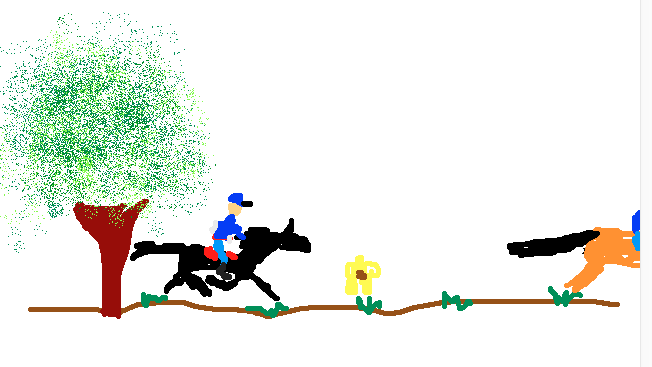 We went to a civil war reenactment together that featured a horse race in the middle of the day for spectator entertainment. I of course entered Minx. She was fast and fit, having done quite a bit of conditioning towards our endurance goals.

The gun (literally) went off and the cavalry guys took off at a gallop.

One of the stipulations of the race was that not only did you have to complete the course as outlined (go out across that field, go around that tree, come back over THAT field etc.), but that the winner was the first person STILL ON THEIR HORSE crossing the finish line.

Based on this criteria you can guess how prior year’s races had gone.

I knew, that not only was Minx FAST, we would also cross the finish line together. A huge bonus. Especially considering that this being a civil war reenactment I wasn’t wearing a helmet.

Minx unfortunately, even though we had galloped a multitude of times in groups of friends on trail rides recognized this as a RACE.

And you can guess what happened.

We flew off that start line in the pursuit of puny little quarter horses and mustangs at a TROT.

My ex-sulky horse was not fooled by my insistence that she should gallop, she knew this was a race and at a race you TROT.

The good news was that we weren’t losing ground on the pack of leaders. (which gives you an idea of how very very very fast we were trotting.

The bad news was we weren’t gaining either.

Then we were half way through the course and taking a hair pin turn around a tree. Several members of my competition were eliminated as their horses continued in a straight line, unwilling to turn. Others parted ways from their horses. And then it was down the back stretch towards the finish line.

Minx, once around the tree and seeing the leaders galloping down the back stretch finally kicked it into high gear and GALLOPED.

All of a sudden instead of just merely maintaining distance, we were closing the gap FAST.

I have no idea how fast we were going, except that everyone was galloping and instead of being 50 yards behind, I was only about 10 when we crossed that finish line.

Another 25 yards and we would have won.

My parents told me later it was very exciting to watch, and that the crowd really gasped when Minx turned the after burners on. :). 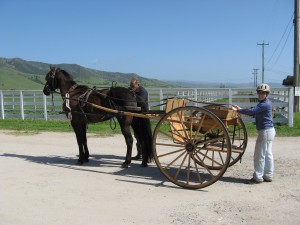 I know you’ve seen these pics (and the video) before, but no set of “firsts” would be complete without a picture of me hooking Minx up and driving her for the first time! 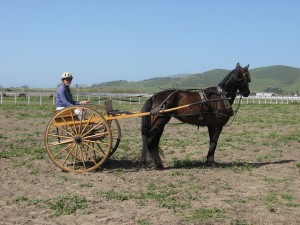 BTW….There might be another exciting “driving first” coming up soon…..but that is all in the future and right now we are firmly stuck in the past.

Truth: you will always be too nervous at the first ride to take ANY decent pictures. 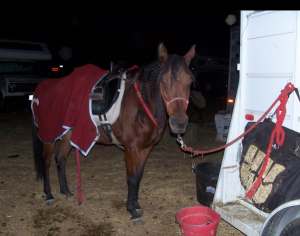 Farley had the knack of looking stupid in pictures WAY before my habit of selfies. 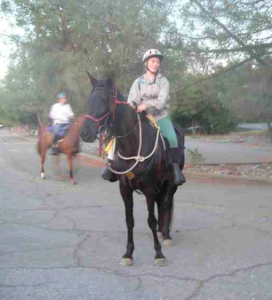 The only picture I have of me and Farley at our first ride. The only other pic I have is a rather generic “horse tied to a trailer” pic taken the afternoon before.

I posted Farley’s first ride story over the weekend and…….I found my original notes from that very first ride on Minx!!!!!!!!!!  Look for a rendition of my very first, flawed, mistake-filled endurance ride…soon.

Because right now I have to decide on the contents of some certain antiqued bird cages that may involve whether I can possibly find that creepy clown doll I had as a child, and brainstorming how to sew a tuxedo for a bird skeleton….

One Response to Firsts