Home » Uncategorized » Moving up a Distance

Moving up a Distance 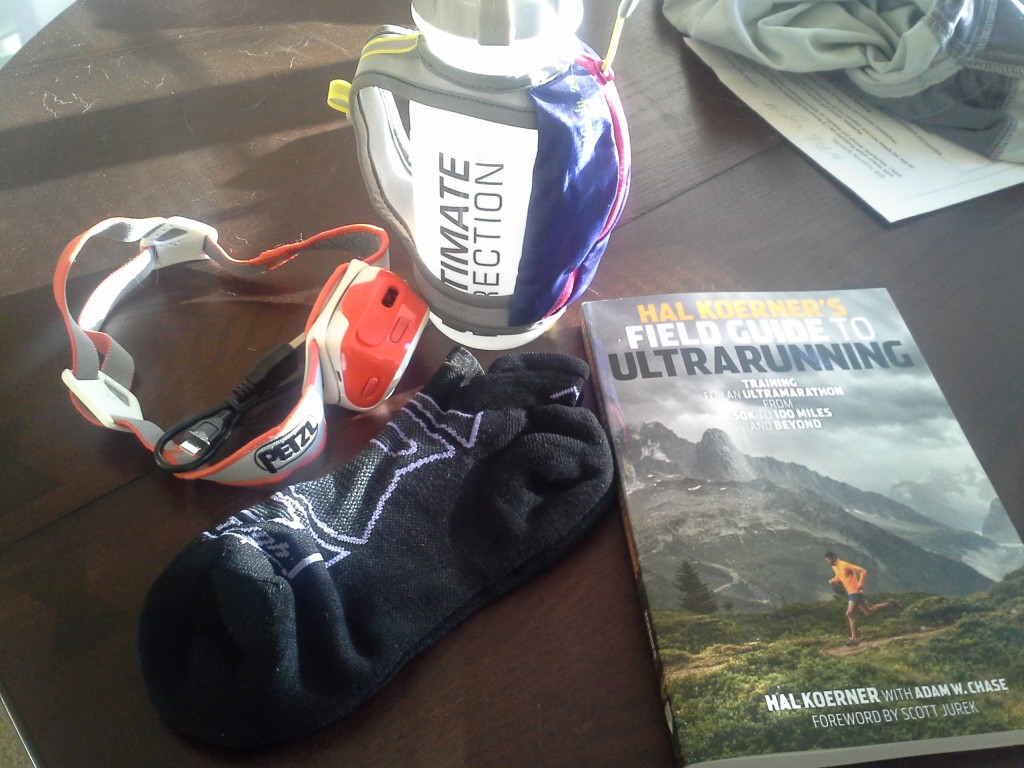 Somewhere between the Amazon boxes of clinic supplies and wedding stuff, I decided to include an order of running upgrades.

I have an older Petzl headlamp – but it’s not quite good enough to run at night. I’m tired of socks with holes in them. I saw this ultrarunning book as a review on a blog. I wanted a hand held water bottle option for races that were shorter with well stocked closely spaced aid stations.

In other words, I wanted a bunch of stuff that I didn’t necessarily *need*, but I *wanted*.

I haven’t run or ridden as much as I would like over the last couple weeks, and if I’m being realistic – planning a wedding and getting married (this weekend!) doesn’t bode well for my riding/running for the upcoming week either.

I have to admit that the other niggling thought behind this special package was that when I combine my finances with my soon-to-be husband, what is he going to think about $90 for a headlamp? or $15 socks? 🙂 (on the other hand, a fairly mentally stable Melinda = priceless).

It was when I was admiring my $15 socks that I saw this little note on the packaging. 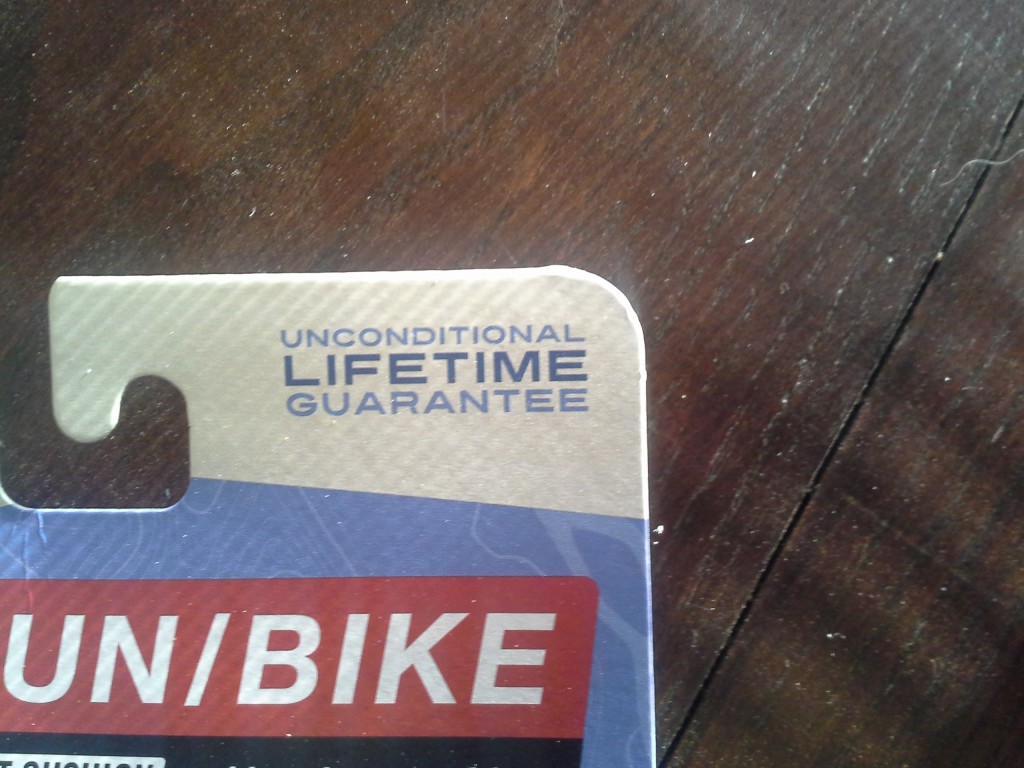 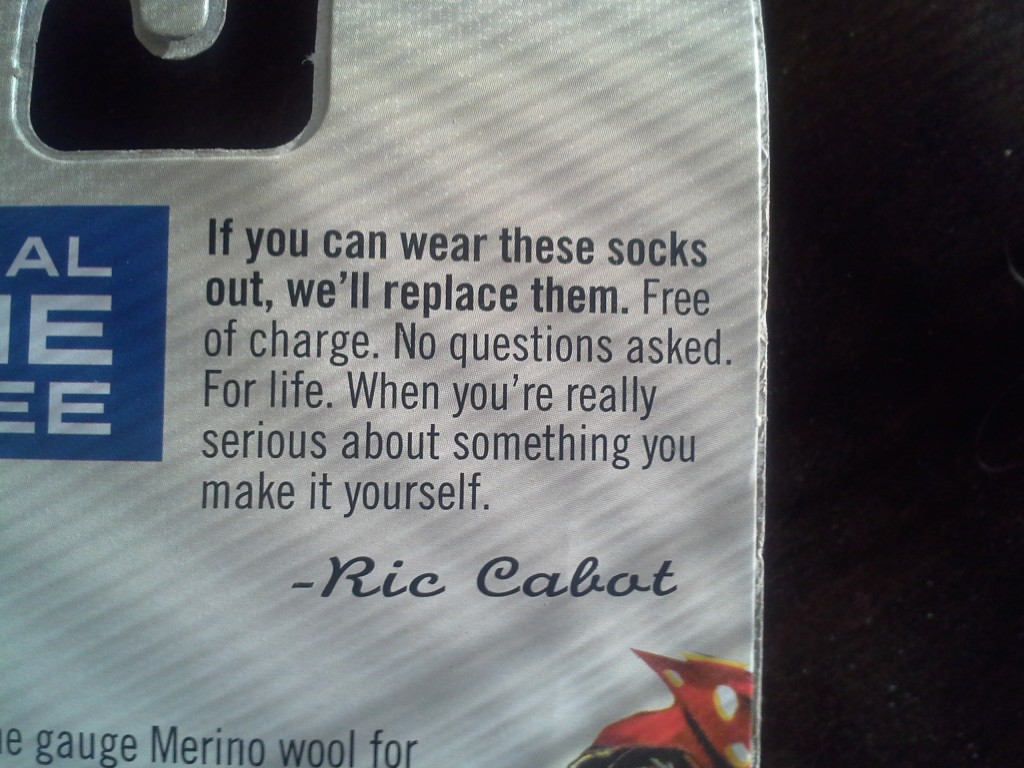 $15 is what I pay for my Balegras and is the same neighborhood as the other running socks I’ve tried over the years – Wrightsocks, smartwool etc. I did a quick online search of the other brands’ sites to see if they offered a similar guarantee that I was unaware of….and nope. Darn Tough may be my new favorite sock.

In the spirit of *almost as good* as actually running and riding, I’ve been listening to running podcasts while feeding ponies.

Trail runner nation podcast had a good one that discussed what it takes to move to longer distances (listen here). I thought some of their points were interesting and wanted to share them with you, along with my own thoughts.

I’m not sure how much of the concepts really apply to horses – mostly because I don’t race shorter distances, and I feel as a rider I’m riding my own mental ride during the longer stuff that is sometimes separate and different from what the horse is going through.

Ideas I heard on the podcast in italics, my editorial in bullet points.

The most glaring differences between 5K to a 10k:

The 5K is painful the whole time because you are going out hard. In the 10K you have about a mile to settle.

Less commitment to training required than 10k for runner just getting started.

In the 5K it is extremely difficult to make up mistakes and early position is important. The 10K has more room for error.

For those runners in the back of the pack a 10k could take an hour or more. That means for some runners this might mean a gear change (carrying a water bottle etc.) when switching from 5k to 10k.

Comparing the 5k/10k to even longer distances…..

Fueling and hydration is often optional at the shorter distances.

If you are pushing for a goal time in these shorter distances (5k, 10k) walking is usually failure. Compared to ultra distances where walking becomes a strategy.

Where the stickers start!!!!

OK, fine. There *might* be bigger differences than the fact there are stickers available for your car.

Cramping in a half marathon is not usually an issue….but can become an issue in the marathon. (This might not true for back of the pack half marathoners).

In a half marathon if something goes wrong, can usually grit your teeth and get through it.

Need to know body better in the marathon.

Training for a marathon takes more commitment than for the half.

Start of the mental game (can I do this?).

How 50k different from marathon: Terrain. That’s it.

This is the break between traditionally trail runs and road races. Yes, there are exceptions both directions, but in general by choosing a 50k and beyond, you are signing up for a trail experience that goes beyond the simple distance.

In general this means that Footwear, Navigation, and Proprioception on the trail becomes very important.

Instead of breaking it down like the they did on previous distances, the discussion of 50 milers and 100 milers was more of a…..general discussion.

I was sorta disappointed since I’m looking at the 100 mile distance nervously and so much of their other advice was spot on in my experiences, which made me trust what they had to say about the mysterious 100 mile distance.

For 50 milers every thing changes. Pacing and strategy are completely different from a marathon. Finding a pack to run with is not as important. 50 miles is a long way to run someone else’s race – running your own race becomes very important whereas in the shorter distances running with the right “pack” is important.

Fueling very important. Many people find they need to eat real food and not rely entirely on gu’s etc. .

If you aren’t in front trying to win…..there’s a LOT of visiting and taking care of small stuff and taking pictures and posting to facebook….

The best way to summarize the difference between road marathon at a longer trail race? Aid station worker behavior. At a marathon, the aid station volunteers have arms outstretched with cups of sports drinks and water. At a long trail race, the volunteers have their arms outstretched….for hugs. The cups are on the table, the food is laid out, and the expectation is you will at least slow, and perhaps chat a bit.

What I find interesting is that at the 50 (and 100) mile distances the commentators ceased to talk about how increasing mileage races command an additional commitment to training. I’m not sure if that’s because they training commitment isn’t that much more once you get above marathon (ie there’s only so much time to train and you are already maxed out) or if they consider it such a given, they they don’t mention it. In my limited experience, the amount of training I put in for marathons and 50’s was about the same – the difference being that I choose longer races (I tend to use races as training runs up to my goal race) – but the mileage I’m putting in at home is about the same.

The difference between a 100 miler and a 50 miler is far beyond fifty miles.

The only other 3 clues I got from the discussion about running 100 miles was this:

4 Responses to Moving up a Distance