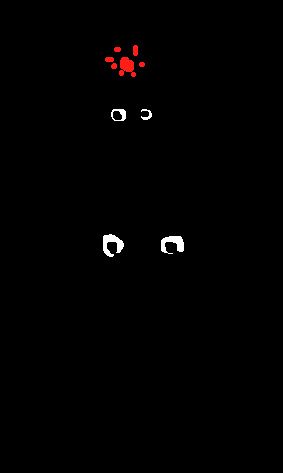 Hi it’s me. I’m heading out on Farley for a night ride. Same loop as usual, same plan. I’ll call or text when I get back. Bye.

More often lately Matt gets this message on his phone as I head out into the dark, regardless of the moon, to get some miles in.

So, I make a phone call during our walking warm up into the night, carry my phone on my body, and bring a headlight.

It’s deer hunting season and the trails I ride are on the edge of a wildlife area. Most hunters are heading back to their trucks by the time I head out, but I’ve gotten in the habit of wearing a headlight on the redlight setting. I can angle it up so that neither me nor Farley can see it, but hopefully it makes us a little more visible. It’s a good group of hunters in my area and it’s more likely we would run over each other in the dark  (suprise!) or get ravaged by the resident pack of coyotes than my chances of getting shot, but I figure the headlight will come in handy if *something* happens and someone has to come looking for me, or I have to hike out. And if I’m going to carry it for an emergency I may as well use it right?

Moving down the dark (and carefully preselected trail) at a fast, powerful trot, my normally squirrel-like brain is strangely calm and I can focus. Everything falls away except hoof beats, the creak of the saddle, my quiet shallow breathing, and Farley moving forward.

I can’t see sh*t so my eyes drift to somewhere beyond the horizon (instead of glued to what must be absolutely fascinating pony ears judging from the amount of time I spend staring at them), and my shoulders come back. Even though during the daylight I couldn’t tell you what diagonal I was on for the promise of a 100 bucks, in the dark  I can  feel which shoulder is moving forward and know immediately.

Micromanaging the horse in the dark is laughable and so I have to let go and trust Farley to make good decisions. This doesn’t mean I say “OK, run home as fast as you want”. What is DOES mean is that we work as a team, each contributing to the part of the ride in a way that makes sense. My job boils down to being centered and asking for straightness. She takes care of the rest. Speed is almost impossible for me to judge  in the dark, so “we are going too fast” is defined as how balanced and straight she feels, and if I’m able to stay centered.

I can remember my first 100 mile completion in the middle of the desert, with no moon, trotting on a road in a group of other horses. At the time I thought that my inability to do anything but focus on being centered and traveling with straightness was because I was exhausted. Now I realize that’s what riding really *is*. Riding in the darkness has a way of stripping everything else off of these core concepts . I probably did very little real riding on that day until that stretch of road in the dark.

It’s harder than it sounds. Small dips and rises in the trail means the horse alternately drops out from underneath me, and rises up unexpectedly. A small side step to go around a star thistle growing in the middle of the trail. Trying to stay centered and straight I realize that during the day anticipation prepares me for these obstacles, but doesn’t necessarily mean I ride them well. These are NOT excuses to not stay centered, balanced, and straight. It means I need to do a little less of her job and a little more of mine.

Unless something weird happens there probably aren’t too many 100’s in my near future until MerryLegs takes a crack at one. My absolute focus right now is keeping Farley sound enough to get through four or five more years of 50 mile completions so the chances of us trying our hand at a riskier 100 mile ride is low (but not completely out of the question).  Night riding is one of the reasons I LOVE 100’s, so I’m incredibly grateful I can keep a little piece of that experience in my life (and I can’t help but think that the skills refined during the night will translate to riding a certain green horse….it’s harder to get bucked off if your shoulders and head or held high, and if you are centered and asking for straightness!)