Still trying to shake a cold or bad allergies, so really don’t have a lot of energy left over for writing posts once I’m done with my school stuff. Running is out of the question, but someone suggested I invoke the power of pony and go for a ride today. And they were right – I feel a lot better and I don’t think I’m as congested.

Tig was a boring arena ride, so we will talk about Farley. 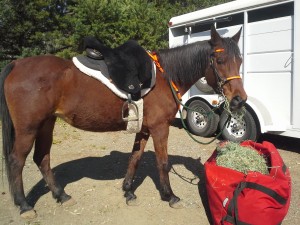 Farley, if you turn your head towards the camera all the time, no one will believe you have a decent little arab head…..

Tig is shedding, Farley is not. Whatever – Farley always seems to know when it’s time to get naked so I try not to overthink what she’s doing or not doing. .

As you can see my horse ground ties really nicely (am I cheating by opening up a hay bag? perhaps) and I wrestled the fleecey girth cover I bought for eight bucks at the convention onto her girth and we were ready to go.

There’s a reason for that.

Farley pulls back. Not often, and in fact, less often as the years go by. Maybe it was a couple times a year when I first got her, and now it’s once every couple of years. It’s a fear thing. If something startles her, and she hits the end of a halter or a rope, she completely freaks out by the pressure and thrashes around.  It is NOT a deliberate move to break free. She does the same if I let her drag a lead on a halter, if she steps on her reins, or if she loops the rope she’s tied to around a fender etc.

I just deleted 5 paragraphs that went into the whole issue of the pulling back and yada yada yada and I realized that I don’t *want* to write a post like that. The post I *wanted* to write was about how I rode my pony today.  So I deleted all that and we are moving onto the ride today.

Farley alternates between terrifying and thrilling me.

I’m terrified and holding my breath as she deftly navigates a trail completely covered with weeds covering holes, soft spots, and clay slicks AT SPEED. And then I manage unclench my teeth and hands and start breathing long enough to marvel her total focus and ABILITY, and how GOOD she is at this. Farley seems barely tolerant of me during these times. I’m allowed to be on her back, but micromanaging and distracting her from her JOB is not taken so kindly.

Sometimes I worry that she isn’t getting enough enjoyment out of life – maybe she doesn’t want to work all the time? Maybe she wants a fun ride with no expectations and just wants to play?

Maybe I’m being a bad owner by even allowing her to have such a strong sense of what her job is?

But then I remembered that Farley is a performance horse. A horse that I TRAINED to do performance.  More than just physically, I’ve trained her MENTALLY (the psychological and expectation component) for her chosen profession as well. And this is the fruits of my labor.  A day may come that she is no longer a 50 or 100 miler horse, but I suspect that in her heart she will always be a performance horse – but her job description might change into something resembling more “recreation”. But in the meantime….

Just to make sure she isn’t getting bored of the same old thing, sometimes we do something different. Today we went down to the beach, by the river.

Farley was not amused.

I could feel her rolling her eyes at me.

I’ve NEVER felt her rolling her eyes at me.

Then again, I’ve never dragged her out to the beach in the middle of our 10 mile loop to make sure she was having fun.

It was as if I had plucked a happy endurance rider off her horse and off the trail and plunked them down in the middle of a hunter jumper show to show them “other horse sports are fun too!”

She knows her job SO WELL.

It’s obvious when we are at a ride, but it’s taken me longer to catch onto it at home.

Then we turn the next corner and she gives me a nice medium trot. Now that’s NICE. I can both breathe AND ride.

And yet, I always forget.  That when I cross over to the other side of the levee, that she’s going to explode forward in her 12 mph trot and sail and float and charge and barge down that trail –  and turn into all business.

Every time I forget. And every time I’m blown away by the sheer ability in this horse take care of business (and yes, terrified) at an endurance pace.

And then there’s how she anticipates the trail. If 2 miles into a ride she knows we are doing our 10 mile loop, she’s much stronger than if she’s not sure whether we are doing the 12, the 7, or the 5, or the 3. She’s perfectly happy to do whatever distance – she just wants to know which distance it is before she allocates the amount of effort towards the ride.

It’s how I know that the mental and anticipation aspect in our horses plays a HUGE role in our (at least my) horse(s) performance.

This is the horse that knickers at me and immediately pees and meets me at the gate at home. Or when she sees a vet check up ahead at the trail, immediately slows to walk and pees without me signalling her. Or walks to the number takers at the start of a ride, and as soon as I call out my number starts trotting. If we do a ride more than once, she paces herself. I can tell when I’m 30, 45, and 55 minutes into a one hour hold by just watching what she does during a check. So I’m sure knowing the expectations of the day are important to her.

Asking Farley not to do her endurance “thing” at this point would be like asking the dressage schoolmaster to travel like a western pleasure horse. It’s not that Farley couldn’t do it, but until there’s an excellent reason, I’m going to hang on (remember to breathe) and enjoy the ride.