Merrylegs goes on a trail ride

On a pony rope of course!

I pulled out one of my larger diameter rope halters for the occasion, saddled up Farley and hit the trails. 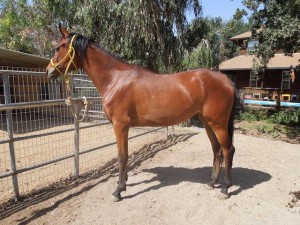 Merrylegs at 26 1/2 months. She’s shed the last of her winter coat.

In my opinion first time you give an intelligent animal a new experience, you are setting expectations in their mind that will last a life time.

At 2 years old, I am NOT trying to do any physical conditioning or hard core mental training.  But, in addition to us building trust and spending time doing traditional baby horse stuff, I’m planting the seeds that hopefully in five years will blossom and Merrylegs will continue in the footsteps on her half sister and become a spactacular 100 mile and have a solid start towards being a decade team horse.

With that in mind, I had three objectives for our first pony trail ride. 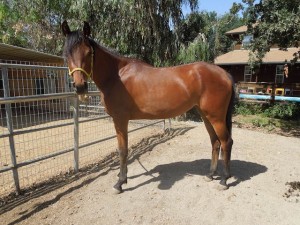 Even if our next rides are really short, or we just walk – it won’t matter because it won’t be how “we’ve always done things” when in the future I ask for something longer or faster.

I probably *should* have done a test run in the arena but….the perfect weather called and we hit the trail instead.

The first 1/2 mile went well – well enough that I didn’t want to do the short 1.5 mile loop – but there were a ton of bee hives blocking me from my original plan – which was an out and back that kept us on flat, wide dirt trails – perfect for a first pony ride.  But……

What the heck! Around the scary rubbish piles, up the single track levee access trail, and down the other side. Whoo hoo!!!!!  We were going on a *real* trail ride.

We moved out at a slow trot (probably about 7 mph) for less than a quarter mile on a wide dirt section *just* to prove that we could and then slowed to a walk. Objective 3 met.

Farley, now convinced we were doing the very familiar 3.4 mile lollipop went into a power walk that Merrylegs mostly walked with the occasional trot to keep up with.  PERFECT.  Objective 1 met.

Objective 2 was a little more tricky.  I didn’t want to ask for more than she had the mental or physical capacity to give. It was fun to watch her reactions through the 45 min……

For the first 15 min Merrylegs mostly stayed in her little “box” by my knee/Farley’s shoulder, but was very “engaged” in the ride.  No spooky, but interested.

At twenty min she was in the zone.  Moving briskly ahead on auto pilot….

At thirty five min min her mind started wandering and she sometimes would forget she had to pay attention to where her feet were going.  And sometimes when we would do a couple trot steps to catch up, she would experiment with trying to go forward out of the box.

At forty five min she was a very calm pony, walking back into the barn parking lot, having exhibited exactly the behavior I had hoped for.  No rushing on the way home, and I got the feeling that the forty five min we were out on the trail was just a tad bit longer than she had been expecting.  I really felt like I had timed it perfectly – asked just enough to make my point but not too much.

Coincidentally 45 min was about the max of Farley’s patience level for this whole piece of nonsense.

Just in case this whole post seems a bit “smug” and “look how perfectly I did everything” I could point out the saliva on Merrylegs’ face near the end of the ride where Farley snaked towards her with bared teeth?  Oh yes.  Farley was quite done with this nonsense at the forty three minute mark. Or perhaps more done with the fact we were walking home and I was not allowing her to have any fun?  *shrug* witch pony. 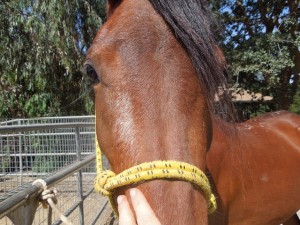 Showing off Merrylegs’ rather unique facial markings. See the roaning on the right side of her face?

Merrylegs and Farley are sharing a large paddock now.  They are incredibly cute together. Farley is being typical boss mare and after getting over a STRONG spring heat and making a disgusting spectacle of herself has settled into her rightful place – that of pushing Merrylegs off the best mash (they are both the same) and making executive decisions of what end of the pen they should hang out in.  Although both horses will call to each other if separated, neither is being stupid about going to work on their own.  Farley is all bark and no bite when she pushes Merrylegs and doesn’t require Merrylegs to go through any displays of submission beyond moving away a couple of feet. They can eat side by side and be in each other’s “bubble” with zero issues.  Merrylegs seems entirely content to take Farley’s lead and is non reactive. Seems like a bit of horsey heaven – plenty of grass hay, mashes every couple of days, and a best friend.

2 Responses to Merrylegs goes on a trail ride