Last week I dumped the grey and black water tanks on the motor home BY MYSELF before heading home last Friday. Like a bad ass. Perhaps you are surprised to hear that this was even worth mentioning.  Let me ask you, would YOU make any effort to actually learn how to do this if by playing the slightly disinterested “I’m just a slightly inept female” card got you out of it? 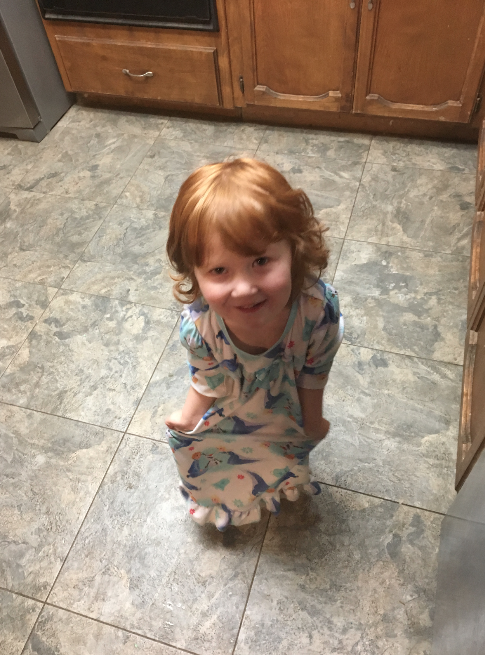 Yep, that’s exactly the expression you must use to get you all things (or out of all things…) in this world.

Yeah, I didn’t think so.

A wise person once told me that for others to step up to the plate – whether we are discussing a leadership position, a societal role, or a slightly distasteful task – the plate has to be empty. My husband was always very willing be on the plate of “dump tanks” so on the list of “life goals”, emptying the tanks went way down in the category of “practical things I’m sure I can learn if I have to”. Six weeks of living in the motorhome away from home seems to be a good time to go ahead and check it off as an official learned life skill. Box CHECKED. Don’t tell my husband please?

Adulting lesson #1: Using a similar technique, my then boyfriend – now husband – was convinced for almost 2 years that I was so inept in the kitchen that I could “burn water”. I never bothered to correct him of that notion. I’m not sure where “Mel can’t cook” came from, but I was just as happy to let assumptions stand. Now we share the cooking 50/50. Bets on whether the helpless “I’m so overwhelmed by all the details needed to dump the tanks” act is going to work after dumping my own tanks every week for 6 weeks?

Speaking of being bad ass, you know what I don’t have for you? A story of how I almost died in a flash flood because I went running on the trails despite flash flood warnings. That’s how adult I am nowadays. Instead I’ve been going to spin class (free gym pass as a proton patient) and sitting in the sauna, ignoring the signs around me that I should probably build an Ark.

For a place that isn’t suppose to rain much and have beautiful weather in the winter, it’s RAINED A LOT. But I believe locals when they tell me it doesn’t usually rain here. Wanna know why?

Because no one down here can f*cking drive in the rain.

I know it’s cliche. “Hardee har har….LA drivers in the rain joke.” But, my GOD, the way people drive when it’s raining is enough that I called on the Lord’s name MULTIPLE times on my drive to the gym this afternoon.

Here’s the scenario. It’s raining. There are sheets of water running over the road. There are multiple places where the road is UNDER water. The gutters are so full that they are a GUSHING torrent that look like little miniature versions of the big swollen angry winter rivers from where I live in northern California. Debris, white caps, swirling thick angry brown water that is spilling onto the sidewalk as it rushes towards the giant storm drains, knocking over trash cans that were placed in it’s way (I think it’s trash pick up day?).

The road I live on is normally 45 mph limit, semi urban area turning into official suburbs as it gets into town. Not a huge shoulder, alternating between one and two lanes.

I’m going 35 mph. You know, fast enough I can make my spin class at the gym, but slow enough I’m not hydroplaning and I can spot the spots where there’s significant standing water.

THERE ARE PEOPLE PASSING ME AT 50 MPH.

YOU STUPID ASSHATS. I’ve had my car for LESS THAN 2 WEEKS. It’s my first brand new car and probably my last. IF YOU PUT A SINGLE DENT IN THIS CAR I WILL *KNIFE YOU.

*Probably not. Please don’t call the cops. It’s a figure of speech.

It’s not everyone. I don’t mean to paint the *nice people of LA with the same brush.

*Everyone I’ve met locally has seriously been the nicest. Welcoming. Polite. Willing to stop their run on the trails to point me in the right direction. I don’t get honked at because I’m letting a pedestrian cross the street on a sidewalk.

But it’s YOU, driver of the lifted white van. Who felt the need to pass me (and two other cars) on the right, so fast you soaked my entire vehicle including the driver side window and I actually had to STOP my vehicle and wait for the water to wipe off my windshield.

And YOU in the little grey sedan thing that hit the standing water in front of me at LEAST 50 mph. I know, because I watched you impressively hydroplane and skitter across the lanes. Although by the condition of your car, this is a regular activity for you?

Next time I’ll bring popcorn and watch the show.

Pro tip. Closing your eyes and hitting the gas pedal in order to get to your destination as fast as possible doesn’t mean the rain doesn’t exist. 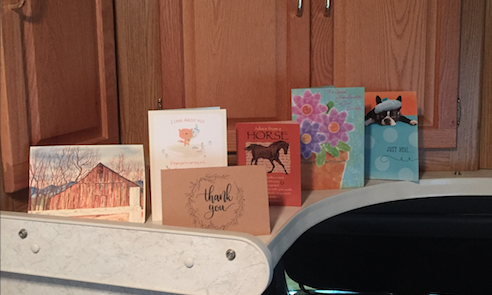 Starting a little card display. I got a REALLY cool one today that I’m waiting to use in next week’s post.

In other better news, starting the beginning of this week I’ve been able to make my way around town to my most frequent three or four destinations WITHOUT MY GPS. I feel very accomplished.  One of my friends told me it was too bad I was staying in the “*boonies” because I’m too far away from the really awesome touristy stuff. *hysterical laughter*. This is the most urban place I’ve ever lived. There are so many restaurants and things to see and do. The laundry mat has this little app thing that uses bluetooth to pay for loads. A museum dedicated entirely to Lincoln. Cool old buildings that are actually in use and not boarded up and burned out.

*I went to a state park that is near here that was touted as one of the only remaining “wilderness” areas you can get to locally. I stared at the sidewalk with hand rails and the hundreds of people milling about and definitely missed my Tahoe Forest and Trails.

I’m settling into a routine that first started to solidify the end of last week. My appointments are mostly in the mornings and I usually stay another 30 or 40 minutes after I’m done, visiting with the other patients. There’s 3 rooms with three different proton machines with all of us getting treatments M-F daily. We see each other every day in the waiting room and if you are in the basement, you are there because you are a proton patient. There’s a piano, guitar, books, puzzles etc down at level B (basement) but mostly it seems we all wander around and socialize. 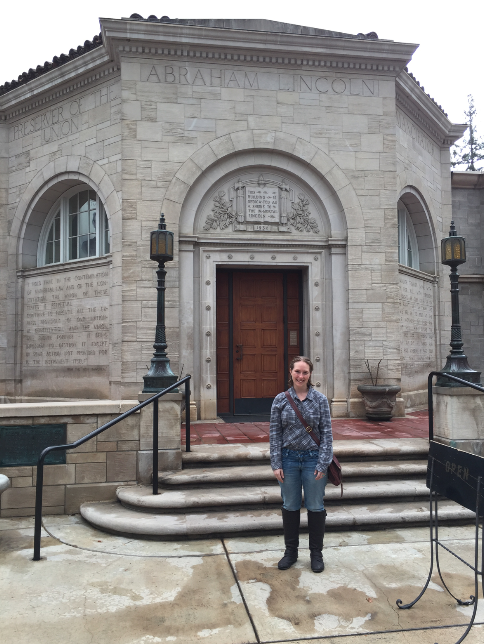 After I’ve had my fill of people-time (which doesn’t take long) I’ll head back to the motorhome for some dedicated introvert re-charging. I eat breakfast, do some writing, and put in some time on the fiddle. It’s easy to get distracted and sit too long (I’m used to standing for my job) so I try to pop out for regular 3 minute walks around the block to stretch my legs throughout the morning. 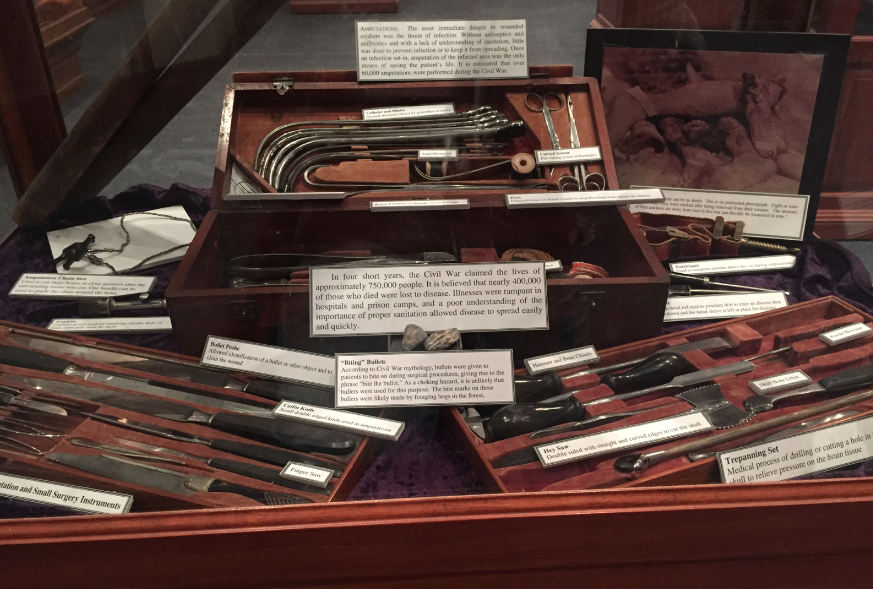 In the afternoon I either head to the gym for a spin class or go to the trails for a run. I always finish up at the gym for a shower (and some time in the sauna). I like to time it so I can go directly from the gym to one of the evening social activities that is usually around 5pm, or have tourist adventure in town and then onto the evening social. That means I only take the car out twice a day. Sometimes I break my rule, and go back to the motorhome after working out and then back out for the dinner social, but having a guideline gives more structure to my day.

Without structure it’s hard to prioritize and get the things I value done. If I don’t have a mindful routine, before I know it the whole day has slipped away. It’s tempting to surf the internet, chat with my friends, and binge read ALL THE BOOKS when I feel like I have unlimited time at my disposal.

Here’s a hard-learned adulting truth. Consider this adulting lesson #2. “Don’t drive like an idiot in the rain doesn’t count as an adulting lesson, that’s from the series titled “Don’t be an asshat”. There is never a time, no matter how unlimited a certain time or life event “feels”, when you can accomplish your dreams and goals if you don’t intentionally make it happen.

I know I need to practice my fiddle when I get back from my appointment and then write when I’m done, not spend 3 hours reading my latest book, because otherwise the music practice won’t get done and the writing falls through the cracks, because I have a run scheduled for the afternoon and an evening commitment.

At 7pm my day is done and I’m free to read until I’m tired enough to go to sleep, and that reading time is the best reward I could have for a day well-lived. I’m very pleased how quickly I was able to find a rhythm and routine to my days here.

Next week I plan to share what I feels like to be in the proton beam machine, and a little bit about the experience of being a proton patient at Loma Linda.