Snow lessons from a Newbie

Living in the California Valley I don’t run in snow much.

With a new position in Grass Valley, about 2,000 feet up the hill and out of the valley I have access to trails several week without making a special trip. I’m very motivated to get a run in on the 2 or 3 days a week I’m there because it’s a golden opportunity to sneak in a run without it impacting the family AND it’s race specific training because there’s HILLS (and a wee bit of elevation).

If I’m healthy I really have no business skipping runs.

Even if there’s white stuff on the ground. 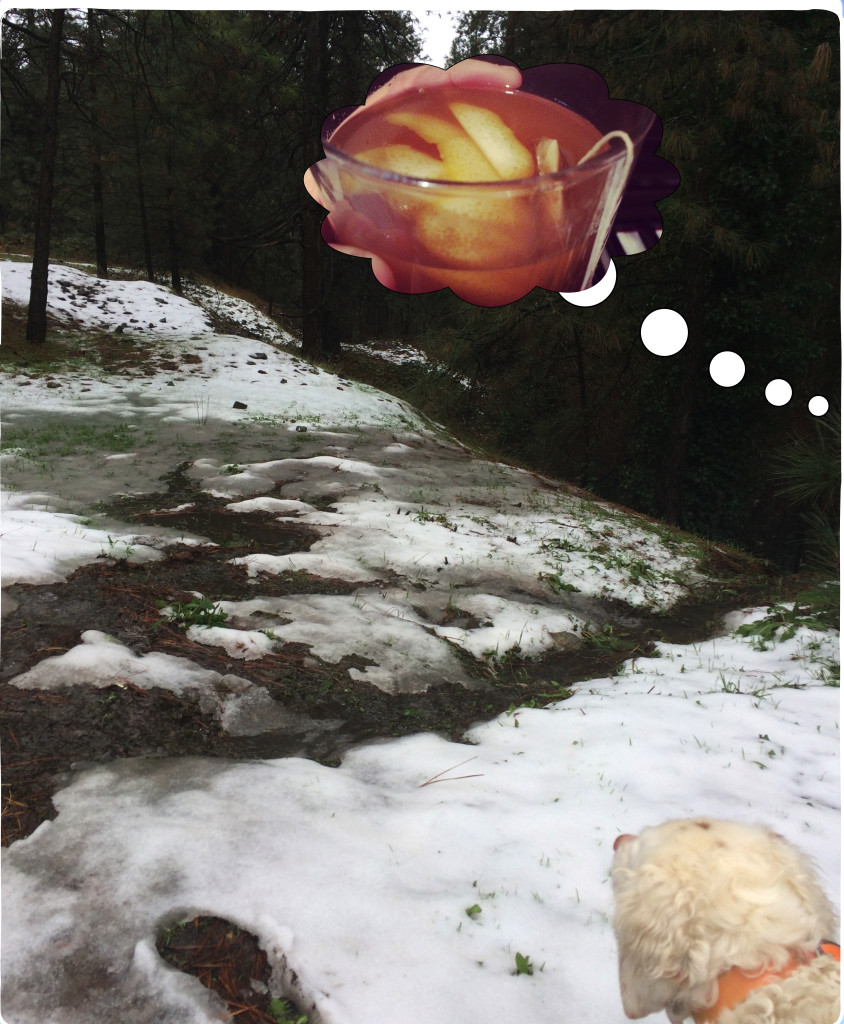 Now, I imagine that rest of you that actually get white winters are busy snickering at me. “Snow???? You call *that* snow????”.

But, let’s review. I’m a valley girl. Do you think I’m a prepared for snow? No I am not. In fact, our winters have been so mild in recent years most of my winter gear is almost *decade old and while it was good stuff when I bought it, I’m learning that these things age and do need to be replaced periodically.

*How do I know it’s a decade old? Because I didn’t own ANY winter gear until I started endurance. I did a couple of rides in the run and felt like I was going to die from hypothermia and exposure, and ran out bought good rain gear having thoroughly learned my lesson. At least that time.

Here’s what this warm-weather, don’t-let-that-wet-stuff-touch-me runner learned on her first snow run.

The wildcard is whether or not you will also be running in the rain. On Tuesday the answer was “absolutely there is rain.Why WOULDN’T the weather gods not try to make this as difficult as possible?”

Most of the time I feel like my shoe choices for a run are arbitrary. Usually my trail choice is “hard and rocky” or “hard and rockier”. Any distinction of why *this* time I ran in *that* shoe are probably more mental than physical. On Tuesday I was REALLY glad I had grabbed my Saucony Peregrines, arguably the only real shoe in my closet that is capable of handling slick technical trail conditions. I never took a bad step, never had a close call skidding out and the tread doesn’t collect and hold mud. This is the second time I’ve pushed these shoes in slick wet conditions and I’m impressed. They aren’t 100 mile shoes – they might be OK up to marathon distance for me – but they are definitely a tool I will keep around.

A lot. With the combination of a couple of inches of snow, running water, puddles, and uneven trail with roots and rocks meant I was kicking up water all over my clothes just like my mother used to tell me not to do on the way to school. I didn’t know it was possible that just an inch or two or water on the ground could expand into a arial substance that would soak me from shoulders to toes when I ran through it.

I’m used to soft foot falls through the forest, or the crunch of rock under foot. It’s so loud going through the snow and run off I couldn’t even hear my own labored breathing.

My feet were alternately not as cold as I thought they would be, and then just as cold as thought they would be…but doesn’t bother me as much as I thought it would. Sometimes my completely soaked feet were actually warm. I of course did that thing where I tried to avoid getting my feet wet for the first 1/4 of the run, made a series of unfortunate decisions that completely soaked my shoes and socks, and then got over myself, and powered through the water for the rest of the run. I’m really adverse to water touching me….need to remind myself that getting wet isn’t the worse thing in the world…..It’s NEVER as bad as I think and I spend a lot of energy hopping around and cursing trying to avoid the inevitable.

6. A lot of mental energy goes towards foot placement.

The 4.5 mile run felt like 7. I was definitely slower and I was physical and mentally more tired. Something to keep in mind if I encounter these conditions during a race. I kept thinking during the run how this was great training for WS 100 high country if I get in during a year that there is still snow in the high country on the day of the race. I could see general terrain ups and downs under the snow but I never knew exactly how far my was going to go through the snow before it was solid, or what the surface was going to feel like.

7. It was too wet to take beautiful pictures.

Which is a shame because the snow and green moss and overcast/raining skies were absolutely gorgeous. Granted I couldn’t take my eyes off the trail very often when I was on the single track, but this was one time that I appreciated the wider jeep roads because I could look around and appreciate what I was running through. It was like being in the middle of a calendar picture. A very wet calendar. The picture I took before starting out is the only picture I have to share with you.

In a light rain, a trash bag over a light wool shirt trumps a jacket if the temps aren’t ridiculous (it was about 40-ish degrees) and you are moving down the trail. I wore a light jacket on the run and regretted it. I know that it’s a balance between what’s best for the run, and what’s best for the scenario that you aren’t able to run and have to sit on the trail for a while, but I think my completely soaked jacket would have been worse than useless and I still would have preferred a trash bag. As I prepare for “anything” at the Black Canyon 100k I’m going to remember this lesson.

Does any one who runs in snow regularly have any good tips?

2 Responses to Snow lessons from a Newbie