Home » Uncategorized » In the Nick of Time

In the Nick of Time

This sounds very smart but it really boils down to a couple of different practical guidelines for deciding whether I should do something.

What you should NOT do is make a major commitment in ~45 seconds this is life-limiting and completely against these nice three guidelines above.

Like bringing home a puppy for your 5 year old.

That will probably live another 12 years (less if it’s a nice dog, more if it’s a sh*t).

I WAS A YEAR AWAY FROM BEING DOGLESS AND HAVING A DOG HAIR FREE HOUSE AND A POOP FREE BACKYARD. 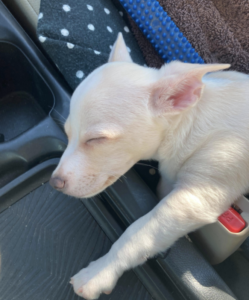 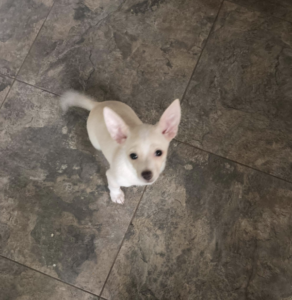 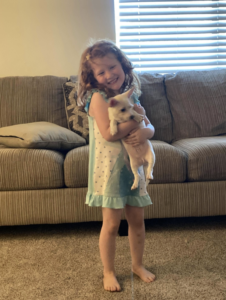 Rule number one is we do not keep anything that I bring home for work. Especially puppies. No dogs that would significantly outlive the 12 year old golden and 10 year old brittany. No dogs that were naughty, whiny creatures that try to put the world in their mouths and commit death by suicide multiple times a day.

Remember boys and girls, the secret to smugly sitting back and declaring your life is in order relies on not letting yourself get talked into other people’s crazy ideas.

And if you do get talked into it, it should take more than 45 seconds for them to do it.

The thing is Fig has begged me for a dog since she was old enough to talk.  So….I brought one home last year….and 9 months later it promptly died of metastatic neoplasia.

Our current dogs are 10 and 12 so we don’t really want to commit to another decade of dog life right now…..so I tried to convince Fig that guinea pigs were just as good as dogs and got her two.

It was about this time that Matt laid down the law of NO MORE SHELTER ANIMALS.

Fig was still regularly talking about Honey and how sad she was and how she wanted another dog…so I got her two more guinea pigs (that’s three total alive guinea pigs if you are keeping count).

I think the giant rodents are adorable little squeakers and Fig thinks they are okay…but when you want a dog, a guinea pig isn’t a dog.

Yesterday I some how found myself being talked into taking a chi pup home that I had neutered last week. He was born at the shelter and raised with his siblings and wonderful momma in the office of my friend and AC officer. He had negotiated a kids birthday party with flying colors. So….I brought him home.

I’m stressed the f*ck out.

Except my composition has a puppy whining in the background

Bringing home a puppy when you’ve given all your days off away to a new clinic (another ER that’s having trouble filling shifts), have a 100-miler you aren’t prepared for (God Bless America I still haven’t booked a hotel for Thursday night) in 4 weeks, have a couple of over night vacations planned in the next 3 months….That *is* the perfect time to bring home a puppy right? *&&^^&*(

But then I watch him chase Fig around the yard and follow her in the house….snuggle in her bedroom overnight…and play with my old dogs who are very gentle with him…and then maybe it wasn’t the worst decision in the world?

A sappy idiot. Who mostly feels like she has a black heart of unfeeling coal on a daily basis….but is reassured that she isn’t broken yet when she does impulsive stupid things that are based in trying to give someone else a bit of joy in their lives.

I was five, the same age as Fig when I got my first puppy, a stray that had wandered onto our rural property. We had other dogs before – big dogs with varying temperaments that I was wary of. My parents tied Johnny the stray puppy to a tree and when I went out to play with him, he jumped on me and scratched me with his nails. I really didn’t like it but I wanted a dog and  my parents said if I didn’t make time to play with him and find a way to deal with his keeping him off me he would have to go….so I would put on pants (I was a dress girl growing up!) and made up my mind to make this work.

A short time later we moved and had to leave him behind (my aunt bought the property and the pup went with it). My Dad had gotten into college and there wasn’t a place for him to come with us.

I asked a couple years later what happened to him. Johnny was renamed “Johnny pup pup” (or maybe putput? and he died a short time later. Maybe of rat bait, but now as an adult vet I sort of wonder whether parvo could have been the cause.

There were a few really wonderful family dogs when I was in high school, but the next time my life had room for a dog of *my very own* was when I quit my job and went to vet school. That dog was was Tess, the first dog of my very own since I was five.

I think that’s why I’m so sympathetic to Fig desperately wanting a dog. I remember that feeling despite being surrounded by siblings and cousins. I needed a companion to call my own. When I look back at Johnny pup pup, it isn’t his death I remember, it’s his happy jumping at the end of the rope, tied to a tree, and my parents promise that I could keep him if I put in the work.

As a vet I know all the bad things that can happen. Just because it’s a puppy instead of an older dog is not guarantee that we will have him for years and not months. But, sometimes it isn’t the time that matters, it’s the fact you gave it a chance.

Now excuse me, it’s time to let the puppy out to pee. Again.

3 Responses to In the Nick of Time