I’ve been running twice….twice…this week. And once I get done working on this post this *morning, I’m going to lace up my shoes and run a third time. That beats any other week in February, January, or December.

After Burning River last July, I wrote about how I felt I was on the cusp of burnout from running. I dialed back the running for the rest of the summer and fall, but for the last three months I’ve been on a running hiatus.

[Blah blah blah blah. On re-reading this post and doing some editing I really should have just deleted everything in this first section down to the first heading. But that’s the difference between my personal blog and something more polished for the masses to read. So it’s staying because it would count as a substantial edit after hitting “publish” which I have a rule against, and I give you the power to skim and skip down to my eventual point 😂]

A three month break isn’t burnout, it’s a healthy break. Compared to past running burnout episodes where I spent years without substantial running or a desire to run that wasn’t being fueled by guilt (I should want to run, therefore I will run) or fear of gaining weight (I have to run), this break wasn’t so bad. The thought of running didn’t fill me with dread, I was just simply filling the time with other things and running was on the back burner.

Yes, polo was a major “other thing.”

Turns out polo is just as time-intensive as endurance riding. No long conditioning rides, but there’s a million different types of riding and practice that need to occur.

Unless I have big running, riding, or writing project/event coming up I can theoretically manage to balance these three main hobbies in my life.

The problem is that I always seem to have a major commitment to one of the three at any given time so instead of a carefully balanced dance between the three, it’s like drinking from three different firehoses in quick succession.

Playing polo in Indio definitely counted as a big event and everything else got pushed to the side for the last three months. Now that it’s over and I have recovered, I’m determine to figure out what balance between the three great loves of my life look like.

Recentering…which is the word I chose to represent 2022. 😂 I know better than to pick something like that, it’s like the universe decides to “help” me grow into whatever crazy character trait I’ve decided is a good idea.

I can look back over decades of running and I think this is what sustainable running looks like:

It’s pretty obvious what I need to do.

The last couple of years I’ve been chasing after longer and longer distances and the rhythm of my regular runs have been disrupted. I’m too sore or don’t have time for those 30 min “foundation” runs. Without those short runs during the week, my running is more sporadic and it also makes my appetite swing wildly and I will binge eat. My weight wildly fluctuates and that makes me more obsessed with food and running and likely to restrict (and then binge), all compensated by the wild mileage I’m running. This cycle is not mentally healthy and isn’t sustainable. 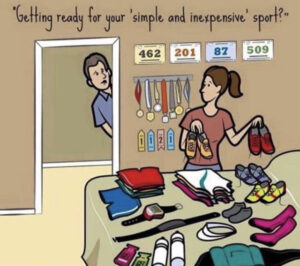 Solution –> Focus on nutrition and getting rid of any binge eating patterns. Change the thought patterns that Running or any kind of movement is some sort of compensation for volume eating. Eat what I need to eat. Fuel thoughtfully Move my body because it’s a good thing to do and not because it’s linked to what I’m eating.

Solution –> take a break from distance and go back to the 30-30-60 min run pattern. Commit to 3 runs a week. Be alert for any reoccurrence of disordered eating triggers and address them.

Also contributing is one of the most variable schedules I’ve ever had. In a single week I’ll work a half day, a full day with a commute, an overnight shift or two, and maybe even have a day off or two. There is no consistency that I can tie my running ritual to, and because I haven’t acknowledged how important that has been in the past to consistently running, the running just hasn’t happened. Solution –> create artificial patterns throughout my week. I’m using the app “Fabulous” to create these rituals and so far it has helped immensely. Having three general “touchstones” throughout my day is keeping me focused and on track for all the other stuff.  They are easy things. A cup of coffee in the morning, closing my eyes for 1 minute in the afternoon, and drinking a cup of tea in the evenings. But, despite the simplicity, performing these rituals three times a day helps me to stay focused and on track for runs, rides, writing, and all the other cool projects I want to do.

Here’s my current working hypothesis: Boundaries will lead to balance, which will result in something sustainable.

I’m running but refuse to give into the impulse to run until I don’t feel like doing my other goals.  It’s so easy to turn my 30-minute planned evening run into a 45-min run and not have time for my planned 20-min weight training post-run. But here’s what I know even if I don’t like it. Forty-five minutes of running on a week day won’t get me any closer to my goals than 30 minutes will, and making time for the *weight training will.

*Since making room for weight training I’ve noticed something weird…..I’m sorta starting to like it in spite of myself. Seeing the weights get heavier is kinda cool. But, I just want to check…..At some point weight training will make me feel stronger and not just weak and sore and old, right?

Some day I’ll decide to write another book, play in another polo game, or run another ultra. When that happens I’ll open the gate and let that particular impulse bolt around and create a little havoc and imbalance in my life….Afterwards I’ll gently corral it again inside a pretty fence of boundaries and practice recentering until it’s time for the next adventure and wild ride.

I’m discovering that life is sort of like running a 100-mile race. I’m running in the thirty-odd mile section right now.  Time to settle in. The fun and games is behind me but there’s still good running ahead. Time to problem solve the little things in the second third of the race so that the last third isn’t all a pain cave, focus on being in the moment, and remind myself often of the simple rules and rituals so I stay grounded and on track. Eat the good food but don’t stay too long in the aid stations, take the time to address the hot spots on the feet, and remember –> it’s not too late to fix any mistakes you made in the first third of the race.