With the excitement of the day recorded in Part 1, we can now move forward (or rather backwards) to the actual trail ride. BTW – Loreleigh and I checked on Sally Sunday morning and she doesn’t seem any worse for wear. A little tired, but overall gives the impression of being happy and content.

Katy and I met at the Overlook at 9:30am. In retrospect we could have made it an hour or two earlier. Oh well. Now I know for next time. 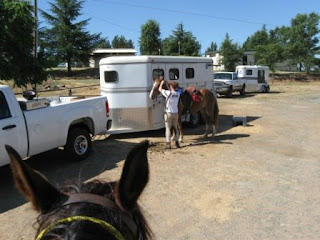 I brought Sally, my sister’s horse, for Katy to ride. Katy and I used to ride all the time when I was in junior college. She’s probably to blame for my love of long trail rides! For now the roles are reversed and I’m the one bringing her on trail rides! I brought a selection of saddles for Katy to choose from, and she settled on my Dad’s Australian saddle (which is for sale BTW). 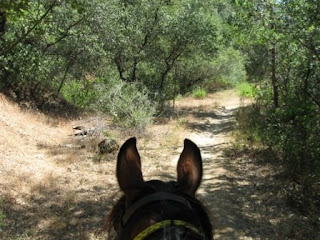 The trail was hot, but there was a breeze and lots of shade throughout the trail. Armed with directions from Kathy (thanks Kathy!) we made our way to Poverty bar and the river crossing.

Tada! No Hands bridge! At this point in the pictures, we are heading TOWARDS poverty bar, so going the “wrong” way on the Tevis trail. 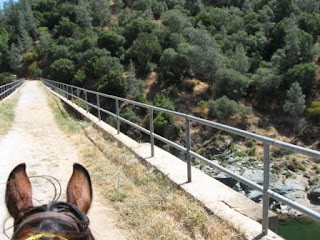 Katy has not had a lot of “stellar” experiences with mustangs and I was concerned that Sally wouldn’t be a good match.

I shouldn’t have worried – Katy and Sally came to and understanding very quickly and I think both of them had a lot of fun. 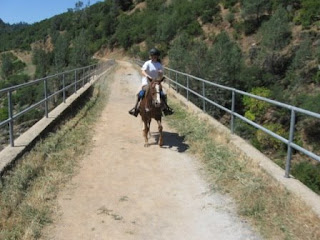 Down near the river crossing, Mustang Sally decides to give Katy a run for her money. After unsuccessfully trying to drop and roll – trust me Sally, Katy can read your mind and school you faster than you can blink – Sally tries to tried and true “mustang bush scratch”. 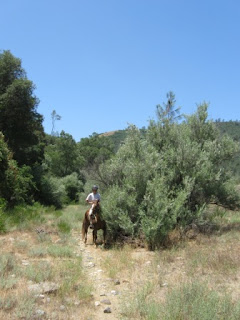 As a result Sally must work mucho harder than she might have….. 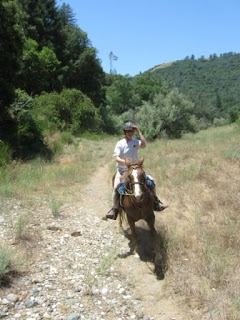 Look at the reach on that girl! Sally is only 14.1….maybe…..We discovered that she doesn’t really trot, instead it’s some sort of smooth gait that keeps up my Farley’s extended trot and is so smooth and effortless, no posting required. It seems to be very efficient for Sally. 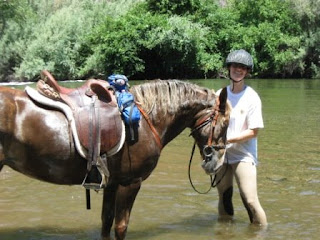 Horses and humans cool off. 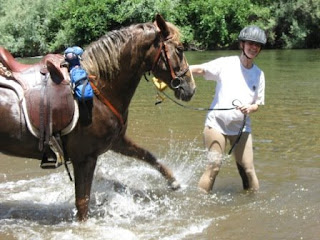 The water was SO refreshing. I usually don’t like getting soaked with my shoes and clothes on, but I didn’t mind at all this day. The temps were in the triple digits and it was HOT. Not more than 15 minutes after remounting my clothes were dry again…. 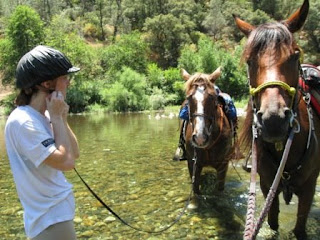 Picture of across the river, where I will cross on August 1. 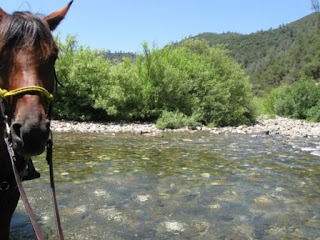 Heading back to the trailer. On Quarry road we flew! It’s open and very very hot so I wanted to get through it as fast as possible. We urged the horses into a canter and off we went. Farley would really prefer to death trot, but eventually picked up both leads very nicely (spooking as she went and giving me ugly mare looks). After some convincing Sally decided to put the power boost on and went into a canter. Sally doesn’t canter much. She’s inherently lazy and we always put our green riders on her so she usually gets away with her very fast trot/pace/gait whatever. When Katy kicked her into high gear it was similar to being shot out of a cannon. Her trot thingy may be smooth, but the only way to describe her canter is POWERFUL. Again, for such a small, fat (I mean “stout”) animal she can really reach and cover some ground. 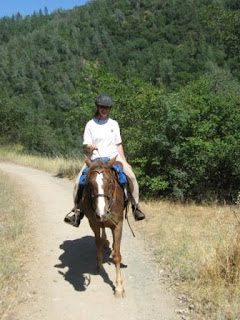 Stopping at a creek/waterfall for a drink. 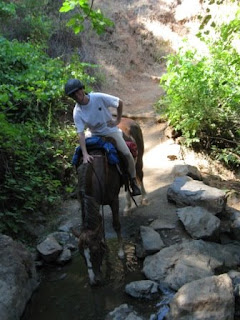 I think I remember this spot from when I did American River in 2007. Very refreshing and pretty. 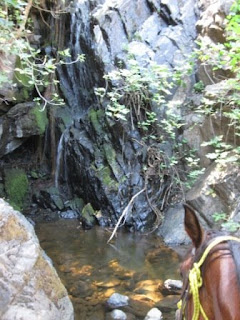 The ride went very very well. It took ~7 hours to cover 24 miles. Sally is not in as good a shape as Farley and we took it easy, including hand walking the last 2-2.5 miles in (which seemed to take FOREVER). I was pleasantly suprised about the “ease” of these trails and if everything goes well I should have enough horse to really make up some time here. This was the first time in YEARS I had spent significant time with Katy and it was great! I’m hoping that we can ride together on a regular basis.

I got some good heat training in. You know it’s hot when…..
1. The duct tape on your helmet for the flying nun impression melts off
2. The velcro lights on the interior roof of your trailer melts off
3. Your black tights dry *instantly* after exiting from the river
4. You are willing to drink gatorade that has been in the truck and is approximately the same temperature as a hot mug of tea (yum!)
My last preride is next Friday and Sunday. So far everything has gone very very well. I hope next week continues to build my confidence that it’s very doable for me to complete the Tevis.