For all you tack aficionados out there, this is the first in a series of tack posts. In future posts, I will present artillery tack in 2 parts: 1. the tack 2. the tack in action (hitching up the horses).

In CHAS I have 2 teams of teamster horses. The first (team 1) is Gunsmoke and Buttercup. They are EXPERTS at their job and have been a team together for probably longer than I’ve been on this earth. The tack below belongs to team 1. No matter what they are pulling – the breaking cart, wagon, ambulance etc., they will use this same set of tack. 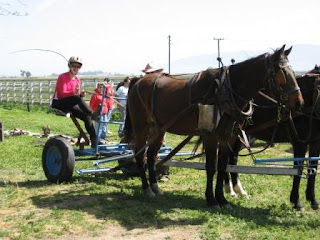 The second team (team 2) has gone through several revisions. Glenda, Brownie, and Bullet, have all tried out for the team. but just haven’t cut it. This year we are letting Griddlecakes and Gringo try out. They have a different set of tack.

Now, having said that, due to time constraints we used team 1’s tack on both teams this weekend. So, most of the pictures below are of team 2 in team 1’s tack….

Here is a view of the tack from the outside. Notice that it does not have the traditional breeching that hangs around the back of the horse. This harness has “Yankee britchn“. I like the Yankee style breeching better. It doesn’t seem to “grab” the horse as much when slowing down from….let’s just say…a hand gallop 🙂 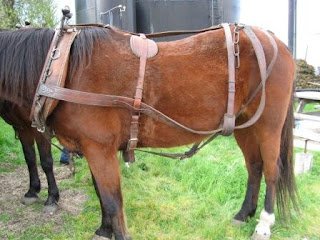 The tugs are held up by fasteners on the top of the rump until the horses are hitched up. The tug chains are what fasten to the wagon and is how the horse pulls the wagon. Notice how the tugs are connected to the collar in front. 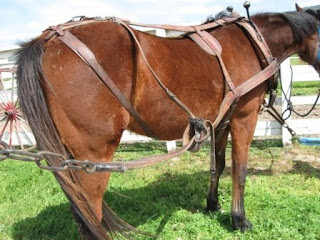 The picture above a the tugs taken down and in position. As you can see, when the horse moves forward, the tugs (which are attached to the cart) pull on the collar and the cart moves forward. with the horse stops, the pole on the cart (connected to the blue bar) continues to move forward. It hits the clip on the collar which pulls on the strap under the belly forward. As it moves forward it also pulls the strap on the flank forward, which pulls on leather that goes over the tail and the crupper. The cart stops.

The blue bar connects to the clip on the front of the collar of both horses. This is a “breaking” cart, meaning that in event of a runaway…theroretically…the bar will slip off of the pole. In a normal wagon the bar does not come off like this – it is attached to the pole.

A picture of the blue bar: 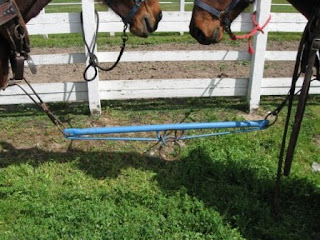 The pole of the breaking cart. The ring on the bar rests on the blue metal piece of this pole. The weight of the cart (it is very heavy) keeps it from coming off. 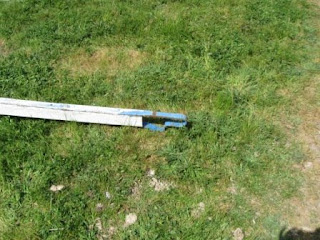 A picture of the tugs attached to the double tree at the rear of the cart. 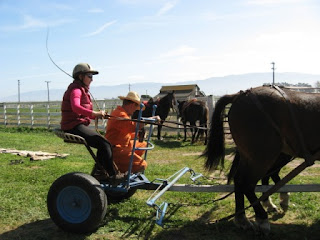 I hope you enjoyed a little tour of a set of harness! 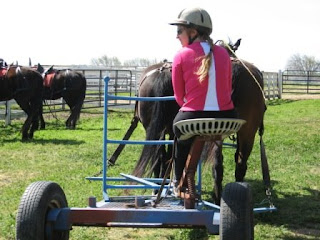