The weather held out and my boss agreed to my “work Saturday plan”, so Farley and I went off to Del Valle in Livermore on Thursday. I was out for either 2 or 2.5 hours, and did somewhere between 14 and 16 miles. My GPS batteries died half way through. You wouldn’t know by looking at the distance/time how much galloping we did (*sigh*). Hills, picture taking, some grazing, slowing down for other trail users, and me getting out of the saddle and running all took their toll. I wanted more miles, but I had to be back in town by 4pm for a work meeting. Making this meeting in semi-presentable condition was the only stipulation my boss made. 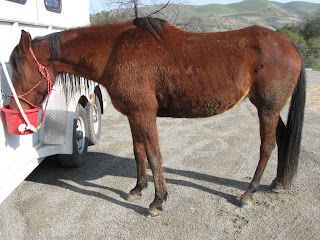 (Pictured – my poor dirty, horse. This is when I pulled her out of the pasture. No grooming yet!)
The weather was QUITE warm. I was in tights and a black t-shirt (short sleeved) and I was sweating. A novel experience coming out of winter. I did remember to put on sunscreen!

While I was at the parking lot, ready to head out, another rig pulled up. Before she even got out of her truck I knew she was an endurance rider. Who else is with horses at Del Valle on a weekday, by herself, with a VERY nice sundowner horse trailer? LOL. When she unloaded a clipped Arab my suspicions were confirmed. What’s nice about fellow endurance riders is that they understand the need to get out on the trail and put some miles in. There were a few moments of chitchat as we both tacked up, but no hard feelings when I took off a few minutes later. Some of the recreational riders I meet at the trail heads want to talk and talk and talk…..I always go out of my way to be friendly and courteous, but there are times I am torn between being a good endurance ambassador and wanting to get my miles in! **sob* I try to remind myself that in this life, it is the people I meet and whose lives I get to interact with that matters, and less about horses and endurance. 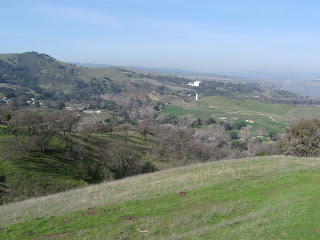 (Pictured: the view from the first big hill. The white spec at the middle left is my horse trailer)


I decided NOT to use the hackamore today. She was too wound up and there were a couple of school groups out on the trails (along with cows, usually occurring together…) I didn’t want to have any regrets. Farley has been out only a handful of times since Death Valley at the end of December. Additionally, I have been trying to put weight on her, so I had a feeling she would be a handful (increased calories + no work = energetic horse).

After 15 minutes of walk and very slow trot and felt like she needed to get some of her energy out of her system. The great thing about Del Valle is there are plenty of substantial hills. I pointed her at one and let her go. At one point I apologized to a photographer on the trail, thinking I had ruined his shot. It turns out I WAS his shot. LOL. 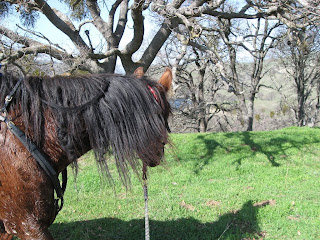 (Pictured – grazing break. Actually, this was in the middle of when I got off and “ran” so it was more of a Melinda break. Yes, I took the tangles out of her mane later!)

Does a horsey teenager grow up?
Have you ever ridden a “downhill horse”? And I’m not talking confirmation! Every horse has a strength and weakness. I can feel her get excited when a downhill comes into view. She can scoot down SO FAST. It so smooth, I just move from side to side a little. I don’t let her do it very often in conditioning rides because I believe it’s hard on the suspensories, tendons, ligaments etc. I do it just enough to keep her happy and in practice. On formal AERC rides I’ll let her do it, but only if the footing is good and the hill is not extremely steep. Today I let her do a couple of downhills to see how solid she was feeling.

She got EXTREMELY pissy when I tried to micro-manage her trail ride today. In many ways I have fostered this independent mentality on the trail. Her job is to pay attention to the trail and evaluate her footing. My job is to find the ribbons. I expect the horse to pick the best path down the trail. Riding all 4 days at Death Valley is where it clicked with her that SHE was responsible for where she put her feet. HOWEVER, I think she has forgotten that I will (at all times) have the power of VETO. If she suggests a trot and I insist on a walk, there will BE NO HEAD TOSSING OR BUCKING. If I NICELY ask for a reduction of speed in a gait….DO NOT SPEED UP as soon as rein pressure is released! AHHHH!!!!!!!
(Pictured: the trail. We usually ride on the single track, but the trail was damp and I didn’t want to destroy it, so today we took the “high road”.) 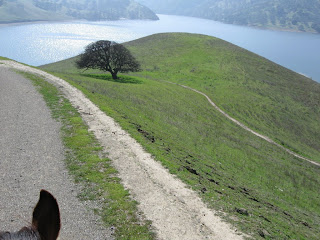 In the beginning of her endurance training she reminded me of a toddler. Cute, wanting to please, and craving affection. In the first few endurance rides she was so sweet – having fun, looking to me for reassurance and trying out new skills on the trail. At Death valley I felt her starting to grow up and now I feel like I have a teenager on my hands. Argumentative, opinionated, but not experienced enough to let go. However, she deserves some trust, so I’m trying to let her “go” more often. I’m moving up the distance as fast as possible because I want to do 100 milers. I have a feeling the more shorter distances I do, the faster and bull-headed she’s going to get.

I want to be a rider…not a passenger!
I tried to ride yesterday as if I was using a hackamore. Less hands and more seat/voice. I use my voice A LOT, probably to make up for me less than stellar seat and leg aids. In a bit, Minx likes a slight amount of contact on the reins – her background is sulky racing and this makes sense. Minx sees contact as a reassurance that I’m still there, taking care of her. Any contact at all just pisses Farley off. If I start riding in a hackamore I need to get used to NOT have contact on the reins. Not having contact makes me nervous. I feel like things can escalate very quickly out of my control. Adventures on Arabee (see blog in side bar) addressed the whole “loose rein with hackamore” thing in an early post. Hopefully she updates soon how that is going (any tricks?????).

I got off and ran for ~30 minutes in the middle of the ride. Actually – slowly jogged and walked – while panting. Farley was laughing. It felt good. I need to get off more often during rides. It’s so fun to watch Farley trot beside me. When I first started endurance I used to look at other people’s horses and the experienced horses had “that trot”. I don’t know how to describe “it”, but it’s a trot that only comes with miles on the trail. Farley finally has “that trot”.

As a special treat (as if finally being back in the saddle on the trail wasn’t good enough), I saw an osprey, immature golden eagle, AND an accipiter (probably a sharp-shinned) all circling together! I rarely see any of these 3 species (buteos and vultures are the most common) so it was special. I also saw a multitude of what I call “twitter” or “tweetie” birds. LOL. Lots of bluebirds, larks, and magpies. I find birdwatching so rewarding. 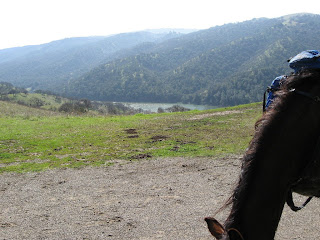 (Pictured: This is in the same location as the grazing photo above, but from the other side)


The end
My new equipment worked well. The new skito pad does NOT budge. I don’t think my new tights have as much grip, but they still were very comfy. I came VERY close to falling off. Farley was cantering/charging/galloping up a hill. Going up hill, the trail turned and the inside of the turn was banked. My weight ended up too far to the inside AND my girth was fairly loose. Farley started to do a little mini buck (mostly a little hop) because she wasn’t pleased where my weight was going and then stopped. Probably the closest I’ve come to falling off of her.

In general, the new truck’s transmission is much smarter than I am and I need to just let it do its job. The gearing and response in trailer mode is so much different from my half ton, how I brake, how I down shift etc. Here is how the conversation went today on the back-side of Altimont pass….
Mel: mmm….better let off the gas so when I build up momentum I can still slow down

Truck: (truck resumes a speed of 55mph, continues down the pass)

Mel: Well, I’m now going sixty and I think I’ll tap my breaks (the ½ ton would make a break for it at sixty and I would be going seventy-five before I knew it. However, continuous braking was asking for trouble, so after shifting down I would brake in short spurts)

Truck: You want to slow down? (shifts down a gear)

Mel: That was cool. And now for another little tap.

Truck: I exist to serve. Brakes = you want to slow down (shifts down ANOTHER gear).

Off to do laundry and pack for 20MT!