Home » Uncategorized » Weekend Part 3: A do it yourself project

Weekend Part 3: A do it yourself project

In exchange for the morning’s race (see part 2), Tristan spent his afternoon helping me wash and wax the truck and clean my trailer. 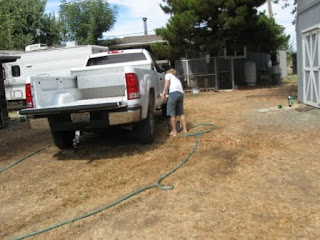 Much to Matt’s dismay, my truck is always dirty, and I must admit I’ve never waxed one of my vehicles. In fact, I think the last time I waxed a vehicle I was in the first grade and helping my Mom wax my Dad’s car as a welcome home present when he was in the Navy Reserves.

My trailer is dirtier than my truck. It’s usually organized – I’m too OCD to let that go to far – but to scrub with soap and water? Doesn’t happen. 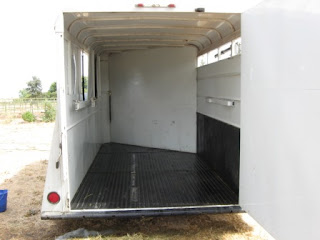 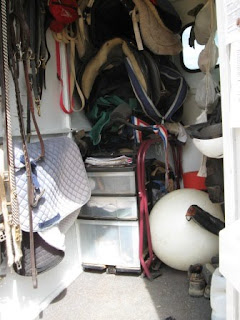 While Tristan was busy making my vehicles beautiful, I settled down with another project – repairing my trailer plug.

I knew the connections were corroded in the old one, and Matt had discovered (see Part 1) that the corrosion was causing the wires to pull out of the internal connections when I pried the plug out of my truck.

I do have some limited electrical experience (my very first presentation as a 4th grader in 4-H was how to “switch a switch” – how to change out a wall flip electrical switch) and this looked like a project just about my level.

Below are the supplies needed. A new plug, screw drivers, a pad with a pen. Needle nose pliers and a pair of wire cutters from my Dad’s shop completed the ensemble. I wanted a pair of wire strippers, but I couldn’t find a pair so I was going to have to strip the wires with the wire cutters. 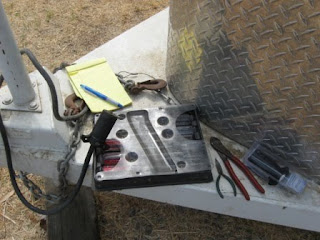 Here’s a close up of the old plug. You can see where the internal part is pulled away from the outer casing because of the pressure applied when I pull it out of the socket. There is so much corrosion in the plug, the truck “holds on to” the plug. 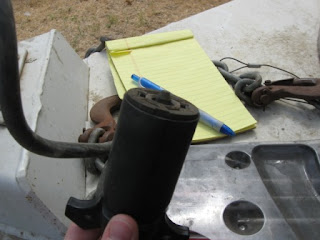 Here’s the outer casing removed. You can see that the white wire is not attached – a result of prying the plug out. Earlier on Saturday when Matt opened it up, the black and yellow wires were disconnected. 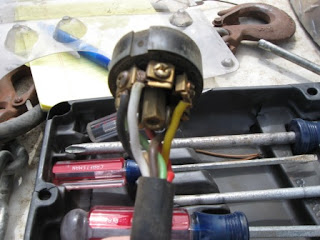 I took careful digital pictures of the wire arrangement in the plug. It’s VERY important to get it exactly right or your lights don’t work, your brakes don’t work and you may just fry all the wiring…..

Another picture showing the plug from another angle. (I was NOT going to get those wires in the wrong order!) 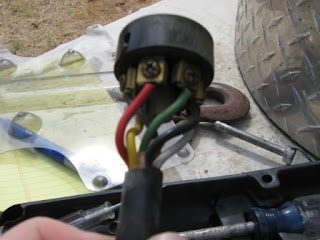 As another safeguard I also wrote the wire order down on the tablet. Another trick is to snip the wires off of the old plug instead of removing them from the connections, leaving a bit of the colored insulation on the wires. That way you have a physical representation of the colored wires in the old plug. 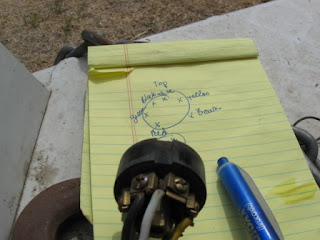 I have removed the wires. I’m cutting the wires down to the insulation and restripping them so brand new shiny wire goes into the new plug. 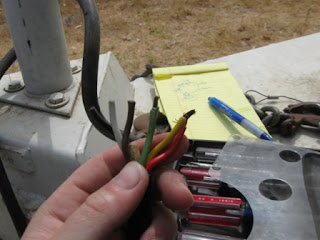 Here’s the new plug, fully assembled and ready to go. 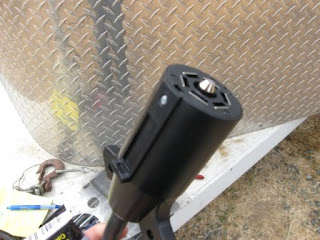 Looks pretty easy right? Take off wires from old plug and put on new plug. Make sure the order is correct, or at least the same as the old…….

I hooked up the trailer and tested everything. Voila! I had lights and brakes! I loaded up and off Farley and I went.
So there I was, merrily travelling down the interstate at 60 miles/hour. My truck was clean, waxed, and gleaming, my trailer was, if not exactly sparkling, as least resembled the factory white color it originally was. Of course, as it starts raining. That would be because I waxed. As I was contemplating the unfairness of it all, approximately 1 1/2 hours into the trip home, my truck suddenly shifted down 2 gears and I couldn’t accelerate. Fortunately (or maybe unfortunately? Hard to decide) I was in the middle of Stockton and could immediately take an off ramp. I was able to get to the side and then stop. Unfortunately it was the type of off ramp that I couldn’t get all the way off the shoulder. Great. And did I mention I’m in Stockton?
My first thought is that I’ve had a major (plural?) blowout and that’s what the resistance was from. I jump out of the truck and check the tires. There’s a funny smell and smoke coming from the trailer tires. My brakes. I jump back in my truck and try to move forward. Nope – the trailer brakes are completely locked. I unplug the brakes and lights and the vehicles roll forward as the pressure is released. I plug the lights/brakes back in. I climb in my truck and put into to drive. I was able to roll forward about a foot before the brakes look up again. I repeat unplugging and re-plugging and pulling forward about 3 times. It doesn’t matter what I do to the brake box in my truck, the brakes are going on full force anytime I try to pull forward.
Did I mention it’s raining?
And starting to get dark?
And I’m in Stockton?
Time for plan B. I pull out my trusty screwdrivers (yes, the same ones I staked the tent with at Tevis) and take apart the plug. Because my truck has a wiring diagram on the socket where the trailer plugs in, I theoretically know which wire is the brake wire. I pull it apart and disconnect the black wire. I stuff it backwards in the casing so it won’t short out any of the other wires, reassemble and plug it in. I get in the truck and voila! I can move forward.
So what the heck happened?
I’m not sure. It’s worked for 1.5 hours before malfunctioning. Was it the first rain of the season that caused a short? Did a wire get switched in the old plug and the error got transferred to the new plug? If that’s true, why did it work for 1.5 hours before shorting? Because I took pictures, I’m absolutely certain that the new plug is wired identically to the old one. If I did get the wires mixed up, then disconnecting the black wire to deactivate the brakes (the brake wire according to the wiring diagram) wouldn’t have worked because something else would have been miswired. I have an appointment to take the trailer in to an electrical shop to get it looked at after I return from vacation. I’ll let you’all know what I find out.
Here’s the teaching points (or how it could have been worse):
1. If I had been driving a 1/2 ton (like I did for 2 years), I’m not sure I could have gotten the trailer off the freeway. The resistance was so great, I would have slowed down too fast and I couldn’t have kept it going. Even my 3/4 ton was having some problems, and once stopped, my trailer was NOT going anywhere.
2. I carry tools in my truck. I was able to do a minor repair/diagnostic on the side of the road.
3. I was familiar with the basic principles of how my trailer worked. Since the brakes disengaged when it was unplugged, and since the deadman’s brake was not activated, I knew that the problem lay in the electrical for the brakes. Since the brakes were not activating when unplugged, I needed to figure out how to deactivate the brakes while still having lights.
4. I knew I could pull (and stop!) this trailer easily without brakes because I have a 3/4 ton. It would have been stop and go with my 1/2 ton. I could have stopped it eventually, but probably not quick enough in an emergency situation. With my 3/4 ton, with only one horse in the trailer, I don’t notice a braking distance difference between brakes and no brakes on the trailer.
5. I got to find out what happens if the brakes activate on the trailer at freeway speeds! You don’t automatically die! (I tend to have an overactive imagination…)

There’s my weekend story. Looking back, I don’t think I would have done anything different. Changing out a plug is a easy and simple task and is quicker and cheaper to do yourself. I pay others to change my oil, pack bearings etc so I DON’T take short cuts when it comes to the safety and wellbeing of my truck and trailer. However, this was one of those little tasks that just seems silly to pay someone else to do. I’ll be VERY interested to see what the issue was, especially because it worked for 1.5 hours!!!!!! And THEN decided to malfuntion!!!!! I’m very confused.

4 Responses to Weekend Part 3: A do it yourself project