Confessions of a Non-Horsey Person

I suppose the ratio of horsey people to non-horsey people in my family was about normal. I think my dad was somewhat of a horsey person, but my mom wasn’t. My two sisters were horsey people, but my brother and I weren’t. I definitely wasn’t. I didn’t dream, think, or fantasize about horses. I put them in the category of cows and sheep. Yes, you could ride horses, but didn’t Dad get up on Old Girl the milk cow and ride her one time?

Even though I wasn’t interested in horses, my Barbies were, so I appreciated that my older sister, Sharlene was a horsey person because that meant she had a big collection of plastic horses. Barbie liked Moonrunner the best. He wasn’t rearing or galloping with the wind tearing the ribbons out of his mane, like some of the other scary ones. He was black and mysterious; calm, but with an underlying power carved into his black plastic muscles. Barbie would leap onto his back to go and visit Ken, who was the main focus of the scenario.

And then, amongst the sisters’ collections of Black Beauty, Tall and Proud, Afraid to Ride, Billy and Blaze, Misty of Chincoteague, there appeared a stick of dynamite: The Black Stallion. I can’t remember what first made me curious, and then made me want to read it. Knowing my family, they probably were giving it a few consecutive reads, were buried in it, were going on about it, and had those waves of contentment flowing off them that comes when you’ve found a life-long literary character friend.

Sharlene had always been trying to involve any and all of her siblings and friends into her horsey passion, but had always struck a blank with me. A gleam shone in her eye.

“I don’t think you should read a book that’s this much about a horse unless you knew more about horses.” She paused. “It’s a really, really good book.”

Zing! The trout hit the fly! The next thing I knew, we had a schedule set for my horse lessons. We started with the parts of the horse. I learned what withers were. And fetlocks. My favorites were the chestnuts. They weren’t exactly cute, but the name was clever. I learned how to curry comb. We studied and learned the parts of the saddle. The only part I still remember from those lessons were the buttons, these little leather divots with pinked edges and strings hanging out. Maybe they reminded me of chestnuts. I vaguely remember even being on the back of the horse.

Surprisingly, I didn’t mind the lessons all that much. Maybe because they tied in to the prize, reading the wonderful book, The Black Stallion by Walter Farley. 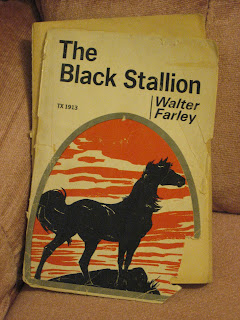 Alec was like you and me. He had freckles and was short. He had a brand new pocket knife that he hoped to use for something besides sharpening pencils and cleaning his fingernails. He was on a boat without his parents, just waiting for an adventure to happen. Everybody wants a special friend. To be your grandfather’s favorite kid, to be the little pal of the big boys, to have the teacher like you best, those give a child reassurance that they matter, that they are important. The Black Stallion was the ultimate special friend. No one else could go near him, or else the flinty hooves or the bared teeth would destroy the foolish presumer. He was very powerful, very beautiful, and unique. But Alec, by his own kind and loving efforts helped create the special bond they shared, which lasted all through the whole book series. Even if I wasn’t a horsey person, I could appreciate the themes of friendship, adventure, competition and fulfilling your dreams.

I’m still not a horsey person. But I think fondly back to that summer of horse lessons and The Black Stallion. I am glad to know more about horses that I would have, left to my own, and I’m grateful to have met Alec Ramsey and gone with him on some truly fantastic adventures.

8 Responses to Confessions of a Non-Horsey Person