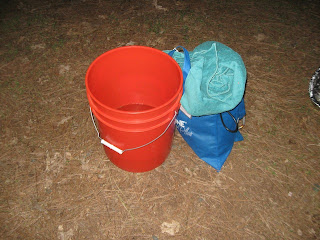 My hatred of showers not withstanding, there are times when the thought of a hot shower during the next vet check is THE only thing that keeps me going.

Both years I rode Tevis my mother set me up a shower tent at Foresthill. You can see the picture in this post here. Ever since that first shower at Tevis 2009 I’ve been OBSESSED with out to take a shower at the Dinner check of a 100 mile race. I literally feel like I’ve been given a new body and mind.

My mom’s shower was based on a 5 gallon bucket of warm water, a pitcher to pour water over your head, and a wooden stool to stand on so you aren’t in the mud. It was perfectly heavenly……but I had Cabelas member points begging to be spent, so I tried out a slightly more civilized method of taking a shower in the rough – the Zodi battery operated shower.

Pictured above is my shower “kit”. Everything fits inside of the 5 gallon bucket. The home depot orange buckets are just as good as black for soaking up the sunshine and making the water HOT.

Included in my shower kit is:

1. Small vial of shampoo – stays in the shower kit or I forget it. While rereading my 2009 Tevis story in preperation for a presentation I’m giving at a Rotary club tomorrow, I found the list of things I forgot at Tevis…..shampoo included.

2. Shower shoes – a pair of 2nd hand crocs. I’ve never had athletics foot or any other kind of fungus problem, and I don’t plan on having it either. Thrush looks and smells nasty on my horse and I have no desire for my very own, personal fungus problem. If they are in the kit, I have no excuse for not having them when I decide to take my shower kit into a public shower to use.

3. A towel and washcloth 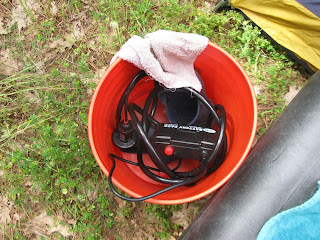 4. A Zodi battery operated shower – available at Cabelas here. Best 30 bucks I’ve ever spent. Trust me on this one. It POURS the water out the head with good pressure – no water saving hydrant here. I love it and everyone I’ve loaned it to loves it.

***TIP – store the batteries OUT of the Zodi to reduce the chance they will leak and ruin your awsome shower. Because you are dealing wtih moisture, this is a best practice, even though I haven’t had an issue. 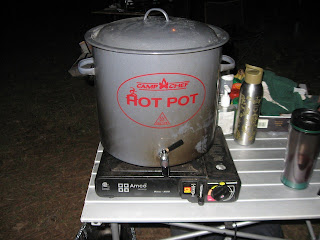 Above is a giant hot pot. It’s enameled and can be used over a camp stove or a camp fire. When I don’t have enough sunshine to heat my bucket of water, this is what i use to heat it up. Another option is to heat up smaller pots of water to boiling and mix cooler water into the bucket.

***TIP – if you are carrying the bucket with hot water some distance to your shower location and will have cold water available, put the near boiling water in the bucket, carry it to your destination, THEN put the cold water it in. That way you only lug 3 gallons of water instead of five.

Let’s assume you have assembled your kit, found hot water somewhere and have a bucket of water heated to perfection…..what are your shower options?

Your event or ride is at a fair grounds or other facility where there are public showers that may or may not have hot water, and may or may not require you to scrounge up quarters.

Carry your bucket, shower supplies, and shower into one of their stalls. Use their oh-so-conviently provided hooks for your towel and clothes and enjoy a hot shower in the privacy of your own shower stall.

***TIP – To conserve water, turn off the shower pump when soaping up, OR put the nozzle head back into the bucket so the water just circulates round and ’round until you are ready to pick up the head again.

Privacy consists of the back of your horse trailer

Set up near the back (closest to the big door where the water can drain out) of your horse trailer and set up as in solution 1. Even if there is stuff in the back of the trailer, there’s very little overspray since you have ultimate control over where the water goes with the handheld shower head.

***TIP – if you are using soap, and aren’t taking a shower in a facility with a drain, the responsible thing to do is to control and dispose of your soapy waste water properly, or buy biodegradable soap.

Set up a more permanent shower in the back of your horse trailer by installing an over head hook to hang the head onto.

If drainage is a problem, set up a muck bucket, or a shallow pan that will hold at least 4-5 gallons, and place a small plastic stool in it, to stand on (so you aren’t standing in your waste water). If you are using the shower head as hand held, you will have less overspray, if you are using the solution 2b, plan on using a container that has a larger diameter.

Because the water is so controllable, it’s very doable to take a shower anywhere you can hang a sheet or two for privacy. I can hang fabric in a small area on one corner of my Walmart brand easy up (BTW – it’s into its 3rd or 4th season. GREAT investment, especially now that you can get replacement covers for 1/3 of the price of a new one), stand on my stool inside of a feedpan to control mud, and take a shower in the middle of camp.

***TIP – I recommend NOT using light if taking a shower at night in this set up…..Otherwise you could be providing the camp with a very entertaining shadow show…… 🙂

***TIP – Everyone who has used my shower has averaged 2.5-3.5 gallons of water – both with long and short hair.