Home » Uncategorized » I get brought down….

I get brought down…. 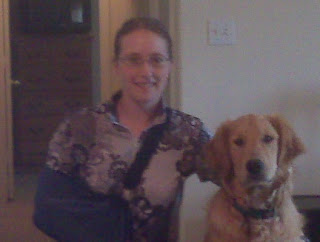 …by a golden retriever.

Yep. A fractured radius later, I can officially say I’m getting old.

Doing sprints on the track. Reed decides he’d rather be with me than
matt and runs toward me. matt is calling him thus my plan was to
totally ignore reed and continue running. Thus a 70 pound dog hit my
legs perpindicular to my direction of travel. What ensued was a bit
like a cartoon character-a cloud of dust, tangle of legs in the air
and me crying on the track UNABLE to get up. Did I mention I was
sprinting with the OTHER 70 pound dog? May have complicated things.

My (already broken) tail bone and (already twisted) pelvis took most
of the brunt ( no worries, I draw the line at posting butt hemotomas
pics online – I think), but not before my right arm got into the action.

I’m lucky-it’s in the elbow and I’m fortunate I probably wont have to
do surgery. Reed is 9 months old and up until this point has had
perfect recall and off leash manners, however I don’t think me and
matt have ever worked him off leash while we were doing totally
seperate things. Poor guy. Both dogs stayed with me in a down stay
until matt got to me.

How ironic that it isn’t a horse that gets me but Mr. Prozac puppy –
“the wellbehaved one”?

FYI I should start a list of impossible things to do onehanded with
your left hand if you are right handed.

1. Put in contacts
2. Put hair up in a pony tail (matt got to do this for the pic)
3. Take tight pants on and off
4. Tie shoelaces
5. Operate zippers

13 Responses to I get brought down….