A fire and lessons learned 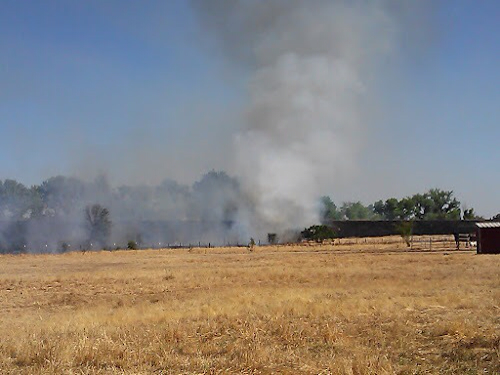 I’ve been out of town on a field trial for a few days with sketchy internet connection, so haven’t gotten posts up as timely as I would like. To make it up to you, my dear Reader, I’ve posted TWO full length posts. Go on over to Tess’s Blog at underbakedbrit.blogspot.com and check it out the merits of nicknames and double spacing. It’s both dog and horse related, but since Tess’s blog has been sadly neglected over the last couple of months, I showed it some love this morning.

These posts will go up at Starbucks this morning – this is one of the more comfy field work jobs I’ve had!!!!! (update – this so didnt happen…..its now thursday morning). I’ve yet to be cold, wet, or muddy and I get to go to Starbucks for coffee and breakfast. Ah yes. The hard life of being a researcher. Although I think the insomnia has resolved itself (not my facebook friend? I didn’t sleep for approximately 2 weeks) for some reason I’m still waking up around 4:30 or so and I’ve decided that if my body wants to be up then, it’s close enough to 5am to be civilized and a great time for writing blog posts. And I bet that after 12 hours in the field and a 4 hour drive home I WILL go to sleep tonight.

A couple of days ago (Friday to be exact) there was a “small” grass fire where my parents live, the result of the levee controlled burn being not so controlled. The word “small” is in quotes, because although it did NOT feature raging walls of flame racing across the landscape at 60+mph, ANY uncontrolled fire moving across fields of dry, mostly short (thank goodness) grass towards animals and homes is a significant fire in my mind.

After seeing a fire truck race down the private, gravel, mostly unmarked, deadend road that my parents and 3 other people live on, my mom, dad, and I raced to the back corner of the property to see what was going on.

Most of the parcels in the area are 5 acre lots, with wire fencing. There’s various horses and goats and chickens, and an old, picturesque barn. We watched as more and more fire trucks arrived, a water truck, and various cops, Cal state fire, and other official vehicles. I was worried about the 2 horses and 2 goats that were in adjoining pastures, both of which were steadily burning at the back, sometimes flaring up as it hit various weeds that hadn’t been mowed. The animals weren’t in any immediate danger since the front area they were in was mostly bare dirt, and the dried pasture was short. However, none of the owners seemed to be home.

Lesson #1: Do your weed control, it buys you and your animals time.

Lesson #2: The Disaster that puts your horses and other animals in danger can happen when you are not home, and won’t necessarily be reported on the news.

My dad advised waiting to act since the horses weren’t in immediate danger and didn’t appear to be overtly stressed.

Then a fire truck arrived from the other side and cut through a wire fence, took out a T-post, and proceeded to a in-line gate between two pastures, and left the gate open as they drove across the field.

Lesson: Emergency crews will go through a gate if they can on a fence line. Not a bad idea if you don’t want your fence cut. ( I can’t keep track of my numbering so no more numbering the lessons!)

That was the last straw for me. Leaving the gate open left the horse in that pasture with direct access to the near by busy high way (could leave through the gate into the next pasture, through the cut fence and then onto the road) was too big of a risk, and I kept thinking what I would want if that was Farley in that pasture. I jumped my parents fence and headed over to the open gate to stand guard. (Didn’t close it because I didn’t know whether the fire vehicles needed continued, quick access to that exit.

Then I watched as the firemen cut another wire fence in order to get direct access to the fire, that allowed the 2 pastures with 2 horses access to each other. 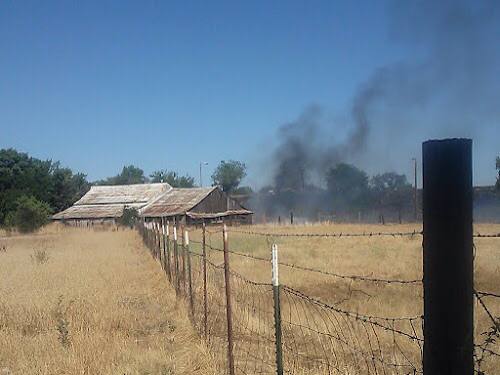 Great – just what we needed. Two unfamiliar horses with varying degrees of unknown catchability now getting acquainted with one another and getting even MORE worked up.

The big draft cross wearing a halter tried to run me over and I decided to go check out the other horse.

Lesson: the kind strangers that will try to help are going to go to the friendly, respectful horses first….

She was a sweet mare that was a little nervous about all the commotion but leg me slip my arms around her neck with a little sweet talk and seemed amiable to being led.

So I asked Dad for his. To his credit he gave me just one unreadable look and then gave it to me and went around hitching his shorts up with one hand.

The mare led into the other horse’s pasture and I put her into the roundpen, Since there was nothing to tie her to in her pasture, or a paddock to put her into.

Lesson: Always have secondary containment that the horse can be put into if the fence is cut.

The two horses in relative safety, the fire mostly under control, and still no owner in sight, I started looking for leadropes.

I know it’s controversial to keep halters and leadropes near pastured horses because of theft etc, but in this case, the pasture was in the back of the property with no direct access to the road. Don’t count on friendly strangers having leadropes, twine (or a belt). The the horse was wearing a halter, and with some poking around in the hay barn that was near the pasture (all while praying the so-far-not-to-be-seen neighbor’s dogs didn’t come around the corner, see me, and eat me) I found 2 leadropes, a bucket, and a barrel of some sort of grain. Jackpot!!!!!!

Dad took control of Mr. Run-Me-Over-Gelding and I hung the second lead rope around my neck in case we needed to lead the mare out of this pasture as well.

Lesson: Even if you don’t want to risk having halters around, try to keep leadropes or something in a place that makes sense with a little poking around, in case someone has to rescue your horse when you aren’t there.

Now with the most important animals taken care of I turned my attention to the goats (sorry goat people….). I shook the bucket of grain, and I’m not sure they could have cared less. I shrugged my shoulders and figured they would stay with the horses.

The fire is over, the trucks have gone, and we are left with 2 horses, 3 goats, and a cut fence with coils of barbed wire on the ground.

Lesson: Gates between adjoining pastures along a long fence isn’t a bad idea. Lock them if need be for security, but it solves the problem of trying to put humptey dumptey back together again after something like this.

In the end everything was OK – the fire was controlled quickly, the animals relatively easy to handle and didn’t get burnt into horsey potato chips.

So why am I going through the incidence in painstaking detail and boring you, my dear Reader, with this? Because learning from close calls are what saves you when the real thing happens. Because although I have thought about what I would do with Farley and the animals if I was home and disaster struck, the people that save your animals are sometimes strangers, not family and friends. The need for security and protection of theft always has to be weighed against the need to have equipment like halters and leadropes accessible to others during an emergency, but I think common sense can provide a happy median.

A stranger is probably going to try and do the right thing by your horses if they can, increase your chances of that happening by considering some of the lessons I learned above.

7 Responses to A fire and lessons learned