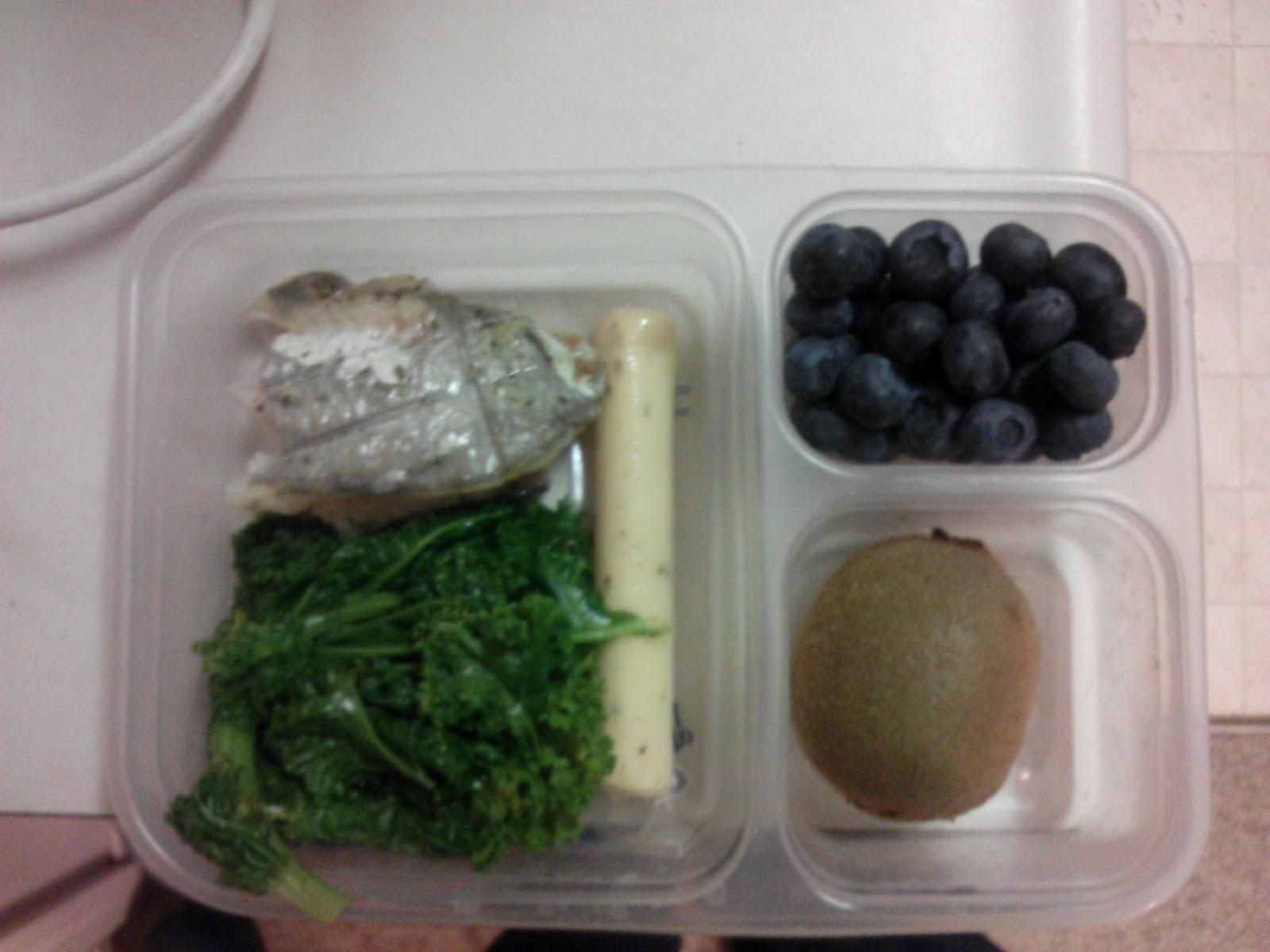 Once again the picture doesn’t do it justice….sigh.  I’m just too impatient to deal with the correct lighting and backgrounds.  After all these posts go up because I don’t have the time to do a real post!

I should mention that I’m VERY lucky and live in California where fresh produce is both easy to find and relatively cheap.  My food bill is one of the cheapest bills I have, yet I look at my lunch pictures and wonder whether that’s true across much of the country.

This lunch contains:
-blueberries
-a kiwi
-string cheese
-Kale sauteed in butter with salt and pepper (OMG my first experience cooking Kale and the reason there isn’t more in this box is because almost ate it all as it came out of the skillet)
-white fish that I smeared pesto on, and then cooked in my tabletop rotissouri.  (pretty sure that isn’t how you spell it, but I curiously like how it looks like “Missouri”, so we will go with it.

This is a lighter lunch than usual, not much above 300 calories, so I threw in a pouch of applesauce (I like the ones with the twist off containers because I can eat them in class or while riding a bike) and a seseme/nut bar I got as a treat at the grocery store.  I have an exam tomorrow and I know if I don’t pack some extra “goodies” I’ll be tempted to get a milk shake or something else that will make me feel dreadful after I eat it on the way home.

Endurance ride potential?  Except for the string cheese and kiwi, probably not.  I don’t like cold fish, or cooked veggies that are cold.  The blueberries might be OK, but in summary that leaves me with a distinct lack of protein and an overload on milk and fruit based sugars, especially combined with the apple sauce and sweetened bar.  A peeled kiwi seems somehow very palatable for ride day…..mmmmm…..

BTW – another reason I’m posting this relates to my very-soon-to-be-completed-post on rider fittness.  Eating boxes like these was an integral part of me losing almost 10 pounds this summer and how I got fitter in less time than ever WITHOUT INJURY.  So yes, what you have for lunch affects YOU as an endurance rider.