Thus, it is one of life’s cruelest jokes that you put me in at a ride and food becomes an impossibility.

None of these were successful strategies…and then things only got more complicated when I realized I couldn’t eat gluten AND I couldn’t eat carbohydrates on their own without some sort of fat or protein.

1. I was near the end of a 100 when I realized the intense calf cramping I was getting at the end of rides was most likely electrolyte related…..not an indication that I wasn’t muscular strong enough. (well duh!  muscle soreness doesn’t usually manifest itself as a intense cramp with so much pain you want to fall off your horse…).

2. After I learned that a reasonable refuel target rate is about 250 calories per hour I made up ziplock baggies of foods that were a mix of protein/fat/carbs that were worth 1 or 2 hours worth of calories for an LD.  Then, I made myself eat a baggie every hour. The actual food I chose needed work, but the schedule and portions worked – for the first time I actually felt hungry during the ride and didn’t feel awful. Lesson learned: portions and schedules work.

Since how and what I’m able to eat during rides is a moving target, I think it’s useful to revisit where I am on the subject once in a while in case it gives someone else who is struggling with the same thing ideas (and provide me a list of foods to pack when I’m rushing around for my next ride!).

At the beginning of the 2014 season, here’s where I am with food during rides:

I think of my food in 3 categories: In the saddle, snacks, meals

Snacks are small things that I can get down 98% of the time even if I’m not hungry, and are likely to stimulate my hunger. These are the first things I go for at a vet check and I should consider carrying with me on a ride like Tevis where I go long periods of time without seeing my crew/crew bag. You’ll notice that a lot of these foods are carb based, which is fine because hopefully I’ll be able to flood my system with protein to minimize blood sugar impacts during the rest of the vet check.

Traditionally this is my worst part of eating.  Again, I try to choose foods that I absolutely adore in real life so that there is a chance it will look appealing at the ride. Eggs are NOT my favorite thing in the world, but I eat a lot of them IRL, and they continue to go down suprisingly well during rides.  I need another magical food like eggs….

Pasta (rice noodles with sauce!!! and maybe some italian sausage mixed in there)

Pizza on gluten free crust (I can dream)

Steak (this could be hit and miss. Sometimes I want it, sometimes I don’t).

Paleokit (traditionally jerky does NOT work for me, but I wonder whether integrating it as part of the vet check meal instead of trying to do it on the trail would work better).

If someone is cooking, some version of fried or scrambled eggs. With lots of salt.

***Edited 3/3/14 to add: Freeze dried meals – I just remembered something that worked really well for me at Cache Creek ride last year.  A freeze dried backpacking dinner the night before!  My problems with eating start the night before and I managed to get the whole thing down which was a huge amount of calories and salt etc. If I had boiling water available, I could probably make this work for lunch and dinner for the ride too. There are some brands that are more “real” food than others, and definitely pre-try varieties – there are some that are much better than others!

3/3/14 edit: Hot cereal – I used to be able to eat instant oatmeal at rides but I had some issues with oatmeal at home and so haven’t gotten up the nerve to do it at a ride since. However, there are some alternative hot cereals that are wheat free and non-oatmeal I’ve been interested in trying. I’ve actually be thinking of trying to put together a “rice pudding but more like cereal” sort of dish, if I could find a way to put enough protein in it so it’s just not more simple carbs.

3/3/14 edit: Listen up future crew members. I’m putting in my In-and-out order now.  I’ve never actually done a 100 where anything like this was possible, but here it is. I want a….protein style double double with onions.  Maybe ketchup and mustard substituted for sauce – I’m not sure. And fries.

The point of the saddle food is to keep my “system” working well enough that I can eat food at vetchecks and keep it down. Here’s a picture of most of my saddle food. Has to survive saddle bags, being opened with one hand and cause a minimum of messy trash. 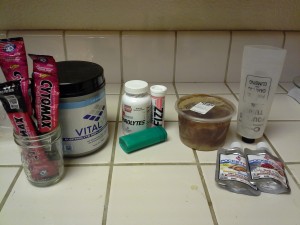 Vitalyte – Most of the time I drink just water on the trail, but sometimes I just want something more. I listen to what I want and adjust accordingly. I usually mix at 4 scoops per 1.5 liters instead of the 4 scoops per liter as recommended. If I’m not drinking this on the trail, I usually drink at least a couple of cups of it at the vet check.

Hammer electrolyte capsules – more available in my area than the S!caps and basically the same thing. I take these every 30-60min religiously out on the trail. They are what have finally stopped the cramping. Do you see the little green container that is by the bottle of capsules? That is a mento gum container that i have repurposed to carry the number of capsules I need on the trail. It’s light, opens with one hand and the capsules can be tossed in my mouth easily.

Fizz – the fizz container is by the electrolyte capsules because supposedly it’s the same formulation as the capsules except it’s in a flavored tab that can be dropped into water and it makes it a little fizzy and a little flavored. I had some at my last running race and liked it well enough to buy it. I’m not sure how it’s going to fit into my routine yet. A treat in a water bottle on the trail?

Cytomax – this is a fancy electrolyte that’s very sweet and has some amino acids in it. I don’t buy it in the big container – just in the single serving packets – because I don’t go through very much of it. However, there’s been a handful of times, usually near the end of a ride, or after I’m done with a ride/race where I’m craving SOMETHING. And that something isn’t the in the food I’ve brought, or a regular electrolyte. And when I’ve drank a serving or two of the cytomax it satisfies that craving.  I’m inclined to believe it’s the amino acids since I usually use it when I don’t have a good protein source on hand. This is purely ancedotal…..but it’s worked enough times for me that I keep a couple packets around in case I need that pick me up at some point.

“Goop” – Almond butter/nutella – that little clear container is full of bulk ground almond butter and nutella. I buy the self ground almond butter because it’s a little coarser than the stuff you get in the jar and so has a texture beyond smooth and gummy.  This is the mainstay of my calories in the saddle. I pack a tube (pictured to the right of the tub of goop) and then suck a mouthful out of it hourly or more often. It’s enough calories to keep my system going and I actually find myself getting hungry when the hour rolls around and it’s time for another mouthful. One ounce = one good mouthful = ~2 tablespoons = ~200 calories.

PocketFuel – What about those little foil packets laying on the counter? Those are my new experiment. PocketFuel is an almond butter based whole food energy “Gu” that has flavors beyond the typically nut – chocolate. So, I’m going to see if they agree with me and if they do, they might work out as an alternative when I’m too lazy to mix my goop, or if I get sick of it, or just need a change. PocketFuel is sold in the small 1.8 oz servings (has about the number of calories I need for one hour) or in bigger packets meant to refill smaller container. The foil packets have a twist off plastic cap which makes it easy to suck out the contents and keeps the trash neat in my saddle bags. I find it really difficult eat stuff out of the tear off foil packets – it irritates the corners of my mouth.

3/3/14 edit: Luna Bars – I won’t lie. They aren’t my favorite thing to eat in the saddle. And the various “drizzles” on the outside semi melt into the wrapper and creates a messy wrapper trash in my saddle bags. But, they are one of a very short list of “energy bars” that doesn’t taste like pure chemicals when it’s hot and I’m not feeling well, and I can still chew it if it’s super cold outside.

3/3/14 edit: Nature Valley’s granola bars. The original ones!  I break them into pieces in the wrapper BEFORE opening the packet so they are in bite sized chunks.  The oats haven’t bothered me – even though I’ve had to quite eating oatmeal because of GI issues.  *crossed fingers*.

That’s it folks!  Hopefully there’s a jewel in there someone for you and we will revisit after my next ride.