Remember when I told you that I did “accidental” intervals on Farley and that’s how we train for endurance now?

Today’s ride was the perfect example and because I rode with my phone, I’m able to show you what I’m talking about.

Today I didn’t go out with the intention of doing intervals – I decided to do our “short loop” and we warmed up to our regular spot, did some trotting, walked up the levee embankment and down the other side. Then took off a little faster and she’s been giving me a lovely canter lately so off we went chasing the white dog down the trail.  We rounded the corner and took off a little faster and I let Farley edge out the little white dog (usually the rule is that Tess gets to run in front and “win”) and then it was back to a walk to navigate a bit of technical rock/gravel/hill stuff. And then it’s a straight shot towards home through a wide dirt orchard path and we went faster and faster and FASTER until I was going as fast as I’ve EVER let her go, but she was being good and Tess, although not in front in any more, was TOTALLY game and keeping up on our heels – and we were going so fast that I was trying to decide whether I should let Farley REALLY go – no time like the present right? – …..or should I come to my senses and stop going hell bent for home in jeans, crocs, and dressage length (long) stirrups?

And then a tractor pulled out in front of me on the orchard road and after slowing to a trot to pass the moment of insanity had passed and we went home at a more sedate pace.

And voila!  What shows up on my pace chart looks remarkably like an interval workout. Periods of faster work interspersed with really slow speed recoveries.  99% of my rides look like this – and I’ll do any where from 3-15 miles at a time.  Sometimes I go really fast, sometimes I go really slow, and sometimes I’ll do longer stretches of something in between.  Very very rarely will a keep a consistent pace through an entire ride. I feel like this mimics endurance rides too. Often on a technical ride I’m making time where the footing is good, and then walking through the really steep stuff, or the crappy footing.  Sure, during a real ride I do much longer stretches of that 9-10 mph trot, but what I’m doing in training seems to prepare my horse just fine – and changing up the paces and speed during training keeps the conditioning rides fun for me and my horse.

This is what a dog looks like after she’s raced an arab and lost: 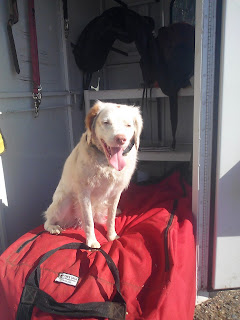 After putting Farley up I couldn’t find Tess….until I looked in my tack room.  She had crawled in and snuggled into the cushy bale bag. Unfortunatley she got up before I could take the picture :(.

She is currently zonked out in her kennel and I can only hope this means I don’t have to deal with “bored puppy syndrome” tonight.  🙂