On Tuesday I noticed that one of Farley’s eyes was producing some excess tear. Nothing too major, and in fact I forgot about it by the time I left the stable.

On Wednesday I was bored.

I drove to the stable, without my cell phone and a dog that was VERY excited to go along on a trail ride to go on a pony ride.

And….and greeted by a Farley whose left eye looked much worse than the day before.

So of course I had to BACK home to get my phone and call the vet, try to explain to the dog why we WEREN’T going on a ride, and change out of my riding tights.

In addition to even more tear production, Farley also was squinting, blinking, and standing so that her left side was away from me.  Even though I couldn’t see any foreign bodies in the eye or any obvious signs of trauma just the change from Tuesday to Wednesday was enough to make me pick up the phone and call my vet.

Eye stuff is NOT something you want to wait on or mess around with. I’m not a fan of going to vet for every bump and scrape – especially if the injury isn’t sustained during an athletic effort. But a worsening eye over a 24 hour period is a major red flag.

As I made the vet appointment I did wonder whether I was overreacting – At that point I hadn’t tried to take pictures and was in a rush to get home and call the vet before they closed for the day and so in my memory, standing in the kitchen Farley didn’t seem THAT bad – the only thing really noticeable was the increased tears and increased heat.

When I went back out to the stable to feed, I tried to take some pictures and THAT’S when I realized that Farley was indeed showing more clinical signs than I had realized.

The normal side? No problems snapping a picture of the eye while it was open.  The inflammed side kept closing and squinting every time I brought the camera out and clicked the shutter. And I had trouble getting her to face me evenly with both eyes – something I didn’t notice before trying to take pictures.

I wouldn’t have thought that taking a picture could make something show up SO MUCH BETTER – most of the time I feel like everything looks so much worse in real life than it does on a photo. 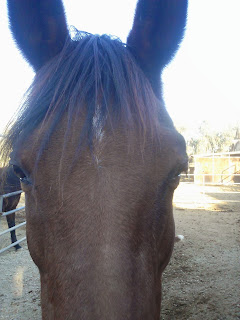 Seriously folks – in real life you couldn’t see the difference between the left and the right other than an increase in moistness around the left eye – she wasn’t holding it half shut. It was just blinking a lot more, and since the camera was a foreign object maybe she felt she needed to protect her injury against it? 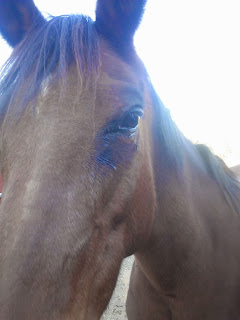 This is what I noticed first – the increased tearing. 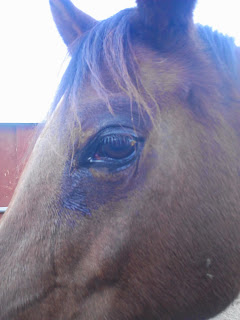 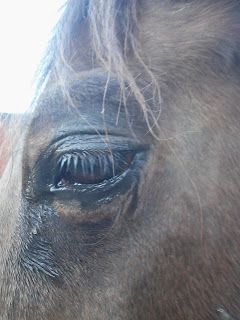 An example of taking a photo of the normal side – I did this just to remind myself that NORMALLY a horse eye doesn’t close every time a picture is snapped! 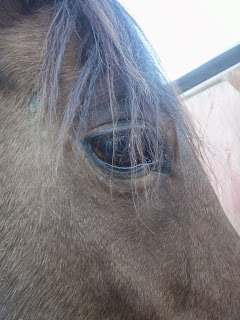 I got quite a couple like this – I would hit the shutter and she would blink. 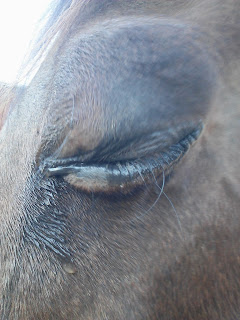 I’m not going to expound on why delaying treatment of an eye is bad – that’s information you can get on any google search.  However, I AM going to get on my soap box and tell you why you should self treat eyes that look like this with CAUTION.

My top two differentials for Farley were:

1. Corneal ulcer – uncomplicated, probably not full thickness since I couldn’t visualize anything grossly (but you never know….)

2. Inflammation without an ulcer (Uveitis).

Either one was a possibility.

A corneal ulcer is basically a scratch on the eyeball globe. The more minor (not full thickness) uncomplicated ones that get treatment heal in about a week and it’s all about preventing secondary infection and keeping that nice uncomplicated ulcer from getting complicated.

Think of uveitis as a fancy name for “inflammed eyeball” (and yes, I know that uveitis specifically refers to inflammation of the uvea…..but I’m not teaching an ophtho class, I’m trying to explain a certain point….). Uveitis (specifically anterior uveuitis) can occur secondary to something like an ulcer or something else that is pissing off the eyeball…..or in horses, because horses are the definition are THE most fragile animals in the universe……they can get this condition called Equine Recurrent Uveitis (ERU). The most popular theory is that ERU is an autoimmune disease. ERU is a major cause of blindness in horses.

In both conditions we have inflammation.

In one condition we have a traumatic injury (could be very very tiny) that will heal nicely as long as a secondary infection doesn’t occur – which requires a nice strong immune system to fight off any nasty intruders.

In the other condition we have a potentially overactive immune system that might need to be toned down a bit.

Are you starting to see why the treatment for each condition, although they may look almost identical, are going to be treated completely differently?

Corticosteroids are IMMUNE SUPPRESSORS. They are ABSOLUTELY CONTRAINDICATED when a corneal ulcer is present. They are really helpful when you are trying to calm down an over active immune response that is causing uveitis.

My Dear Reader should know by now that I’m actually in favor of having horse people have access to drugs to treat their own horses, and with a few simple rules and some education, I think most of us can use bute, banamine, surpass etc quite effectively and without harm to our horses (I also don’t think preventative products like flea and tick control and heartworm meds etc should be prescription but that’s a topic for another post – the point is, I think that pet owners – and especially large animal owners – are fairly responsible people who can use medications properly if given some guidelines).

HOWEVER, I do NOT feel that corticosteroids fall into the category of medications I would be comfortable with a layperson administrating without some direction of a medical professional.

So far in my limited experience, corticosteroids seem to be administered incorrectly more often than not – for example: to an animal that is attempting to fight off an infection (or will be fighting an infection because of a wound).   Why would you want to suppress the immune system in this circumstance? The anti-inflammatory properties of corticosteroids are powerful and absolutely indicated in some circumstances, but if you aren’t sure whether exactly what is going on, corticosteroids probably aren’t the answer.

Unless you are in the habit of administering corticosteroids systemically to your horse that you think isn’t doing quite right (and I don’t think that describes most of us), treating EYES is the most likely situation I can think of that the average horse owner might give a corticosteroid when you shouldn’t have.

In addition to the eye looking very similar for both conditions, the eye medications themselves look really similar! The triple antibiotic that does NOT contain a corticosteroid that your vet may have prescribed when your horse was seen for a corneal ulcer looks almost identical to the triple antibiotic that DOES contain a corticosteroid, that was probably prescribed when your horse had uveitis but no ulcer.

In class we were told to be very very careful because even vets make this mistake. It’s easy to hand the wrong med to the client out of the pharmacy because all the boxes and the products look really similar. 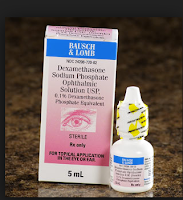 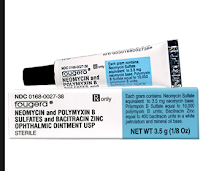 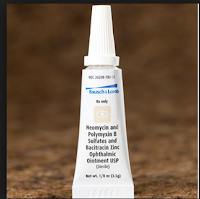 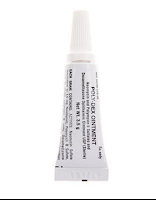 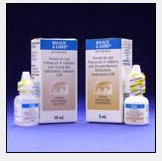 In the end, Farley was diagnosed with uveitis WITHOUT an ulcer and I was sent home with an ointment that contains a corticosteroid.

Now that Farley has a history of a uveitis episode without an ulcer, I will be more comfortable treating a future apparent inflammed eye without a vet visit, as long as I’m REALLY confident that I don’t see an ulcer (and knowing that if I missed a really tiny ulcer, I just made it worse by using that ointment – and deciding whether it’s worth taking that risk).

In summary:
– KNOW what medication you have from the last time. Does it have a corticosteroid?
– REALIZE there are 2 conditions that are very common that can be hard to differentiate that need completely different medications.
– CONSIDER the risk that you are taking if you decide to self diagnose and medicate. It may or may not be worth the risk. It may or may not be the same thing that you had *last* time.
– There are a lot of things we do as horse owners that might help – and at the very least probably don’t make it worse. Ophthalmic stuff doesn’t fall into that category…..you can really screw it up by giving the wrong thing.

6 Responses to Eye spy a problem