Camping tips to be ignored – II

Tip: being prepared is overrated (the more you know the less you need right?)

On the evening of the first night, I decided to go out at dusk and get some additional mileage. Michele decided to go out with me, as she had to turn back earlier in the day due to Stashi’s naughty behavior, and hadn’t gotten a ride in earlier. (more on that later)
I blame our mis-interpretation of the above phrase (is it the LESS you know, the LESS you need? I can’t quite remember….) on the fact that the decision to go out and ride was made after afternoon refreshments. We left at dusk with no maps, no headlamps, and no water, with some vague impression that we would be out for about 1 1/2 hours.
Yep. Between the 2 of us, we probably have more years in school than anyone should have to admit to, and that’s exactly how it went down.
The first half of the ride was spent PROMISING each other that we would turn back at 8pm sharp if it wasn’t obvious that the trail we were on made a loop back to camp. In reality? Neither one of us was planning on doing any repeat trail and it was FORWARD ON!
At 8pm we decided on the following truths
1. Our horses, both experienced endurance horses, one of which probably remembered this trail from years ago, both were acting like the trail went back to camp. Thus it HAD to be a loop right?
2. The mapmyrun app on my phone CLEARLY showed that we had come in a “C” shape from camp and thus most likely we were half way back to camp since the trail mostly likely made another “C” on it’s way to camp the other direction, thus making a complete circle. (I know, sitting here reading this, it doesn’t make any sense to me either….).
3. The trail was very nicely groomed with great footing – soft dirt with some rocks. There’s a 50 on this trail in another 2 weeks and someone had obviously been putting in some work – and so it was definitely rideable at night.
4. Nothing had gone after my dog food sitting on the picnic table that day, so it was unlikely anything was going to eat us (dog food is much tastier than human with a side of equine right?)
5. Riding at night is fun.
6. There was a full moon. Theoritically. In fact, I got to enjoy it at 4:30a that night from my sleeping bag –> meaning it was NOT illuminating the trail when I was actually ON the trail. But that was a small detail that I immediately banished from my mind as soon as it surfaced – the truth that the lovely moon was not going to show it’s face did not make it onto the acknowledged “truths” list……
With these 6 things in mind it was onward and forward!
We periodically checked our direction and progress by screaming at the horses “where’s camp!!!!!!” while throwing the reins at them and observing their willingness to gallop in the direction we were heading.
And yes, there WAS a loop. A nice little 8 mile loop. We did much of it again the next morning, and it wasn’t nearly as exciting – I guess actually KNOWING where you are, and being able to SEE your trail markers, and not having to make decisions based on the sum of an amorphous mapmyrun route and attitude of your mount just take some of the fun out of it…..
Tip: Apparently wild pigs won’t evicerate your horse and revel in your still warm blood as matter of course 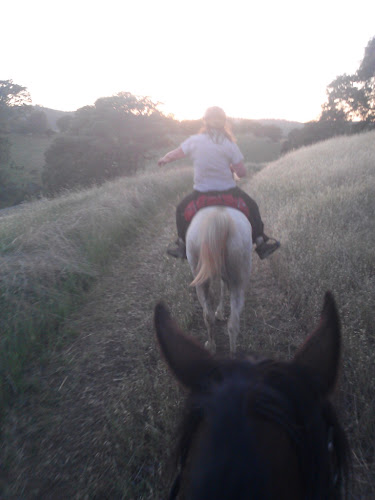 I am not fond pigs. Their squinty little eyes, their big ‘ole teeth, and their oh so cuddly (NOT) personalities. For those of you that have pet pigs – I’m sorry, I just don’t understand. When talking about medicating pigs we talk about the effectiveness of pig medications based on giving them in the “IP” route. Now, you small rodent people may think that IP stands for intraperitonium. On the Contrary!!!! It stands for “intra-pig”. Thus my piggy drug protocols are based on whether the medication is potent enough that the dose needed is small enough that it fits into my long range sticker thingy and still be able to put that porker into some reasonable state of immobility.
I am even LESS fond of wild pigs. Mostly because there’s not usually a pig proof (if there’s even such a thing….) fence between me and it.
Now Michele apparently is WILD about pigs. Especially the wild ones. I found this out when I pointed out a “sow” (sounder?) running down the hill with a ton of little piglets, and Michele took off at a dead run screaming her head off, calling to the piggy’s in some secret piggie language.
To my horror the sow(nder?) switched direction and started heading UP the hill towards the trail in response to Michele acting like a complete maniac. I followed at a sedate speed expressing my worry that at any time the sow was going to bust out of the brush in front of me, and then, in a flood of gore and blood worthy of a supernatural episode, I was going to die a horrible and painful death. Due to pig.
Michele laughed (LAUGHED!!!!!!) at me and said that that was not going to happen (She’s worked with them a lot for various studies)
My response was “that’s why you are in front…..” :). Because that’s how much I trust my ride and tie partner. Enough to follow her into certain death, but not lead the charge.
Moments later Michele squeals and points down the hill – THERE THEY ARE.
Me, instantly sobered by the thought of immenent death, quickly assessed the situation and an escape route.
Until I realized that she was pointing to a large bush and several small bushes. LOL. In her defense it was dusk…..The piggies were long gone. Bummer for Michele, thank goodness for my blood pressure.
We did the last mile in the dark – a successful completion to Michele’s first night ride.
Speaking of being prepared……Michele found out that night that she had managed to leave all her bedding at home. Oops. More sad for me and Kim was the cherry pie that had apparently decided to keep the bedding company and not attend the camping trip 🙁
Posted with Blogsy

4 Responses to Camping tips to be ignored – II