OMG I’m already behind on about a gazillion posts that need to go up.

Consider this the last Cache Creek post as I think this completes the random things I wanted to talk about.

Glueons
Remember me going through the steps of gluing on boots?  Now, various, seemingly minor steps were highlighted in the video as very important!  Do not skip!.

So what did I do on my fourth boot (a hind)?  I accidentally skipped one of those steps.  Specifically scuffing the inside of the boot with sandpaper ontop of the (already) scuffed factory surface.

Chalk this up to being DONE with glueing after spending 1 1/2 hours on it.  I was sweating.  I had completly exhausted my attention span for a reptitive mundane task.  And so….I forgot on of the do-not-skip-this-is-important-steps.

Turns out that step IS important.

I finished the ride with 3 glueons.  Guess which boot came off at mile 40?  Yep.

Oh, and for the sake of completeness, it took 30 minutes to take off the glueons.  And that’s without addressing the gobs of glue that still remain on her feet, that I will have to attack this weekend.

I’m not trying to discourage people from gluing on boots.  Heaven knows that I am grateful that there is alternative to both shoes and strapons if I need them.  But I AM reminding myself that glueons are not the easy simple answer and I really do love my strapons and gluing on is not something I want to get myself into on a regular basis.

Human footwear
Funder and I ride in the same shoes (I have the Lychee color).  She asked me recently whether she should plan on going up a size for longer rides because of swelling in the feet.

The rest of you probably could not care less about this section.  Feel free to skip down to the next section…..

I’ve done a ride and tie in these shoes and ran in them, but hadn’t done any real distance until Saturday.  I was a little worried because over the last 6 months, since I bought the shoes, my feet have gotten even wider and as a result after runs my little toes have been a bit pressure sensitive afterwards!!!!!!  (I’m barefoot almost full time now, with a shoe that absolutely doesn’t touch my toes at all and so my feet seem to still be adapting to my barefoot, standing lifestyle – just like a newly converted horse :)). Any swelling making these fit tighter was going NOT be good.

I’m happy to report that if anything the shoes fit BETTER at the end of the ride.  Absolutely NO impingement on my toes and NO pressure soreness.  They aren’t leather and I wouldn’t expect them to stretch to any appreciable degree, but I think some how they did.

The best thing about running in barefoot shoes was being able to do creek crossings that happen to be on my dismounted sections without worrying about my socks getting wet (because I don’t wear them) or my shoes getting soggy (because there isn’t enough shoe to get soggy).

The second best thing about these barefoot shoes is being able to throw them in the washer and get all the sweat, dirt etc off them after the ride 🙂

I HIGHLY recommend switching out the laces to whatever your riding footwear is to those locking elastic type laces.  This was the first ride I didn’t have to stop and retie laces or ducttape my laces.  And I think the elastic laces contributed significantly to my food comfort throughout the ride. 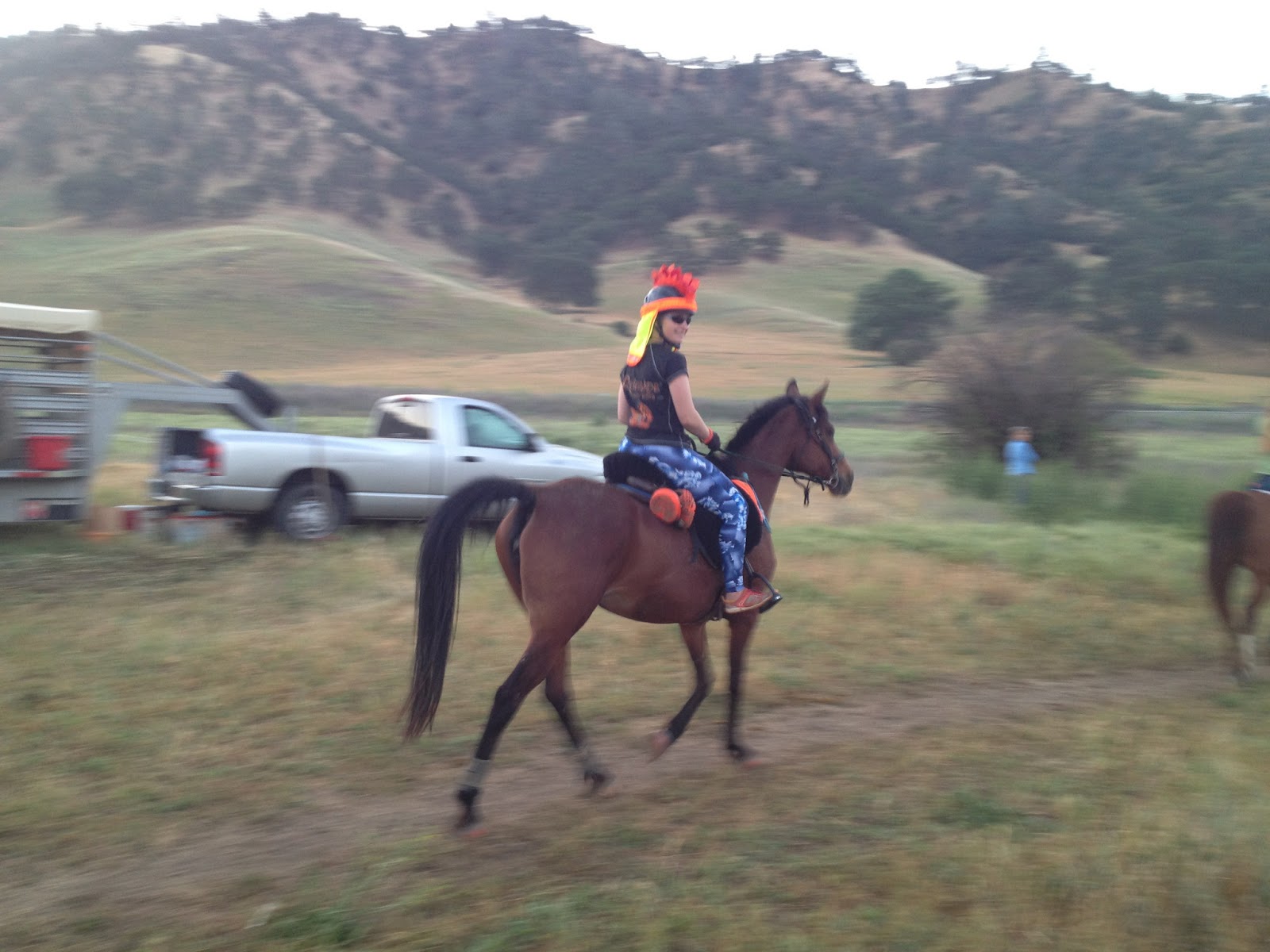 The helmet decorations…..
Even though orange is the BEST, I think I need a blue mohawk to set off my awesome tights.  What do you guys think?  People kept thinking I was a chicken :(.

And what about the thing that I have now dubbed “the helmet skirt”?  COMPLETELY AWESOME!!!!!!!!!!  OMG I don’t know how I lived without it.  It is so much better than the ducttape+hankerchief solution.  It doesn’t block noise or air flow, and doens’t hold heat because it is a perforated fabric.  It kept me a precieved 10 degrees cooler than it actually was, didn’t interfere with my sight or hearing.

The problem?  it’s yellow.  Don’t you guys agree that it should either be orange or blue?  I think so too.  So now I need find a perforated blue exercise fabric, deliver to my mother, and beg her to make me a helmet skirt. BTW – in case you missed it, she also makes my mohawks.  I think she should start a business that does nothing but helmet decorations :).

And now for the best part
Absolutely no bruises, chafing, or rubbing on my part.  I think that is a first for me.  I was symmetrically sore on each side of my body, and my entire leg (glutes, hams, quads, and calves) hurt equally instead of my calves being swollen and angry because of elyte and bracing issues in the saddle.  Getting off and running helped me IMMENSELY.

I was sore on Sunday, incapacitated on Monday (wonderful 48 hour delayed onset muscle soreness), better on Tuesday and totally fine on Wednesday.  And now for a very short soapbox – because I had no indication of an injury I did NOT take any ibprofen.  There is no good evidence that ibprofen reduces the duration of DOMS and it may actually hinder the muscle’s ability to adapt (ie get stronger from) to the work load that it was under.  With no evidence of an injury, and wanting to get the most bang for my buck for the amount of exercise versus muscle conditioning, I elected to go “vitamin I” free during my recovery period.  On the flipside, it IS important to reduce inflammation and so there is a balance between allowing a potentially inflammatory process to go on and its implications, and reducing it pharmacologically.  Based on what I have read, unless there’s a pathologic condition (such as an injury) causing pain, I’m comfortable with letting my body deal with the “normal” inflammation that occurs after a hard workout.  I don’t work out again until the soreness is gone. Something to think about :).

Alrighty!!!!!  That’s it for Cache creek.  Onto more exiciting things – such as crewing for a 100, pictures of the elyte system I attempted to describe, trailering, and some really cool new products.  🙂