Excuse me for being presumptuous…..but I have a New Years resolution for you.

“I will not give my horse bute, or any other NSAID if there is even an hint of dehydration”

(repeat the previous line, as many times as it takes to imbed it into your consciousness)

Separating out the companion animals from the food animals and setting the horse into the companion animal category for a moment……
–> horse owners are unique among companion animal medicine in that we often take matters of vetmed into our own hands. To our credit, timely intervention of horse owners often lessens suffering and contributes to a speedy, complete recovery. Many horse vets of comfortable sending their horse clients home with all sorts of prescription drugs such as bute for use as needed.

Great! You have drugs that you might need! And being full of common sense and discernment, my bet is that you use those drugs appropriately 99 percent of the time.

But there’s one risk that I don’t think vets emphasize enough when they hand over the bute.

DON’T EVER NEVER EVER GIVE BUTE TO A DEHYDRATED HORSE.

If you are like me, you’ve heard ride camp vets say that one danger of giving bute to a dehydrated horse is that it’s unpredictable in dosage. A normal dose can act like a much bigger dose in a dehydrated horse, which can be hard on the kidneys.

That was the extent of my understanding until I went through my renal (kidney) block last semester.

What I learned will keep me from ever ever EVER casually dosing my endurance horse with bute after a ride, or even the morning after a ride.

Historically, if my horse looked a bit sore after a ride, but otherwise was eating and drinking, I’d often give some bute to reduce the amount of inflammation and soreness in the muscles to aid in recovery. Especially if I had a long trailer ride in the morning and I felt like my horse was eating and drinking appropriately, its very possible that I would give a dose of bute in the morning before the trip home.

With the research highlighting the dangers of inflammation, both in my life and my horses I felt motivated to limit inflammation and soreness as much as possible.

However I will NOT be utilizing bute at rides or the morning after since learning the following:

1. Horses seem to be very sensitive to the effects of NSAIDs (bute) when dehydrated compared to other animals. During hypovolemia (decease in blood volume) that occurs during dehydration, adding NSAIDs to the mix predisposes them to papillary necrosis. It rarely produces clinical signs.

Just in case using all those long words and tame sounding sentences doesn’t quite produce the impact, let me put it a different way.

When you give your dehydrated horse bute, you cause parts of their kidneys to rot.

Necrosis doesn’t reverse itself. The amount of kidney your horse is born with is the amount of kidney it has to last them for their entire life. Kidneys don’t repair or replace themselves. Necrosis equals kidney that is lost forever,

You can lose a certain amount of kidney before you see any signs. it can be completely asymptomatic until one day your horse loses enough kidney that BAM! Kidney disease……

Considering that horses can be many percentage points dehydrated before there’s ANY clinical signs, why would you risk giving bute after a ride? Since it is documented that there is a certain amount of dehydration that occurs for every hour that a horse spends in a trailer, why would you bute before trailering the horse home?

2. What about the muscle soreness and inflammation? The human research that is coming out in exercise physiology is the only way to prevent delayed onset muscle soreness (DOMS) is to properly condition for the activity. Once youve over done it, the only treatment is time. Massage, NSAIDs (before or after) ice baths etc DO NOT REDUCE THE DURATION OR DISCOMFORT ASSOCIATED WITH DOMS. In fact, NSAIDs may reduce the muscles ability to adapt to the work load. 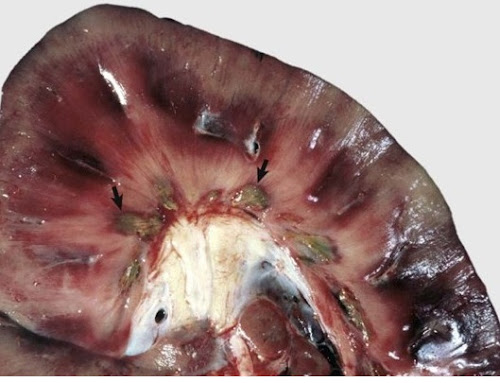 So I ask again? Why would you give Bute to a potentially dehydrated horse after a hard ride? To risk kidney damage? To hinder the muscles ability to adapt to the work out?

Of course, if your horse has an issue that requires veterinary care and the alternative to not treating is worse than the treatment, than of course you work with your vet to take care of the horse. However, recognize that a horse coming off of a long trailer ride, or post endurance ride is a compromised horse.  I personally would seek the advice of a vet before treating with any medications if I wasn’t at home, with a well-rested horse that I knew wasn’t metabolically compromised, including hydration status.

Information came from the 20 minutes book, Zachary veterinary pathology book(which is where the image came from as well), information presented at the 2012 aerc convention, and lectures in my renal block at vet school.

7 Responses to NSAIDs and dehydration