Just so you don’t think I’ve dropped off the face of the earth….

So……..if my posting is sporadic, or my posts full of errors…..of Freudian slips etc – you aren’t allowed to be too harsh :).

So…just in case I don’t get to this in a timely manner, here’s where I am right now:

1. Irish horse lent me a wintec to try out.  Rode in it yesterday and I do believe a 17.5″ is too big – which is weird because the wintec 17.5 dressage is perfect.  And the 17″ Solstice was a wee small.  So at this point I’ve decided saddle sizes are like pants and the numbers they come with don’t mean crap.  The plan is to put a full fleece on it – which may make it fit just right, in which case I will have to make a decision of which size I want to buy – sized with fleece or sized without.  Even with the saddle being a bit big, I could still get my leg underneath me and keep it there.  I feel balanced in it.  Farley didn’t sweat enough to put a nice dirt pattern on my white pad, but from what I can see so far it looks good!!!!  Certainly good enough to go to the next step and try it with a fleece etc.

2. Crupper training.  Haven’t started yet.  Should be fun.  Minx wore a crupper and all my driving horses do, so it’s not like it’s a foreign concept to me…..but Farley is definitely a crupper virgin.  :).

3. There are a couple of articles that I’ve had sitting in my inbox that I wanted to share with you…..but I have to face the fact that they are starting to pile up and so I need to do the easy thing and just give you the links and let you read them without a bunch of commentary 🙂

a. A good article on recovery and glycogen replinishment.  Some of the most interesting points in the article to me (all of them are almost direct quotes, with some editing):
General recovery notes
– Even in cool conditions, the horse’s respiratory rate will be elevated for 30 minutes to an hour after hard exercise–perhaps 60-80 breaths per minute for the first 10 minutes of recovery. Hot horses will have much higher breathing rates–as high as 120 or more breaths per minute, which reflects use of the respiratory system for heat loss. However, you should be concerned when the respiratory rate remains this high after five to 10 minutes of rest–this is an indication that your horse is overheated and in need of active cooling.
– You should measure the horse’s rectal temperature after hard workouts. A rectal temperature in excess of 105-106°F (40.6-41.1°C) indicates the need for aggressive cooling. In most situations, respiration and rectal temperature should be at resting levels one hour after exercise.
– Traditionally, horse owners have not allowed “hot” horses to drink because of a perceived risk for development of colic and cold-water founder (laminitis). However, with the possible exception of very hard galloping exercise (e.g., Thoroughbred racing), it is safe for horses to drink right after exercise. In fact, clinical experience has shown that thirst drive decreases with time after exercise.
– Electrolyte replacement will also help with the rehydration process. You have several options. On an ongoing basis, provide a salt block and some loose salt (in a bucket) in the horse’s stall. However, particularly during the summer months when sweat losses are higher, it is also a good idea to add up to one ounce of salt (or a commercial electrolyte supplement) to the horse’s ration, including the first post-exercise meal.

Glycogen stuff
– Key in developing training and competition schedules is to avoid back-to-back hard efforts that might get to the “bottom” of the horse’s fuel reserves. At least two days of light exercise between hard efforts is recommended.
– The rate-limiting component of full post-exercise recovery is replenishing muscle glycogen stores. This process seems to be quite slow in horses, taking as much as 48 hours for a complete return to “resting” levels. Research in other species indicates that early post-exercise feeding is needed for optimal glycogen replenishment, and it makes sense for us to apply these same principles to horses.
– Remember that glucose is needed for glycogen synthesis (not fat). This glucose will come from starch and sugars in the diet, so a typical sweet feed with cereal grains (the major source of starch) and some molasses is a good choice. After a hard, glycogen-depleting workout, offer small amounts (two to three pounds) of a grain concentrate ration as soon as 45 minutes after exercise along with good-quality forage. A second grain-concentrate meal can be given two to three hours later. An alternative is to feed a commercially available “carbo loader” product. These contain readily digestible sugars that can be used for glycogen synthesis. (A bit of Mel commentary: I learned at an AERC convention seminar that cereal grains do have a place in sports like thoroughbred racing where there is a lot of hard anearobic effort.  I wouldn’t necessarily use this comment in this article to add cereal grains to my horse’s diet without some additional research and what my alternatives might be, since I feel there is overwelming evidence against cereal grains in an aerobically working horse).

b. Good article at a vet doing some commentary on barefoot versus shoes.  (thank you Sharlene for posting this!!!!)
– I generally agree with everything that she says except:
“Taylor said if a rider is satisfied with his or her horse’s performance level and soundness, making the change from shod to barefoot probably will not seem worth the time and effort involved. However, if a horse has hoof problems or struggles with foot lameness issues, making the switch could be well worth the hassle, she said.”

So……I would argue that the best candidates for going barefoot are those horses that already have good feet and are probably going in shoes just fine.  I didn’t switch Farley out of shoes because she had issues – she had good hoof structure, didn’t lose shoes, didn’t pull shoes, travelled well.  In the end, the control I gained over having a barefoot horse versus being dependent on a farrier’s schedule of a 6 or 9 week shoeing cycle was much less hassel. While having a lame horse or hoof problems is certainly a good catalyst for taking off the shoes – I think that saying that barefoot is more of a hassel than shoeing does a disservice to the practice. I think that this thought also introduces a bias into the perception of barefoot versus shod.  If only horses that have hoof problems are going barefoot – it isn’t fair to compare the two groups (shod versus barefoot) in terms of hoof health and soundness.  Much better (IMO) to take a horse that has no problems in shoes and see what happens when they go barefoot and vice versa.  The discussion of whether a horse should/can/might go barefoot is different for the healthy horse with good hooves, than that group of horses with pathological processes in their hooves/systemic disease.

There’s an awesome quote on the sidebar of this article that I really love that talks about the heel of the hoof: 🙂
“If the back half isn’t right, you’ll never get the front part right,” she said. “Maybe the old adage, ‘no hoof, no horse,’ should become, ‘no heel, no hoof, no horse?’ “

4. Awesome hay feeder.  Saw this at one of my clients and was really impressed.  It’s pricey, but if there was any way I could swing this and I had my horse at home, I would – the ability to feed seperate from when I wanted to go out and ride, or being able to feed my horse lunch is worth a lot…..

Here are some pictures I took of my clients, and the website. 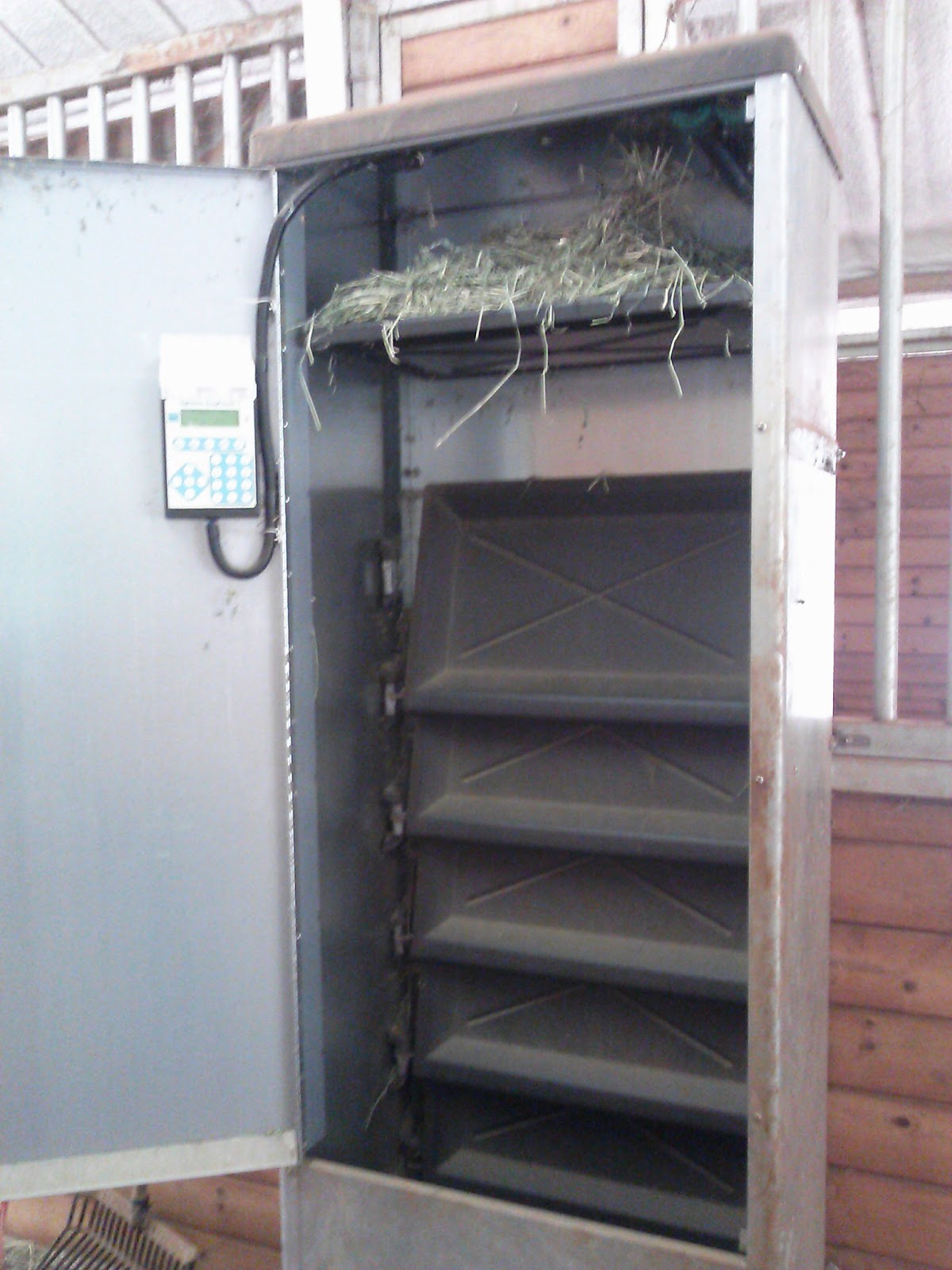 The hay sits on little shelves 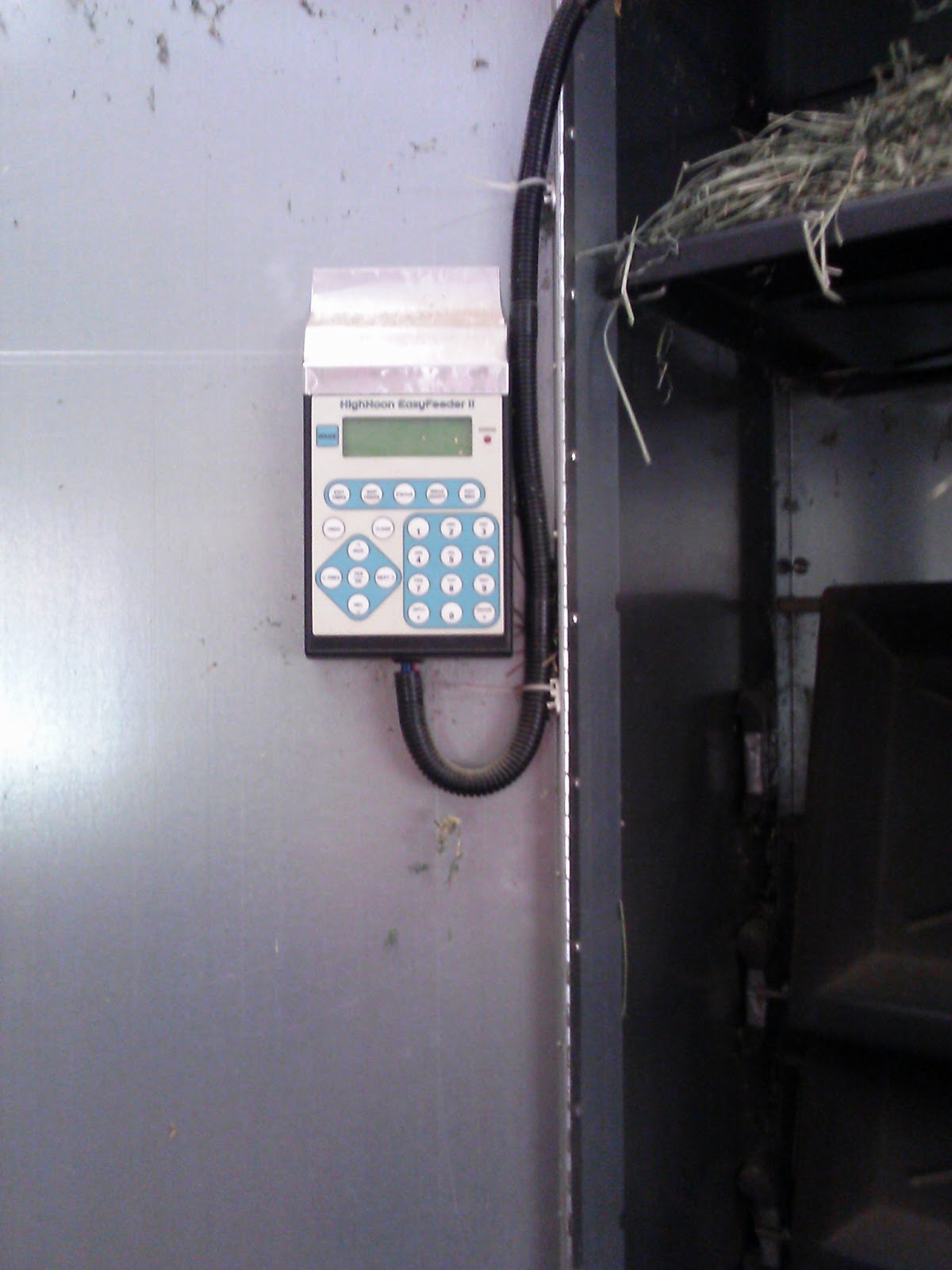 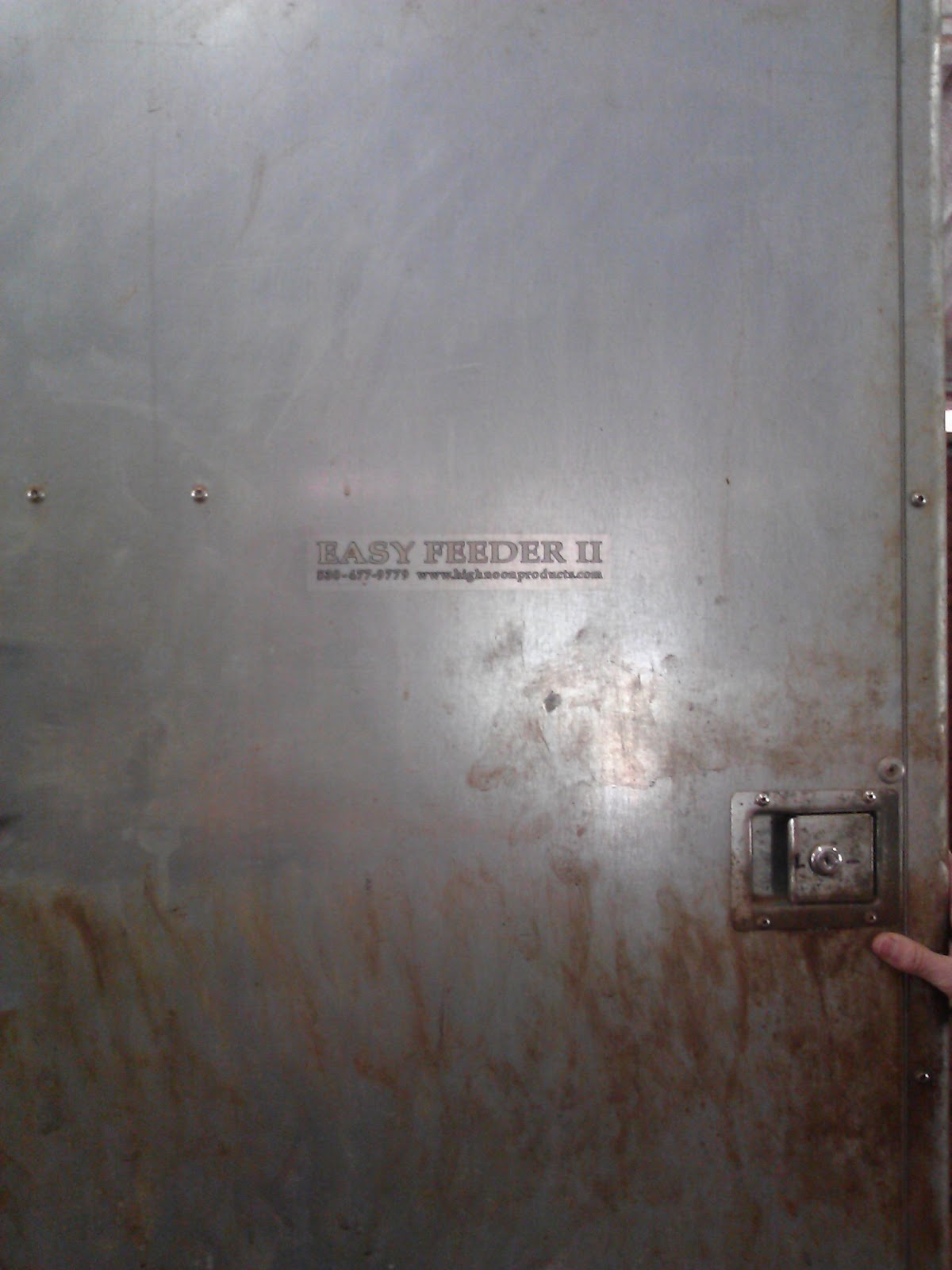 The door – she lets her horses hand out in the breeze way where the feeder is located, so she added a bar in front of the door so it doesn’t get damaged when the horse leans on it. 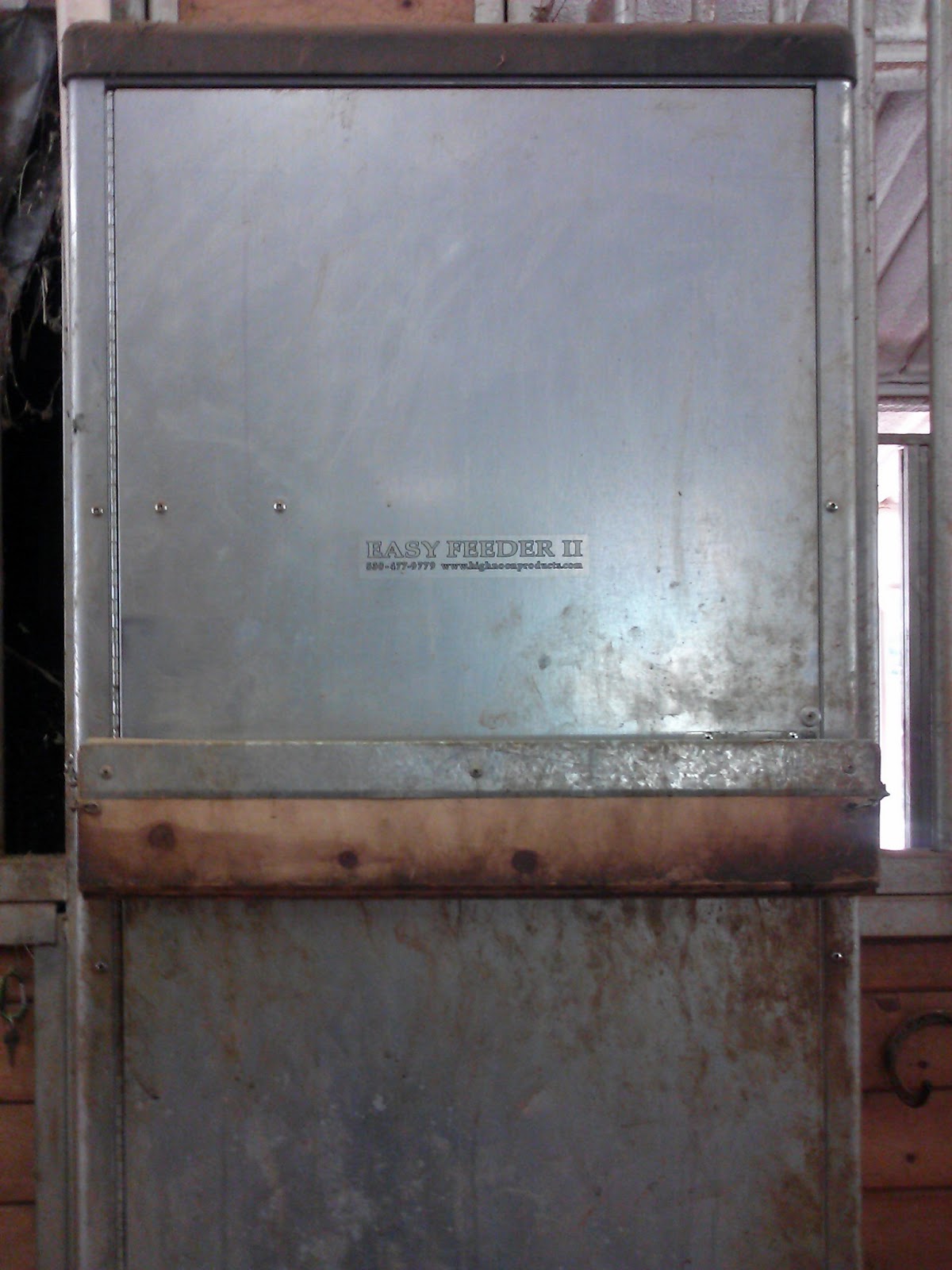 Batteries are in the top right hand corner. 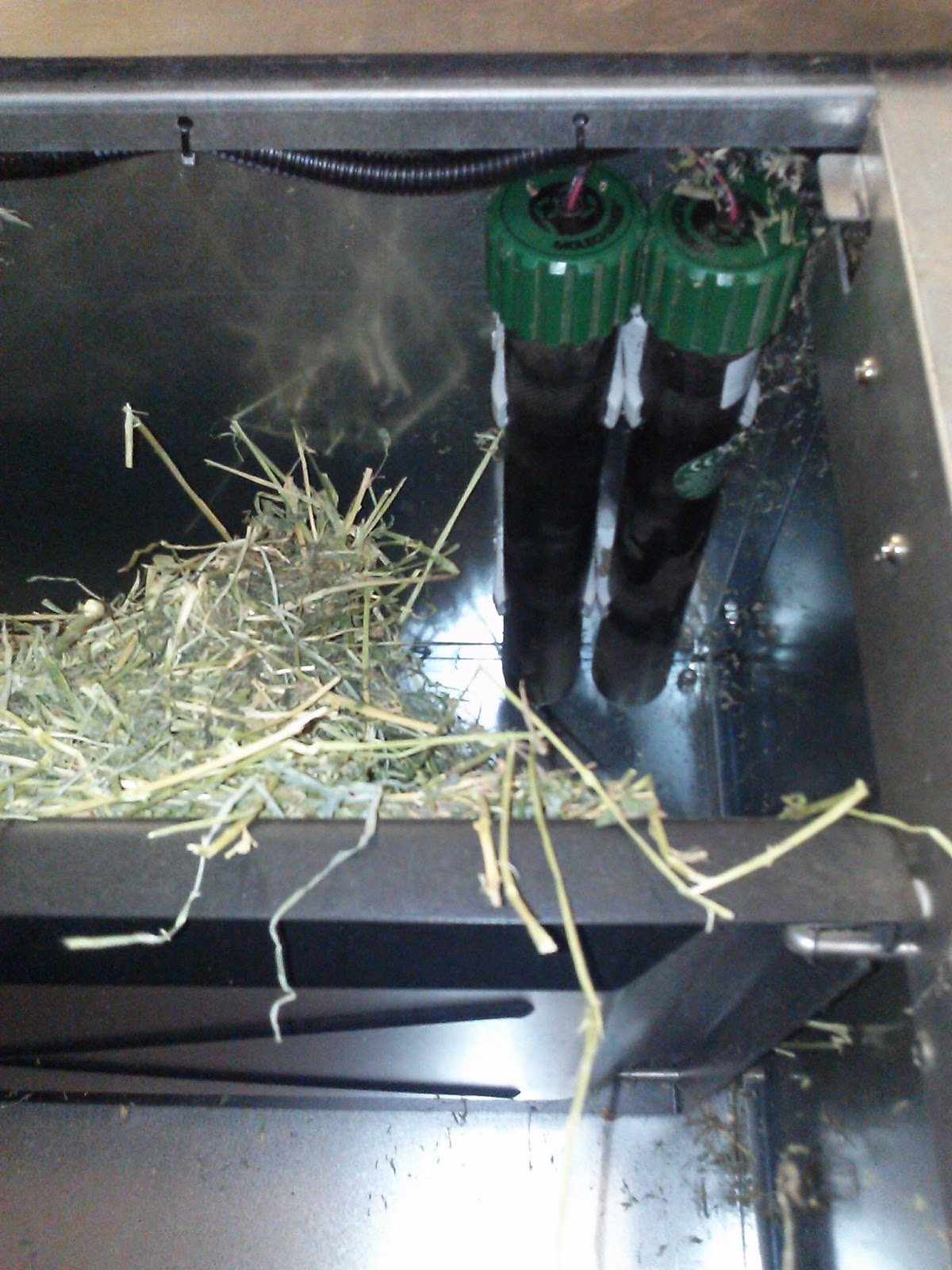