These “In Real Life” posts are designed to show how a conditioning program is being applied “real life”. It’s one thing to talk about the ideal program – it’s quite another thing to see how an actual person is applying it real life horse.  Maybe you are a new rider that is trying to find the balance between rest and miles. Or maybe you are like me – you’ve been doing this for a while with varying levels of success and you are interested in seeing what other riders are doing.

To view previous IRL posts, go to the category “Conditioning” and look for the tag “IRL”. 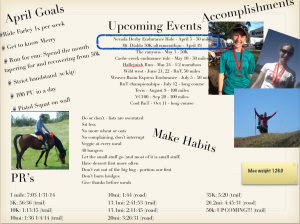 April WHIPPED by and was gone in a flash. Holy mackerel.  Time flies when you are having fun and that definitely was the case in April.

Things we did this month that were *new*

Especially after having an endurance ride early in the month, a month of light work isn’t a bad thing.  Her weight looks better now than at the beginning of the month.

BTW, I do filter out my other horse handling activities from these entries and focus only on riding so things like handling, trims, turn out etc won’t show up in these totals.

Not *quite* the one per week I was hoping for (although I’ll be close if I hop on tonight).

But really, if I’m being realistic, considering the excitement of getting Tig squared away and bringing Merrylegs home, AND starting 4th year (although no super hard time intensive clinics yet….) I did pretty good.

Most mileage in a month since December, least number of rides since February.

Summary: I WILL need to get in the saddle more in upcoming months, but now that I’m back down to 2 riding horses per month that should be doable. but it’s hard to second-guess what happened since she finished the endurance ride without issue (besides the girth balding post ride) and is sound and happy and is at a great weight (she does love her vacations….)

We are going to be prepping for the RnT championships in July.  Lots of practice with the actual mechanics of tying, mental training, and interval speed work, with some dressage mixed in for strength/fiber recruitment.

I kept the same general categories of runs, however I’m subclassifying them differently. Based on what my “goal race” is, they are either providing general, direct, or support in the categories of endurance or speed. (this concept is from the Science of Running book). My goal race is currently the mid July RnT championships. Races are classified according to what is described in this article. It’s very relevant to endurance RIDING so it’s on my list of draft post to talk about.

Summary: Lots of successes this month in running, but a lot of big holes too. I “left too much behind” as I moved towards my 50k. Too much tempo and distance and not enough speed and endurance strength. That interval run that is listed before my 50k wasn’t really an interval run – I was too fatigued to do much beyond shuffling along, which means it’s been something like 6 weeks since my last *real* HIIT when I ran my 50k. One of the mottos that the Science of Running Book has under rules of training is to both “build and maintain” and to “never leave anything behind”. It was appropriate with a 50k in front of me that HIIT weren’t the main focus of my training (it’s more support and not direct), but I shouldn’t have let my love of tempos push it totally to the background.

Next month will be focused on building support endurance and speed, which means I’ll be going both longer and slower than than I expect to at the RnT, and going faster and shorter.  I think the HIIT workout that will be my best friend this month is: longer run sprint intervals than I typically do with rest intervals where I do squats etc. to recruit more muscle fibers, followed by another run sprint interval to teach those newly recruited fibers to work!

Looking forward to May!

I have some events on the calendar but with my on call schedule and various other commitments I’m not sure what’s going to happen yet.

Today I got on the treaddesk that resides in the garage (ever since failed at house tetris and could NOT get into through the door without having to take it apart….) with my computer and cup of coffee this morning because I felt like I couldn’t sit down any longer and needed to MOVE. I take that as a good sign that my body is thriving on the challenges it’s be thrown this month. 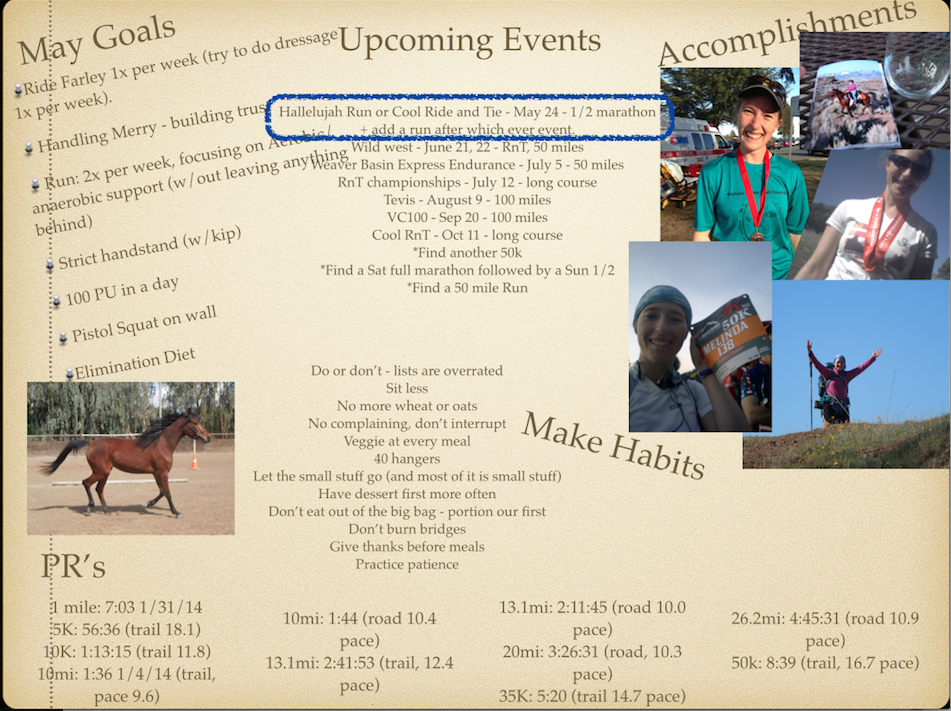